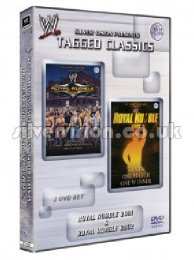 I love the Royal Rumble, it is one of my favourite WWE PPVs and one I simply do not miss. It is such a simple concept, that it is one of the few WWE PPVs that I can guarantee I will enjoy no matter what.

(For those who don't know: Two men start in the ring, the object is to toss your opponent over the top rope and have both feet touch the floor. Every minute, another wrestler enters until all thirty have entered. The last one in the ring, wins a title shot at Wrestlemania.)

World Tag Team Championship
Edge and Christian vs. Dudley Boyz
These two teams were so great together that I could watch their matches all day, every day. This was a great match. Great back and forth and just some wonderful moments throughout.

Women's Championship
Ivory vs. Chyna
This was a time when the Women's title actually meant something-not much, but something at least. There are those who are mean towards Chyna due to her recent exploits, but at this point in her career I shamefully admit she did look quite good and was as good as any women's wrestler. It was just a shame she never wrestled many women and was sent along the Inter-gender gimmick route. This match was pretty good and though not exactly the mat classic that came before or after, it's still a good match.

WWE Championship Match
Kurt Angle vs. Triple H
The highlight of this match is in the corner. Trish Stratus and Stephanie McMahon in the corner is enough reason to watch this match. This is a pretty good match which doesn't become boring with a lot of rest holds and excessive violence… though there is some of that later courtesy of a surprise appearance by another man. A great match that did wonders to solidify Kurt Angle as a champion, it's true, it's true!

Royal Rumble
The highlight of this match is undoubtedly the domination of Kane. As with all Royal Rumbles this was a great match of excitement, thrills a few shocks and one hell of a deserving winner.

Extras are a little run of the mill, interviews with Mr McMahon, Right to Censor, Edge and Christian, Kurt Angle and Drew Carey can be ignored unless you are big fans, fan prediction of the rumble is nice but too short to actually mean anything and finally a bonus match of Lo' Down vs. Kai En Tai. This match was just painful, but watch the opening simply for Kai En Tai on the mic, as I had forgotten just how funny Funaki's 'Indeed' was.

World Tag Team Championship
Tazz & Spike Dudley vs. Dudley Boyz
I forgot just how hot Stacy Kiebler was and this match is full of amazingly unnecessary close ups of her to prove it. This was almost an ECW reunion… only without the excessive ECW violence. But this was still a good match to start off the show with.

Intercontinental Championship
Edge vs. William Regal
A good match between the two, with a nice build. Edge wasn't quite the star he is today, but this was certainly a good step towards that.

Women's Championship
Trish Stratus vs. Jazz
Actually forget Stacy… Trish is THE babe of the WWE in 2002. I do miss Trish, as she was one of those divas that could have just been a pretty... no scratch that… a gorgeous face. But instead she worked to be a decent wrestler too. This wasn't exactly a Five Star mat classic, but for a women's match it was pretty impressive.

Street Fight
Ric Flair vs. MrMcMahon
Flair and McMahon are both crossing the 50 year level by this point. This tries to be technical, but can't escape the fact that Vince doesn't know how to wrestle. However, Flair proves the claim that he could have a match with a broom and make it work.

Undisputed WWE Championship
Chris Jericho vs. The Rock
Both of these guys were in their prime at this point. Jericho had just become the Undisputed Champion and this made his Heel persona even better. The Rock was also in his prime and there was quite frankly no better wrestler on the mic than The Rock. In the ring I could watch either of these men during this period as they were as smooth as any wrestler ever could hope to be.

Royal Rumble Match
The match was slightly marred by the fact it was fairly obvious who was going to win from the beginning. But I have to say the performance by Undertaker and his reaction to being eliminated by newcomer Maven was quite shocking. The explosion of Austin when he arrives is just wonderful to watch too. One thing that is noticeable is to see how many people from WCW/ECW are in this Rumble who actually mean anything. It seems only Booker T and RVD get any kind of reaction from the crowd and just how popular the WWE wrestlers are. This event shows just why WWE won the war in the end.

Extras include some interviews with Kurt Angle, Post-Match interviews with various people, an excellent 'What?' interview with Stone Cold, a short (actually I should say too short) look at Ric Flair and Triple H's return to WWE from Raw. These are all pretty hit and miss depending on your view of the person it focuses on. One odd extra is Tazz and Spike Dudley watching their match and commenting on it as they do. This probably would have been better as an alternate commentary over the match as it just looked a bit odd, as if they had nothing better to do.

Royal Rumble 2001 and 2002 are a perfect double pack as even if you don't enjoy the singles matches (and really the Benoit/Jericho Ladder match is one of the best matches of 2001 and The Rock/Jericho match was also great) you can always watch the Rumble matches. It seems no matter how many times I watch them I always seem to enjoy this type of match more than any other… bring on Royal Rumble 2003/2004!