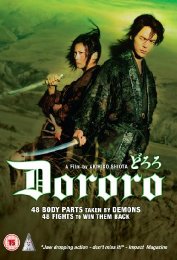 DVD
Sword Oratoria: Is It Wrong To Try To Pick Up Girls In A Dungeon? On The Side Collector's Edition Combi
Related Articles

What does it take to be known as the God of manga? It surely can't be just one sole title, but to my shame, if I were to list the number of Osamu Tezuka titles that I know of, I would have to stop counting after Astroboy. That's despite the fact that I even own Metropolis on DVD. It's like being known as the king of pop on the strength of just one album… Anyway… It's ridiculous, but in the west, it's really only Astroboy that has made the leap to popular consciousness. Take a look at the extensive biography at Anime News Network to see just how much Osamu Tezuka has contributed to the manga and anime industries, and just how much his influence is still felt today. It may come as a bit of shock to us casual fans that not all of his output was kid-friendly child robots. How about a child born without most of his body, who after growing up has to hunt down the demons which took his limbs and appendages, and slaughter them to get his body back, one piece at a time? Not exactly your Saturday morning 'toon… Dororo was first published over 40 years ago, but is still garnering awards today. The anime came out in 1969, but it wasn't until 2007 that someone decided to give it a live action, theatrical spin. This movie now comes to us courtesy of those nice people at MVM. 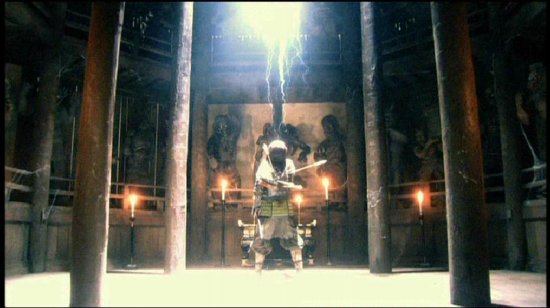 Dororo is a young thief, a girl masquerading as a boy to stay alive in a harsh world, after the power hungry warlord Kagemitsu Daigo killed her parents. Working the crowd in a bustling marketplace, she runs into the wrong place at the wrong time, to see a demon being killed by young man with a sword for an arm. If that isn't bizarre enough, what happens next certainly is. Screaming in agony, his leg falls off, crumbles to dust, and a new one grows in its place. Fascinated, but horrified, it falls to a conveniently passing minstrel to fill in the blanks. The man is Hyakkimaru. A medical shaman found him as a baby, wrapped in a blanket, placed in a basket, and set adrift on a river. This baby was lacking limb, eyes, ears, a nose, even internal organs. But the knowledge the shaman had was immense, and as he raised Hyakkimaru as a son, he also fashioned artificial limbs and organs for him, and trained him how to fight. After the shaman died, a voice came to Hyakkimaru and told him the truth of his past, how his body was split into 48 pieces, and given to 48 demons, demons who now live among the world, masquerading as humans, and preying on the people around them. The mystical blade hidden in Hyakkimaru's left arm is the only thing that can kill them, and by doing so, he will take back the body parts he has lost, one by one. 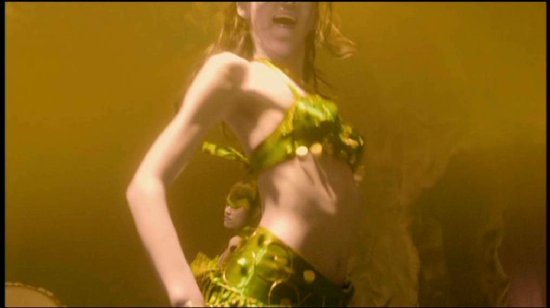 That sword fascinates Dororo, who believes it will be ideal to carry out her vengeance against Kagemitsu Daigo. So Hyakkimaru picks up a travelling companion, ostensibly to help him defeat the demons, but really she's just waiting until he gets his real arm back, and the blade drops off so that she can steal it. As is often the way, the two begin to become friends as they travel, but when they battle a particularly nasty demon, that friendship is sorely tested. Hyakkimaru learns the final piece of truth about his birth. Kagemitsu Daigo is his father, and he made the deal with the demons to sacrifice his unborn son, in exchange for ultimate power. Dororo wants Daigo dead, but she knows that if Hyakkimaru commits patricide, he'll be condemned to hell for all eternity. It looks as if this friendship is over before it even got started. 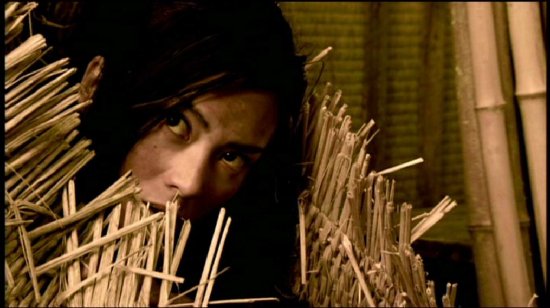 Now that's what I like to see on Eastern Cinema DVDs, a native film to PAL transfer. Clear, smooth, no ghosting, it's a world away from what we normally get. Actually, not so much this time, as while Dororo is certainly smooth and clear, detail levels could be a bit higher, and I found some of the skin tones flat, and lacking in definition. Also darker scenes, filmed in natural light tend to suffer from grain and are even lower in detail. Don't get me wrong though, it still looks much stronger than the typical standards conversion. That landscape may look familiar, vast grassy plains, tall mountains, and the wonders of nature. Daigo's castle is in a particularly familiar looking valley, and when you see the film was shot on location in New Zealand, you realise that we are in LOTR country, the natural place to film a fantasy movie it seems. 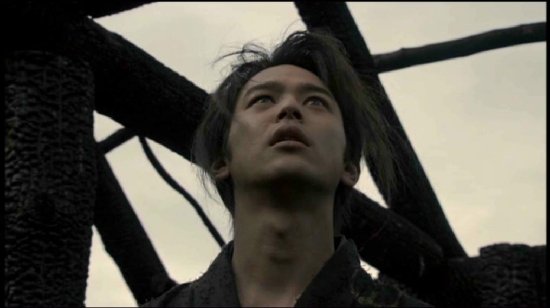 You have a choice between DD 5.1 and DTS Japanese, along with optional English subtitles. Whichever you choose, the surround is effective, the dialogue is clear, and the action sequences come across well. I thought the music was a little quirky, and on occasion didn't seem all that well suited to the subject matter.

The case comes with a nice reversible sleeve, and the disc has the obligatory animated menu.

On the disc, the major featurette is the Road to Dororo, which lasts 36 minutes. In it, you get about ten minutes of behind the scenes stuff, with interviews and b-roll footage. Blink and you'll miss the post-production, and then there are hefty chunks of the Japanese and then the Hong Kong premieres. It's all pretty EPK.

There are 8 minutes of deleted scenes, most yet to have effects applied, four flavours of trailer are here, and 15 images in a stills gallery.

The disc rounds off with the trailer for Cutie Honey. 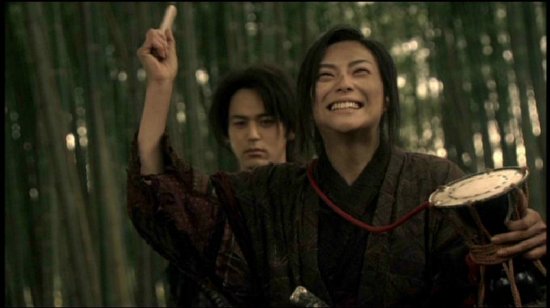 How's your suspension of disbelief? It's something of an atrophied sense nowadays, with photo-real CGI taking most of the hard work out of watching films. When I were a lad, we had to do a fair bit of pretending, to make our films come to life. We had to imagine that the monkeys in the Wizard of Oz weren't on wires; we had to pretend that the shark was real in Jaws, but no longer. Except you may have to dust off that long-forgotten skill for Dororo, as I found it to be an enjoyable movie, with a-list acting, a great, entertaining story, wonderful locations and effectively directed, but with woeful b-movie special effects. Yes, CGI is used liberally, but the results don't really stand up to scrutiny. The demons and monsters, make-up and practical effects, animatronics and yes, even puppetry, all looks woefully artificial, unreal and not even a part of the film. The reason is explained in the extras, Dororo is meant to be a family film, one that children can watch, and the way to reduce the gore and the fear factor is the make the villains so laughably childish and cheap-looking, that any sense of realism vanishes. That didn't make the slightest bit of difference to the BBFC of course, who rated this film a 15 regardless (Some of that may be down to the subtitles getting a little fruity with their word choices though). But, brush off that old suspension of disbelief, and it's possible; indeed even inevitable that you can enjoy this film, and that even a man in a rubber suit and mask can prove menacing if you let him. 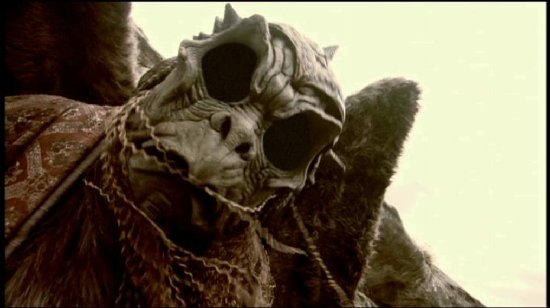 I have now experienced three of Osamu Tezuka's creations, a little bit of Astroboy, Metropolis, and this movie, Dororo, and I'm beginning to see something of a common theme. Dororo can be seen as a Samurai Pinocchio, with Hyakkimaru 'created' by the shaman from the limbless and sightless child discovered on the river, and he's been seeking to regain his humanity ever since, by reclaiming the body parts taken from him by the demons. Robotic children in Astroboy and Metropolis, the demi-homunculus in Dororo, there certainly are commonalities, but Dororo, with its mysticism and supernatural elements is much more of a fantasy. 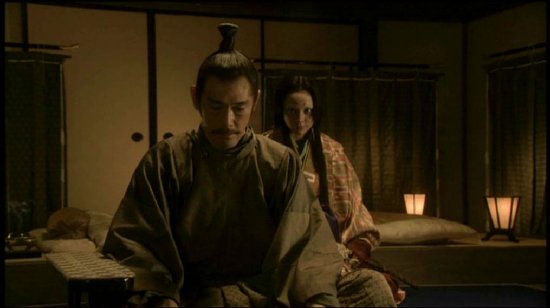 The story is pretty mythical as well, with a power-hungry warlord sacrificing his own son for the strength to defeat his enemies, and that abandoned son having to seek out his past and find his place in the world. It also uses fate and destiny as devices to paper over any convenient plot holes. The child happens to wind up in the care of the one man who can give him a body, and when Hyakkimaru is orphaned once again, a ghostly voice tells him of his destiny. A wandering minstrel is always in the right place and the right time to supply necessary exposition, as well as the sword that can defeat the demons. Of course, in a mythic tale, things do indeed happen because they are fated to, and as such I can give Dororo a lot more leeway than I would other films. 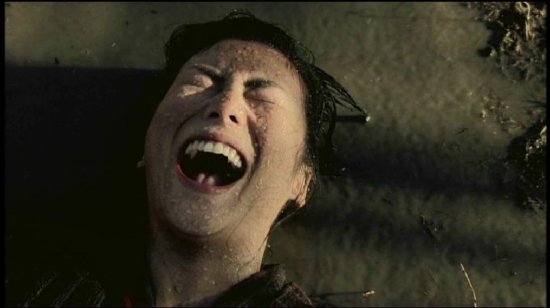 Where Dororo really grabbed me was with the performances, especially from the central duo of Dororo and Hyakkimaru, who had a great onscreen chemistry. Kou Shibasaki brings the young thief Dororo to vibrant life, playing her as an energetic trickster, lively, brash, clownish, and vivacious. She's a great foil to the comparatively morose Hyakkimaru, but she also carries off the more reflective moments strongly and with delicacy. Hyakkimaru as played by Satoshi Tsumabuki is much more emotionally subdued; especially when we first meet him, as he coldly cuts down a demon and retrieves his leg. It's through travelling and getting to know Dororo that he slowly begins to recover his humanity, not by killing demons. Gradually he opens up and becomes warmer. The two begin to travel together, hunting down demons, and there is a great running joke early on around how those demons die. When we first meet Hyakkimaru, he's 'seeing with his heart'. His magically made senses don't work, and he even has to speak magically as he has yet to find his tongue. As the film progresses, and they find more and more demons, it's a chance for the filmmakers to indulge in gratuitous amounts of CGI, and stunt fighting, but the odd moments when Hyakkimaru regains his senses are brilliantly accomplished, and truly draw you into the characters. 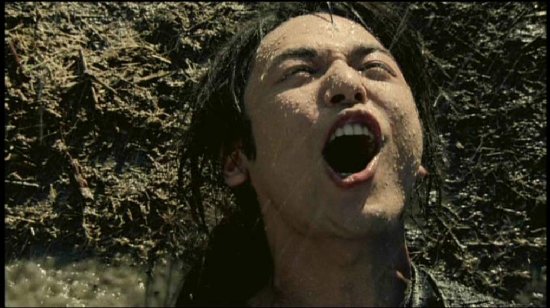 Dororo is entertaining, exciting, fast-paced, energetic, moving, funny and ultimately a very satisfying and enjoyable film. That's if you can play make-believe that an all too obvious brightly coloured CGI creation is actually a scary demon. It means dusting off skills that may have lain dormant for twenty years, but come on! Once upon a time we watched Ray Harryhausen movies without whinging about realistic effects. Make the effort for Dororo; it will pay you back tenfold. Personally, I was utterly delighted when I heard earlier that Dororo 2 and 3 had been greenlit in Japan. After all, a single movie isn't enough to hunt down all 48 demons.