DVD
Man in the Iron Mask, The (UK)
Related Articles 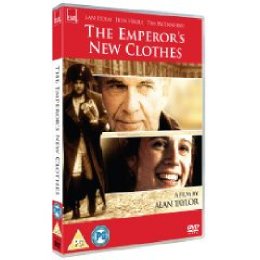 Synopsis:
THE EMPEROR'S NEW CLOTHES recasts history in 19th Century France. Based on the novel by Simon Leys, The Death of Napoleon, the film supposes that Napoleon Bonaparte escaped from exile in St. Helena and returned to Paris in 1821, whereas the history books say he died that year. With imaginative photography, beautiful costumes, an upbeat orchestral score, and solid acting, the film is a fanciful, witty, comedic delight. Starting out in St. Helena, Napoleon (Ian Holm) enjoys a pampered existence, even as a prisoner, and is treated with great respect by those who serve him. Therefore, when he devises a scheme to trade places with a servant on a ship so that he may escape, the deckhand he chooses (also Holm) thinks he's the luckiest man alive, waited on hand and foot in St. Helena. Napoleon returns to Paris under the guise of this ship servant. When he arrives, he expects to be recognised, received with joy by his people, and made emperor once again. Instead, he is ignored. Days later, the deckhand in St. Helena dies, literally erasing Napoleon's existence. From there, Napoleon must adjust to daily life in the free world as nothing more than a simple Everyman. Fortunately, he finds a loving wife, Pumpkin (Iben Hjejle), to help him with the transition.