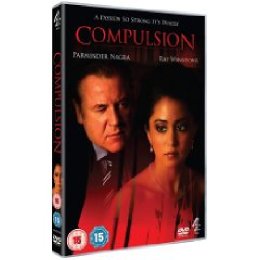 It sounds like a blasphemy to say that Ray Winstone can do nothing, but sub-gangster, gruff voiced goons. You know, the kind who always seem to know how to get things and can always win a fight, no matter how many people are outnumbering them. I mean Ray Winstone is 'The Daddy' right? He's established that in such films as Scum and Nil By Mouth, but really, as much as I would love to say how realistic these performances are, I can't help but think: Is that really all you can do? Not, suggesting that he start doing a sketch show or anything, but something that shows he can be more than just 'The Daddy', would be nice.

Compulsion is possibly the simplest, most cliché-ridden TV-film that I think if you gave any writer twenty minutes and told them it involved an Indian family they would have come up with the same premise. Anjika Indrani (Parminder Nagra) has just finished her degree and soon becomes aware that her father wants her to marry the son of a business associate. As usual, Anjika is angry and doesn't want her life to be controlled by her father. To get out of it, she is offered help from her father's creepy chauffeur Flowers (Winstone), but this proposal may not be the right decision.

If this had been divided into two or three episodes or parts, I would have found Compulsion to be intriguing and there are natural stopping points throughout where I must presume advert breaks went, but at its feature length of over ninety minutes I became very restless and bored, very quickly. Winstone and Nagra are simply not strong enough within their roles and this is not the fault of their acting, it is simply the script that is faltering. At times, I found myself wishing that something exciting would happen, and yet nothing did. Sex scenes between Winstone and Nagra where a bit like watching Steve Martin and Claire Danes in Shopgirl or William H Macy and Maria Bello in The Cooler, it just wasn't sexy in anyway shape or form. The convoluted story, has possibly the stupidest ending I have ever seen and to apply logic to anything that happens in the last ten minutes would make my head hurt.

There are no extras to come with this and in a way I was kind of hoping for some interviews or a commentary, just to see what the creators were actually trying to create with this. If it was to drag up the old stereotype that all Indian families want to arrange their children's wedding then it succeeded, if it was something else, then it must have lost me somewhere.