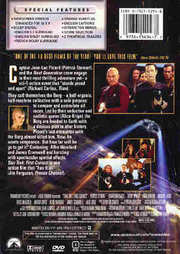 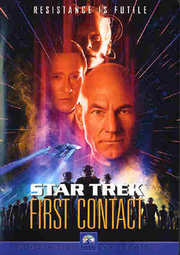 Synopsis:
The time is the 24th century and the ship is the newly commissioned Enterprise-E. It`s captain, Jean-Luc Picard, has been ordered not to interfere in a combat between a Borg Cube and ships from the Federation. However, seeing the Federation is about to lose, Picard ignore his orders and take command of the defending fleet. With his knowledge of the weak spot of the Cube, they destroy it. However, a small part of it escapes and plot a course directly to Earth. The Enterprise chases it and enters a time distortion created by the Borg. They end up in the mid 21st century, their only chance of stopping the Borg from assimilating Earth being to help Zefram Cochrane make his famous first faster than light travel to the stars...

Before I start I want to get my personal bias out of the way - I am a huge Star Trek fan, I`ve watched all the episodes and even was one of those people who enjoyed Star Trek Generations! This means that I loved the movie, but it also means I want a little more from the disc, with the available resources of the Star Trek franchise, and the amount of behind the scenes footage available you`d expect somthing special from this disc, so what to you get?
As for the movie it`s Star Trek so this means you either love it or you hate it right? Well yes, but this movie was more than a double Star Trek episode at the cinema, it was a full on action movie, but with a deeper story line and fully defined characters. The direction from Jonathan Frakes was excellent, and all together the movie bonded it a very entertaining piece of science fiction.
As for the disc itself it`s both very good, and also quite disappointing. Once again Paramount have lumped the movie onto a single layer, which although means no layer change problems, it also means a fairly low bit rate, which once again is clearly visible when compared to discs from Universal and New Line. The anamorphically enhanced picture is still a treat to behold, and the space battles are just so much better than what you would ever get from an average show, it`s just a shame that with such a low bit rate you can tell it pixellating slightly with a few artifacts thrown in for good measure.
The sound is once again superb though, utilising the preferred 448Kbps transfer compared to the usual 384Kbps, means deeper and richer sound, and with a soundtrack by Jerry Goldsmith it really enriches the whole movie experience. The sound effects are beautifully placed around the sound field, never failing to encompass the viewer, and once again is a great advertisement for 5.1 surround.
One huge problem with this disc is the lack of additional features, with so much footage available, and the amount of interest Jonathan Frakes has for his career, especially this being his first directorial role for a movie, I`m sure he could have at least been roped into including a commentary. Maybe this is due to space limitations of the single layer disc, so all we get is a trailer and a teaser trailer for the movie we`ve already bought, which although nice isn`t exactly fulfilling!
Overall then it`s a great movie wrapped up onto an empty disc, and although it was a must have for me, I can`t really recommend it to anyone who didn`t really enjoy the movie, because in this case that`s all you are getting, what a shame!
posted by Neil Beatson on 27/1/2000 16:58
8 / 10

Came together with the Collection Box. Good quality and great if you like the movie and Star Trek in general. But for extras...poor...subtitles and a trailer.I guess there isn`t anything else great about the film-making.Anybody heard of computer graphics? Special effects featurette??
posted by OdinW. on 24/8/2000 02:37