Mushi-Shi: The Complete Collection by J?? Odagiri
Not available 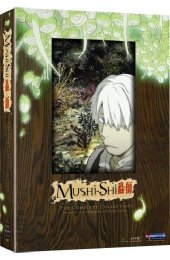 Synopsis:
Neither good nor evil, they are life in its purest form. Vulgar and strange, they have inspired fear in humans since the dawn of time and have, over the ages, come to be known as 'Mushi'. Ginko sees what most cannot - Mushi, unexplainable forces which have alterd the course of mankind since the genesis of life. Walking quitely through nature, Ginko investigates these rare embodimets of the primeval, aiding those plagued by the supernatural phenomena which surround the Mushi for reasons yet unknown. He is a Mushi-Shi, one with the ability to peer into the places where the Mushi hide in plain site.