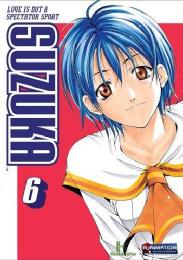 It has been three days since I watched volume 5 of Suzuka, and with Yamato and Suzuka's volatile relationship reaching new rollercoaster levels of uncertainty, that has had me just a tad frazzled ever since. I'm just glad that I can put volume 6 straight into my player and find out if love and happiness is actually destined for the two, or if nothing but disappointment waits. Of course this is only possible because I imported the Region 1 discs. The UK release date of Suzuka's final two volumes still remains a mystery. I know I'm a great advocate for supporting the UK anime industry, and this makes me out to be a hypocrite. But better a hypocrite who knows how the story ends, than to be righteous and ignorant.

Yamato Akitsuki is in the first year of High School, and to highlight the significant change in his life, he's decided to leave Hiroshima and head for the big city, Tokyo. The only way he can get away with this is if he lives with his aunt at her apartment complex. Aunt Ayano runs a girls' dormitory for high school and college students, renowned for its complex of baths, and Yamato will have to earn his room and board by acting as cleaner cum handyman. So far so Love Hina, but it's when he encounters athlete Suzuka Asahina that his life changes. He's entranced by the graceful high jumper; she thinks he's a dork. It's a match made in bedlam.

Previously, with their friendship getting back on an even keel, Yamato decided that the only way to get Suzuka to take him seriously was if he excelled as a sprinter, as a fellow athlete. He also had in his mind that Suzuka was still hung up on Kazuki Tsuda, her mentor from junior school, and unless Yamato exceeded his potential, Suzuka would never take him seriously. The story concludes in the four episodes, presented on this disc by Funimation.

23. Encouragement
Yamato realises that he's losing speed in the second half of the hundred metres, and unless he can delay that final burst of speed, he'll never be world class. It means changing his running style completely, but with just two weeks to go until the Metropolitan meet, and his rematch with Emerson Arima, it seems like an impossible task. Even Suzuka is sceptical of his ambition, and continues to shoot him down, even when he's trying harder than ever before. But with Yamato's sudden personality change, Suzuka doesn't even know what she's feeling anymore.

24. Disappearance
The day of the competition arrives, and Yamato has it all planned; beat Arima, win the race, become number one in Japan, and then confess his feelings to Suzuka. It doesn't quite work out that way. Depressed and frustrated, Yamato finds refuge in his room. He isn't expecting Suzuka to try and cheer him up. She's even trying cooking her speciality again, boiled eggs. Yamato decides it's now or never, and tells Suzuka how he feels. Only he doesn't know that the way he tells her is absolutely the wrong way, and Suzuka runs off in tears.

25. Loss
Yamato's frantically searching for Suzuka, but she's taken refuge at the shrine, trying to deal with her memories. Honoka's a little surprised to see her there, and is initially understanding, but when it becomes clear that Suzuka keeps on running away, and lying to herself, she becomes frustrated and gives her a piece of her mind. If Honoka's hoping to convince Suzuka to be honest with herself, it doesn't work. When Yamato finally catches up to Suzuka, he's just as determined for her to stop being afraid of her feelings, but it looks like he's just gone too far this time.

26. Cool Wind
It's all over. Suzuka isn't talking to Yamato, she doesn't even look at him anymore, and even Yasanobu reckons it's time to give up. Besides, Yamato isn't going to apologise when he knows that he isn't wrong. An apology wouldn't make any difference at this point anyway. Then suddenly Suzuka invites him to go with her to see Kazuki Tsuda's grave.

Suzuka gets an unproblematic 4:3 transfer, the difference here being that the Region 1 NTSC disc is a little sharper and crisper, if of a lower resolution. I also learned here that the US discs get multi-angle credit sequences, and while the re-edited English credits have those problems with aliasing, the Japanese credits are unblemished.

The animation itself is dynamic but fair, the character designs are very pleasant, and the backgrounds are simple but effective. This is a show that really doesn't need the bells and whistles, and does perfectly well without them. The pastel palette, and the lighter feel, all contribute to a generally pleasant atmosphere and the show does very well in that respect.

You get a choice of DD 2.0 English and Japanese, accompanied with translated English subtitles and a signs track. This isn't an action led show, and the dialogue is clear throughout, so the stereo track is called on to do little more than establish some atmosphere and music. I tried a little English and the dub is up to Funimation's usual high standard, but my perennial bugbear of teenaged girls apparently voiced by mature women is apparent here with the English voice actress of Suzuka. Your mileage will differ depending on how you like your dubs. Incidentally, this is one of those dubs where the theme tunes are re-recorded with English lyrics. I haven't seen that in a while, but it's a pleasant addition.

Suzuka comes in an Amaray case with a reversible sleeve. The disc autoplays with a trailer for the xxxHolic/Tsubasa double feature, and the only way to skip it is with the title button on your remote.

On the disc, you'll find the textless credits, the Aoba High School Yearbook gallery offering a 45-second slideshow, and trailers for One Piece, School Rumble, Tsubasa, Negima, Origin, Instant Star, Degrassi: The Next Generation and the Z-Store.

Suzuka and Yamato's story comes to an end here, and I'm feeling curiously ambivalent about it all, vaguely unsatisfied. If anime could have a soap opera genre, this would be it, but the thing about soap operas is that they never end, they just keep on going and going. They introduce their characters and tell their stories, and once those stories end, they make more stories, introduce new characters, and just keep churning out the episodes. It's easy to be contemptuous of the genre, but once you are hooked; you need a regular dose, just the same way as you need caffeine or chocolate. Suzuka has played out just like a soap opera with little stories that unfold, but more important are the characters and the relationships that develop. And just like a soap opera, you want to see what happens next. But it's not a soap opera, it's a finite length anime show, and the creators have a limited story to tell. Once Suzuka and Yamato's on-off relationship is resolved, there's no point in continuing.

It is resolved in these final four episodes, and it's resolved in a way that left me satisfied, justifying my investment in the series and its characters. Of course I'm not going to tell you exactly how it turns out, but I certainly wasn't disappointed in any way. Well, maybe a slight disappointment. I've been burning a candle for Yasanobu and Miki, the meddler and the lecher have been a bright spot of every episode offering comic relief, and in their good natured bickering they have seemed supremely suited to each other. It would have been nice to see them get together, but I suppose at this stage it would have only been a distraction from the main story. I've a great idea for a spin-off though…

There's a majority opinion on the Internet, one that I don't subscribe to, that slates this series, citing that the titular character Suzuka is a bitch. I'd disagree with that crass assessment, although I can see where that opinion comes from. Anime as a medium rarely does subtlety of emotion, nuance or subtext. By its very nature, everything has to be overt, grand, and melodramatic, especially the characters. It harks back to theatrical and operatic influences, and is usually evinced by graphical short cuts to emotion such as sweat drops, and super-deformed characters, as well as extreme reactions. Characters are invariably stereotyped, and teen romance in particular usually follows quite rigid guidelines. You have your hapless teen male, you have your meek attentive girl, who cooks a grand meal and then watches as the object of her interest eats it, or you have your tsundere girl, who can punch the male interest into next week, giving him an emotional and physical pummelling, but will melt at the slightest hint of affection into a gooey ball of love. It's all very entertaining, and it's all utterly stylised and unreal.

Along comes Suzuka, an anime quite naturally, with a teen romance, light drama with overtones of comedy, set against a sport background, and the main characters don't conform to stereotypes. Yamato certainly isn't hapless, he's confident if inexperienced, and has enough ambition to know what he wants and to go after it. Suzuka is a single-minded athlete, who all of a sudden finds an admirer in her life, something she wasn't expecting. She has issues with her past, and while being with Yamato is fun, those issues keep coming up and confusing the matter. It's all about communicating; something that teenagers are notoriously bad at, and for both of them, getting their feelings across is difficult. At the same time they keep trying to figure out what the other is feeling, a problem compounded by the fact that most times they don't even know how they feel. It's why Yamato appears to waver and be wishy-washy at times, and it's why Suzuka runs alternately hot and cold. In other words, it's stumbling, faltering first love. And given the constraints of the medium, and the context of the show, it's probably as genuine a depiction of teen romance as you're going to get in anime.

I found Suzuka to be entertaining, heart-warming and sweet. It's gentle character drama that comes from the Neighbours school of soap opera. It eschews excess drama, the comedy is always in keeping with the tone of the show, and if you let it, it will make you care about its characters and root for them to succeed. I have no regrets in following this show, and the best thing that could happen is for the final two volumes to come out in the UK, sooner rather than later.