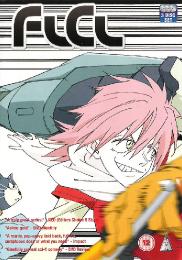 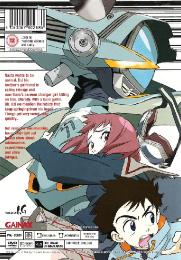 FLCL, also known as Furi Kuri or Fooly Cooly is a 6 episode anime from Kazuya Tsurumaki, who freely admits that he doesn't know what FLCL stands for.

The series follows a twelve-year-old boy, Naota Nandaba, who lives with his father and grandfather in Mabase, a fictional suburb dominated by the Medical Mechanica plant. An ordinary schoolboy, Naota's life is changed when a girl on a Vespa runs him over and wacks him round the head with her bass guitar; this impact awakens an extra terrestrial in his head that seems to become more active when he is most stressed. The girl, Haruko, gets a job as a maid at Naota's house, much to his dismay, but seems to be acting as his guardian against a special agent of the Bureau of Interstellar Immigration, Amarao, a man notable for his bizarre and fake eyebrows.

Trying to explain exactly what happens over the course of the series is nigh on impossible as it makes something like Eraserhead seem straightforward - at the end of the first episode, I thought to myself "what the hell is going on" and hoped that, by the end, it would make sense. It didn't. 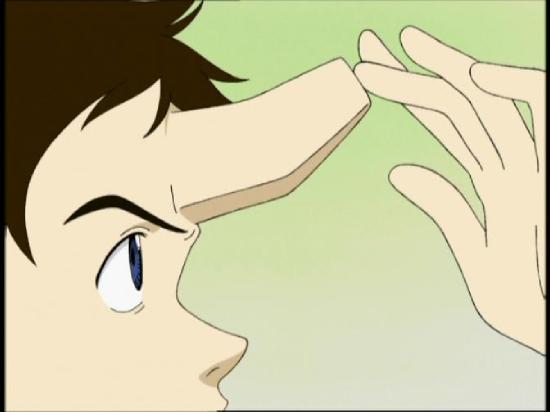 1: Fooly Cooly - A girl from outer space?!
Naota has enough to deal with at home. His older brother went to the US to play baseball. And his father and grandfather never behave like normal adults. Not to mention his brother's girlfriend is now making advances on him. Plus there's a so-called alien girl hitting on him. Literally. With a bass guitar. Oh, did we mention the robots that keep springing from his head?

2: Fire Starter - The god of the black flames.
Hanging out by the river and playing with cats, no one would suspect that Mamimi is a girl with a dark past. She's been obsessed with the videogame "Fire Starter". Coincidentally, there's been a string of fires around town. Fires like the one that burned down the school 6 years ago, where Naota first met Mamimi. And if that's not enough, there's something growing inside Naota's head.

3: Marquis de Carabas - Yes, Miss Class President.
With a robot and alien at home, Naota tries to at least have a normal school life. The class is putting on "Puss 'n Boots" and Naota's playing the cat. And if that's not embarrassing enough, he's also sprouted cat ears. Meanwhile, class president Ninamori's been chosen to play the lead. And she's bossing Naota around, insisting he attends rehearsals. But behind the tough exterior, Ninamori's got her own troubles. Her father, the mayor, is involved in a scandal, and her parents might be getting a divorce...And of course there's got to be another robot! 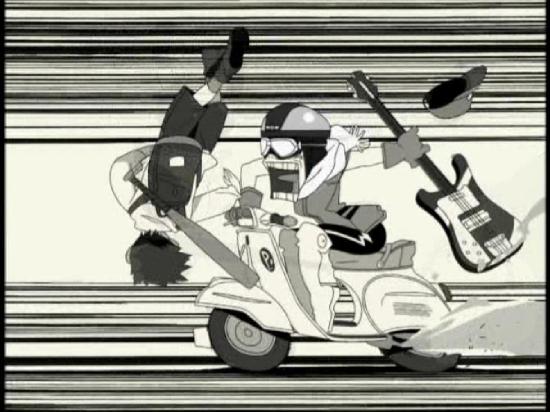 4: Full Swing - Naota steps up to the plate.
Though he's always carried around his brother's bat, Naota's never hit anything. Well, now that his brother's gone, it's Naota's turn to prove his worth. But the local baseball team doesn't seem to be doing so well. And what is Haruko doing playing for the other side? Dad's been acting very strange lately, as well. It all ends in a breakdown. But not before an unidentified flying object comes to town. The invading aliens have arrived. Looks like Naota's really gonna have to hit this one out of the park...and the town.

5: Brittle Bullet - Lock, stock and a whole mess of smoking barrels!
Mabase's safe for now, but there's a new kind of danger. Naota finds himself in the midst of a survival game, with Haruko on his team. With weapons blazing, it looks like Kitsurubami has joined the fray. And Amarao is getting his hair dyed? He's freshening up in anticipation to meet some girl from his past. So what exactly is his relationship to Haruko? Get out those guns, because not everyone will be left standing.

6: FLCLimax - The end is here.
The end is near and both Haruko and Canti are at large. Now, Medical Mechanica is preparing to move. Before Amarao can do anything to stop it, he needs to find the terminal core. Meanwhile, a Takkun-less Mamimi has found a new friend with an appetite for the mechanical. Before it's all over, Naota and Canti are in for the battle of their lives. And then, there's Atmosk. What a climax! 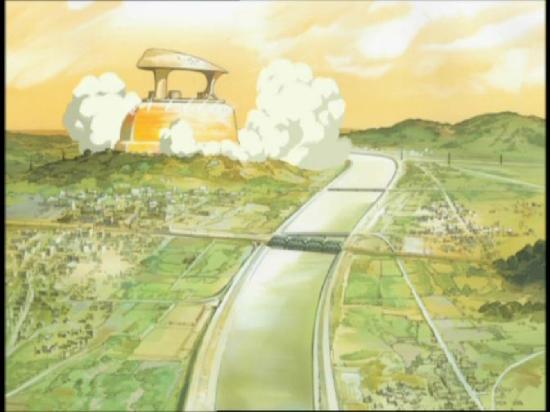 FLCL is a visually stunning show, with varying styles of animation throughout - at several points it becomes a manga comic but then goes back to anime and you can see people carrying the manga storyboards out the door. In episode 5 the animation is styled on South Park for a while!

There was obviously plenty of effort put into the design, not only of the characters, but of the robots and town, dominated by the iron-like Medical Mechanica factory which, by the end, is accompanied by a massive hand (not dissimilar to Monty Python's giant foot but a scan of Kazuya Tsurumaki's right hand).

The animators' work has been rewarded by a quite beautiful picture with no signs of it being a NTSC-PAL transfer - if I didn't know better I'd assume it was straight-to-PAL. The edges are sharp and the colours bright and vibrant. 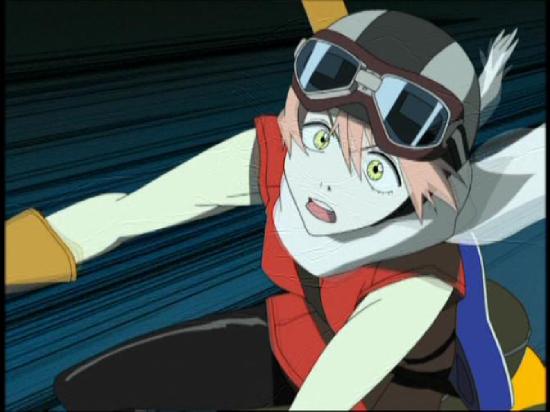 You have the option of Japanese or English stereo, the latter is the default, and both are very good but the English just feels wrong - some anime shows and films can get away with an English dub, films can have excellent ones - but this is just a very Japanese show so really should be heard in its native tongue. There is a suitably punk-infused soundtrack with a theme by The Pillows that sounds a little like The Manic Street Preachers!

The English subtitles (not dubtitles) are easy to follow though at times they can be very fast as the dialogue moves at a pace. Any Japanese text on screen is subtitled no matter which language you choose.

As an added bonus, and accessible only by using your remote, all three discs have a fourth audio track: a music and effects only track so you can appreciate the sound design and enjoy The Pillows' pop-punk soundtrack without any interruptions. 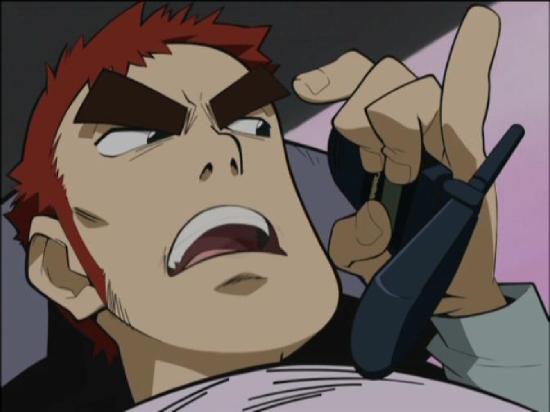 There is plenty on each disc, though not much of substance, but every episode has a commentary with Kazuya Tsurumaki, subtitled in English. These commentaries are interesting, though occasionally gappy, and provide information about the citations and animation styles. There are attempts to explain what is going on, but mostly he chuckles along with what's happening on screen. 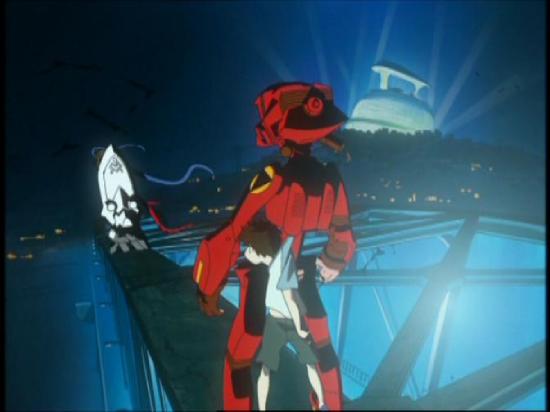 FLCL is a crazy and very odd series, summed up very well by the back of the box when it says "Things get very weird very quickly" in "this shocking, funny and right out freaky show". It is the sort of thing you can watch several times and still not fully understand but that's part of its charm.

Though I never grasped what was happening, I'd be lying if I said I didn't enjoy FLCL - the outrageous humour and various animation styles, coupled with knowing references to other anime series which I didn't get but were pointed out in the commentary; any hardcore anime fan would no doubt pick them up. Just on a visual level, FLCL is a joy to watch, but throw in some quirky humour, alien robots, a government agent with no eyebrows and a story about adolescence and you've got a rich and fascinating series.

If you want something out of the ordinary that you can sit back and laugh at without having to worry about whether it makes sense or whether you're stupid for not getting it, FLCL is for you and this 3-disc set (which comes in a single amaray case) containing all six episodes and a selection of extras is excellent. That said, it's probably one that an anime fan will appreciate more than a casual watcher but, as someone who rarely watches anime, I loved it. It certainly deserves a place on any self respecting anime fans' shelf and even a blind buy for those who don't normally invest in Japanese animation would be rewarded.

There aren't many review discs that I'll watch to write about and then be in a hurry to rewatch - this is one, putting it in esteemed company.