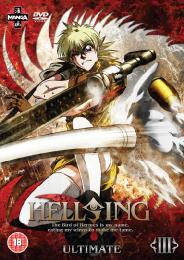 It's with a sinking feeling that I began watching this disc, although certainly not because of the content, or the quality of the release. It's just that with this third volume, we've passed the halfway mark in the English Language Hellsing Ultimate licence. There's just volume 4 to go, and then it's a lengthy wait for someone to licence volume 5, and then there is the wait for the Japanese producers to make and release volume 6… With 10 volumes of manga supposedly being adapted into 10 OVA episodes, I could be drawing a pension by the time the story is completed. It only hurts because the show is so damned good.

Vampires exist, as do the legions of the undead, and the Hellsing organisation has been tasked with guarding the British Empire from their onslaught. The current head of the organisation is Sir Integra Hellsing, who inherited the position from her father. The ace card she holds is Alucard, a renegade vampire who fights for humanity against his own kind. If only vampires were the only problem they had. Britain is a Protestant nation, and Hellsing works for the Church of England, something that rubs the Vatican the wrong way, who have their own Iscariot organisation to battle the undead. The ideological differences between the two groups have them locking horns on more than one occasion, and while they are distracted, the vampires can feed. But while political infighting has been keeping the two rival groups distracted, a sinister power from the past has been reborn, and now the master race is calling the shots. 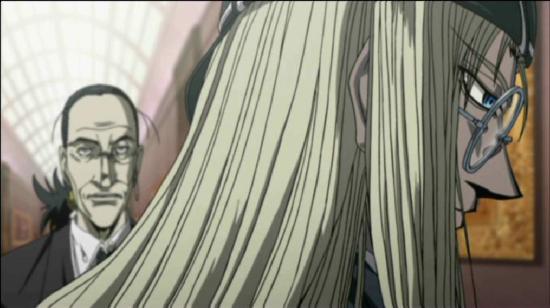 The previous volume saw the Hellsing organisation attacked by the Valentine brothers. However, more worrying if possible than the attack on their lives, was the reason behind the attack, as well as the change in the way the vampire siblings and their minions were operating. At the end of the last episode, the only clue that Sir Integra had was the single word Millennium…

As we begin the third volume, Hellsing are trying to rebuild their forces, after so many of their men were massacred in the mansion attack. Walter suggests the use of mercenaries, and he has the perfect group in mind, The Wild Geese, led by a man named Bernadotte. The professional soldiers aren't too nonplussed by an assignment in London of all places, but the revelation of the existence of vampires comes as a shock. Meanwhile Sir Integra is summoned to the Royal Museum for a meeting with the rival Iscariot organisation. Leader Enrico Maxwell himself is attending, and has several choice insults to voice, before getting down to the nitty-gritty of exchanging information. The reason behind the Vatican's sudden lack of murderous intent becomes clear when he reveals the truth behind Millennium, one of the Vatican's darker secrets. At the end of the Second World War, the Vatican assisted the flight of Nazis to South America, even while Germany crumbled. Now the Nazis are back, their investigations into the occult and undead have continued, and they now have a legion of ghouls and general undying nasties at their beck and call, and they're getting around to the global domination that was so rudely interrupted. Alucard's next mission is to head to South America, to search and destroy. With him travel Seras Victoria and Bernadotte. But no one can be trusted, certainly not the Vatican, and the first thing they encounter when arriving in Rio is betrayal. Has Alucard finally met his match? 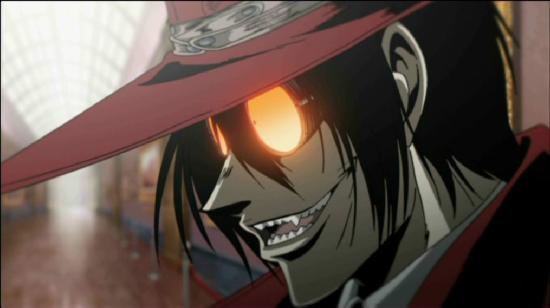 Hellsing Ultimate gets a 1.78:1 anamorphic transfer, and it's a good one. The image is clear throughout, there's no signs of artefacts except around excessively noisy moments, NTSC-PAL conversion issues are practically invisible, and this is as good as anime transfers usually get. What usually causes trouble for anime transfers are misty or dark scenes, or a combination of the two, usually showing up in horrific colour banding. Hellsing is about vampires, it's all mist and darkness, but there are no such issues here, and the animation comes across brilliantly. 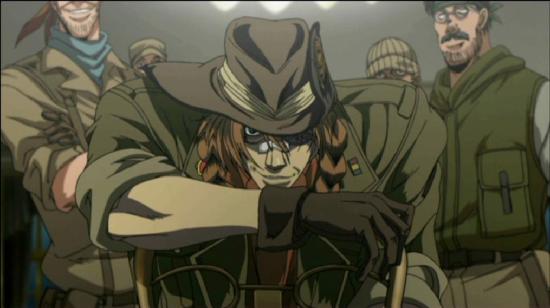 It deserves a good transfer too, as the character designs are excellent, the animation is vibrant and expressive, it's given the full OVA budget treatment so expect something a cut or two above the tight schedules and corner cutting of television animation. What you get here is moody, utterly stylish, and deliciously dark. Effective use of light and shade do much to establish the genre feel of the show, and broad distinctive outlines give it a unique character. And there is plenty of blood, gallons of it, arterial sprays all over the place.

You have a choice of DD 5.1 English and Japanese, but the DTS track has been dropped for this volume. There are optional English subtitles provided, but once again Manga Entertainment omit the separate signs track. Of late, Manga's releases have been nigh on perfect, it's just that one final quibble that remains. The sound is awesome. This is an action packed show; with an excellent orchestral score from the Warsaw Philharmonic Orchestra, and the surround does it full justice. It's a vibrant, immersive track with excellent directionality for effects, dialogue and ambience. Unlike a lot of television anime that start off with stereo and then get glorified upconversions, this is a show that was sound designed right from the beginning. And yes, I still loathe the English dub. 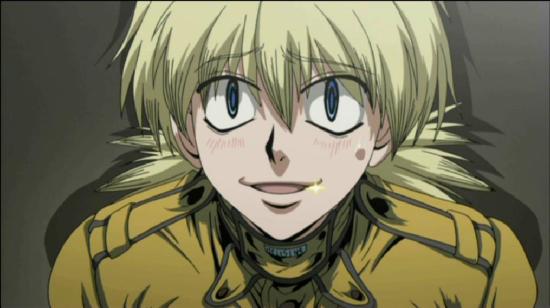 If you can't live without DTS, then you will have to import from Region 1, but bear in mind that only the Special Edition of volume 3 has the DTS in the States, the regular edition does not.

We begin with a half-hour interview conducted by English Voice Director Taliesin Jaffe, who is joined by voice of Enrico Maxwell, J B Blanc, and Victoria Harwood, voice of Integra Hellsing. They begin by talking about the original series, and how they got their respective starts on the show and in the business, and in the early part of the interview there is a good deal of crossover with the commentary, but as the half hour progresses, they begin to talk about acting as a career, and it becomes an utterly engrossing chat. They also talk about their reactions to anime fans, and there are some anecdotes worth keeping an ear out for. It's well worth the inclusion on the disc, and stay for the credits.

Anime Expo 2007 Cast Panel lasts 42 minutes, and sees Taliesin Jaffe, producer Jonathan Klein, Josh Phillips (Jan Valentine), Patrick Seitz (Luke Valentine), Ralph Lister (Walter), and Crispin Freeman (Alucard), face a room full of baying fans, in full cosplay mode. This was around the time of volume 2's release in the States, so there aren't any spoilers here, and it's all very entertaining stuff, as they face a Q & A session with tongues firmly in cheek. And yes, there are fans that want to know how to be a voice actor. 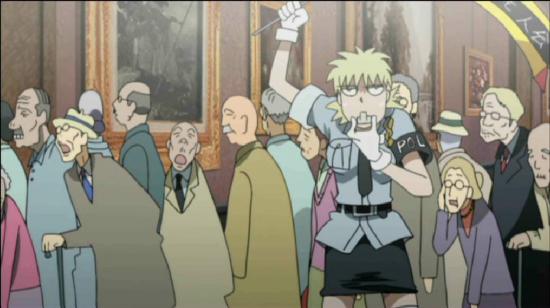 There is the third textless credits sequence.

The Production Galleries offer a 1-minute slideshow of character concepts.

It concludes with the commentary, which as you would expect is with Taliesin Jaffe, Victoria Harwood and JB Blanc. They talk about the original series, as well as their individual careers, and offer some commentary on the action as the show progresses. But it's a frivolous chat, if enjoyable to listen to. 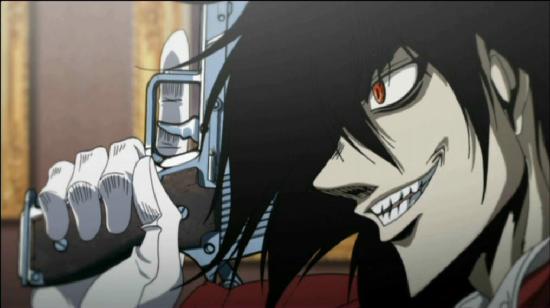 We're into uncharted anime territory now, as the third volume stays faithful to the manga, whereas at this point, the original thirteen episode series had to diverge, as the manga hadn't been written at that point. If anything, Hellsing Ultimate is getting better and better as it goes along, and this third volume offers more atmospheric visuals, more amazing characters, more blood and gore, and more dark humour. It's a pure 50 minutes of unadulterated style and substance, and I wound up watching the show with a silly grin plastered on my face for the duration. The characters are grandiose, overblown and overplayed with relish; with a larger than life, operatic feel to the show, there's really no way that underplaying them would actually work. The visuals are lush, rich and enveloping, the score suitably orchestral, and when the action starts and the blood starts gushing in bucketloads, it becomes clear that Hellsing Ultimate is a rich fruitcake of an anime. It's jam-packed with cholesterol raising goodness, absolutely delicious, and your taste buds scream out for more, but your cardiovascular system is grateful that it only comes in small portions once every few months. Hellsing is a gorgeous anime, but if all anime were like this, I think I'd start bleeding from the eyes. 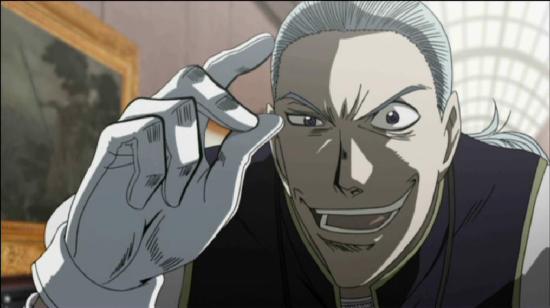 I rounded off my previous volume review anticipating Nazis. Alas, the Nazis seemed reticent to come out and play in this third volume, preferring to stay in the background and manipulate events from afar, weighing up the strengths and weaknesses of their foes. In this volume, Alucard, Seras and Bernadotte are sent to South America on a Nazi hunt, although Alucard is no Wiesenthal. A couple of events in this volume do appear to be throwaway moments at this point, although they will probably have an impact in subsequent volumes. Early on, the Wild Geese (Bernadotte's group of mercenaries) are employed by Hellsing to replace the men lost in the previous volume. While we get an intro that shows up the mercenaries' talents, and we see them come face to face with their first vampire (the demure Seras in a hilarious encounter), that's it for them, and thereafter we only see their Captain. Also, Integra's meeting with Enrico Maxwell, as well as Alexander Anderson's almost rematch with Alucard, speak to something momentous and portentous, but it's really just used to introduce the Enrico character, and give us the necessary bit of exposition required to send our vampiric antihero south of the equator. It goes without saying that we'll see more of Maxwell. 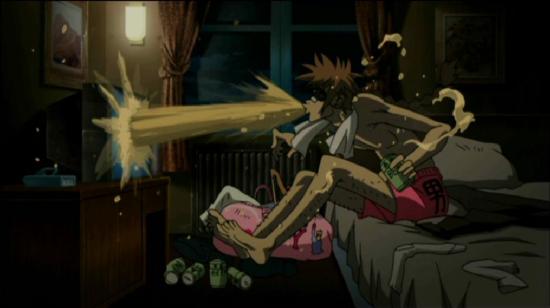 The blood only starts flowing when Alucard and the others get to South America and walk straight into a trap. The currently clandestine Major, to get the measure of his foes, has rigged it. He's also sent Tubelcain Alhambra, another supernatural presence that decapitates his foes with a deck of playing cards; to face Alucard once a SWAT team has softened him up. For the first time it looks like Alucard has met a worthy opponent when Tubelcain puts up a fight and refuses to die so easily. 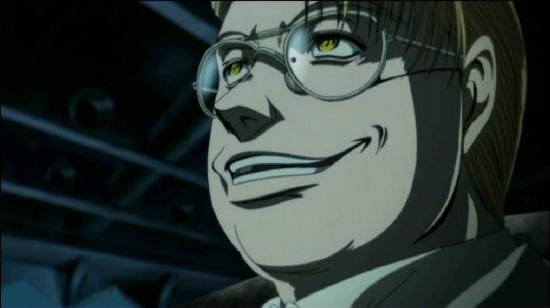 The visuals may be stupendous, and the spooky atmosphere and uber-violence does have its charms, but what I like most about Hellsing is its dry humour, occasional surreal asides, and utter sense of fun to proceedings. As usual it's Seras who provides the lightness to the series, including a hilarious moment where she defuses a tense situation with deft use of some Japanese tourists. She's still also the human face of the show, despite her vampiric nature, and once again she's confronted with an unpleasant truth when Alucard turns his unholy attentions to dealing with human foes, and dishes out the same brutality he uses on the undead. Seras was still under the impression that Hellsing were the good guys, and the good guys only attacked ghouls and things that go bump in the night. 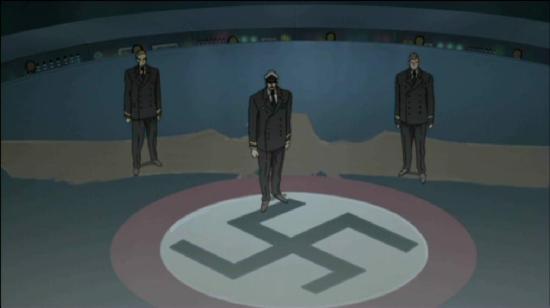 Despite the understated presence of the Nazis this time around, I still find it hard to pick flaws with this show. It's just so entertaining. If you appreciate all things gory then this is an anime you can't do without. And judging by the preview for episode four, there should be plenty of Nazis in the next volume, goose-stepping hordes of them. If there aren't, then I'm going to have to word a stern letter to my MP.