Meet the Mobsters
Not available 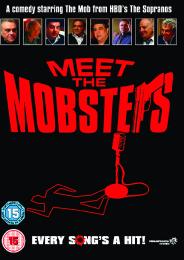 Synopsis:
Johnny Slade (John Fiore) is a struggling lounge singer, down on his luck and ready to give it all up and go back to his regular blue-collar day job. That is until his long-suffering agent Jerry (Richard Portnow) gets a call offering Johnny an exclusive residency at a hot new club. The only catch is, he's given a new - and lyrically nonsensical - song to sing each night, all written by his mysterious benefactor, Mr. Samantha (Vincent Curatola). Unknown to Johnny, his latest musical collaborator is actually a former high-profile mob boss, now living in hiding and unable to communicate with his gang members who are all under Federal surveillance.

As his popularity begins to rise, Johnny notices a connection between the new songs and the local news headlines each following day. At first it all seems like a bizarre coincidence, but it soon becomes apparent to Johnny Slade that his most popular songs aren't the only "hits" being performed night after night! As the hits - of both kinds - keep coming, and the body count starts to rise as fast as his singing career, Johnny finds himself caught in the middle of a turf war between rival gangsters and the only thing keeping him alive is his voice.