Blu-ray
The Hitchhiker's Guide to the Galaxy
Related Articles 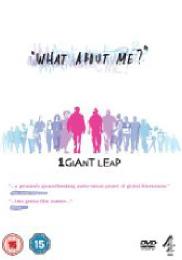 Synopsis:
One Giant Leap have created a unique music, TV and film project. What About Me? is the culmination of 4 years work visiting 50 global locations collecting wisdom and musical jewels.

It's an inspiring and alarming look at our collective insanity: how we are ego-driven, needy in relationships, insatiable in desire, addicted to status, wounded by childhood and unable to stop thinking, but how we still manage to be inspired and creative.

The backbone of the project is the music that One Giant Leap make. They start with pre-composed backing tracks in a laptop studio.

While Duncan & Jamie sought out wisdom from the likes of Noam Chomsky, Eckhart Tolle & Stephen Fry and the cream of the worlds thinkers, writers, and entertainers they also met many people just getting on with their lives - gravediggers, taxi drivers, brain surgeon's, street kids. Unscripted, with no storyboard, these conversations all reveal how we are connected not only through our creativity and our beliefs but most of all through our madness! When Duncan & Jamie left on their global journey they thought they were in control but how could they predict what would happen