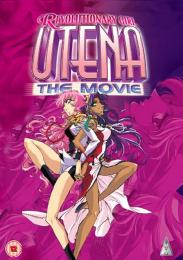 Making a movie of a successful anime series is a tricky prospect, fraught with pitfalls. The easiest thing to do would be to wait until the series has finished, then start on the film where the story left off, continuing the tale on the big screen. However with long running series that becomes even more difficult, especially when there is cash to be made from a timely feature transition. The ongoing series will still have character arcs and storylines to follow, which means that any feature will accomplish nothing in these areas, and will essentially be little more than 90 minutes of fan service. There may be flashy effects and big explosions, but the characters will get a reset at the end. The quick cash in would be to wait until the end of the series, then re-edit it and repackage it as a feature, adding little if anything new to the show. Yet with all these approaches, you can still get something entertaining and memorable. Stand Alone Complex, Full Metal Alchemist, Cowboy Bebop and Urusei Yatsura all spring to mind. You'd think that this would be the limit of the options, there's little more you can do to adapt a television series to the big screen, but then Revolutionary Girl Utena comes along with a wholly new approach. 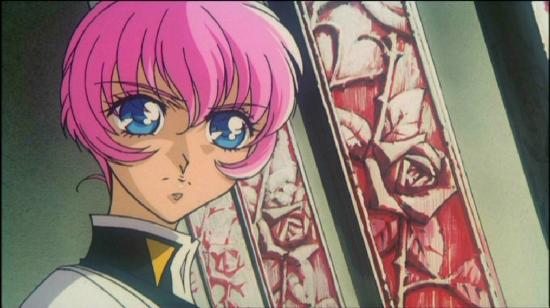 Revolutionary Girl Utena was a 39-episode series that debuted in 1997. It followed the tale of Utena Tenjou, a girl who was consoled by a prince following the death of her parents, and who gave her a ring with a rose crest on it. Vowing to be just like him, she began dressing in boys' clothes and attending the exclusive Ohtori Academy. The rose ring gave special privilege in the school, allowing the students to duel for their honour, and whoever was at the top of the duelling heap would 'own' the Rose Bride, student Anthy Himemiya. As Utena's fondness for Anthy grew, the secrets of Ohtori Academy were unveiled. But when it came to adapting the series for the big screen, director Kunihiko Ikuhara did something wholly unexpected, he kept the same characters, the same story, but set it in a different universe, starting from scratch. Those who had previously seen the series, were in for something completely different, as the animators could tell a different story, imagine a whole new world for the characters, and present something completely fresh. And boy, did they let their imaginations run wild! 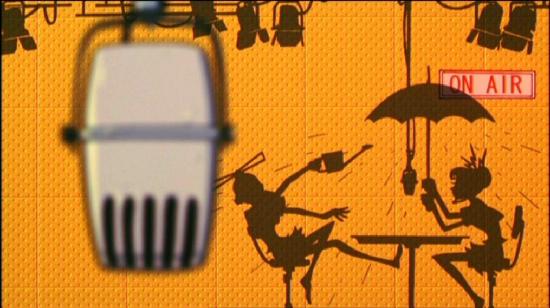 There is a whopping great diversion on this anime trip however, and it's the all too common fact that the Utena series was never released in the UK, and this film has taken its time to come here as well. Made in 1999, it was released in the US in 2001, hot on the heels of the series, and US fans got to do a compare and contrast. We in the UK get none of that though unless we import, and most of us will have to take this film at face value. 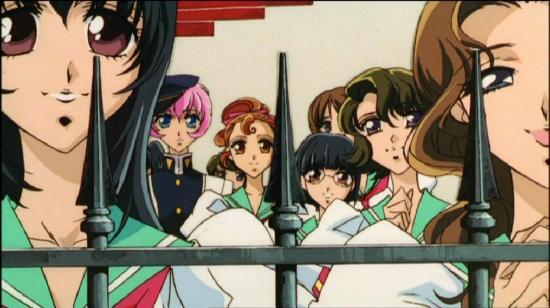 For a film that began its DVD life nearly eight years ago, Utena isn't looking too bad. Once you get past the NTSC-PAL conversion (which in this case really only shows up as interlacing when you press pause, as well as a slight softness), you may notice some minor compression artefacts around fast and complex motion. But the clarity of image, and consistency of the transfer are all such that you'll have no problems watching the film. The character designs took me a bit of getting used to, all slender and highly angular, with almost stereotypically large eyes and small mouths, but they are animated well. The proof of the pudding is in the world design. It's as if the story is set in a succession of vignettes of abstract art. Everything is highly stylised and evocative, from the floating rose garden to the radio announcers in silhouette. The school itself is a marvel of graphic design. We're introduced to the film with a room of an infinite number of blackboards, all in motion, and that carries through to the school architecture itself, which never stops rearranging itself. (Note to litigious Warner Bros. Next time you feel like whipping out your lawyers, think twice. No ideas are all that original, and someone may have done it before, and better.) Frankly Ohtori Academy makes Hogwarts look like a meccano set. 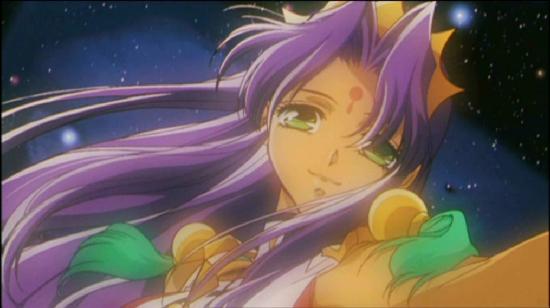 The start of the film, with bells tolling, architecture whooshing by really deserves a 5.1 soundtrack. Alas you'll have to make do with DD 2.0 Stereo, and enjoy what enhancements a little prologic can add. It isn't too bad though, and the film is certainly more immersive than most television series. You have a choice between English and Japanese, along with translated subtitles and signs. If you choose English and signs, then you'll also see the translations for the in film song lyrics, but with the Japanese and subtitles, you get the romanji lyrics instead. As for the English dub, it's pretty old school, and not the sort that I enjoy listening to, or hasten to recommend. Your mileage may vary though.

Utena gets the usual animated menus and jacket picture, although I did feel that the pink of the menu buttons, and the purple of the highlighted selection were a little too close in hue in terms of clarity. Utena does get a decent selection of extras for an anime disc, certainly out of the ordinary.

The feature commentary comes from director Kunihiko Ikuhara (subtitled of course), although it is a chore to listen to. He's not the most precise of speakers, there are a lot of ums and ahs, plenty of gaps, and a fair bit of technical stuff. There is something of interest though, in terms of the differences between the TV series and the movie, as well as the meaning behind some of the scenes. He is hesitant to go into too much detail though, leaving the viewer to form his or her own opinions. 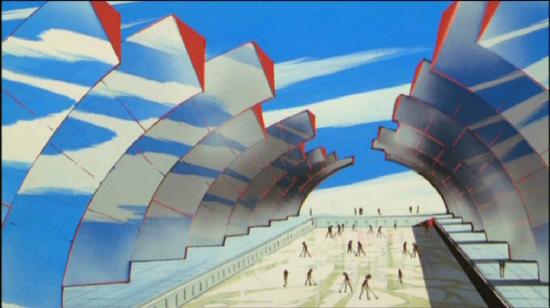 Behind The Scenes with Kunihiko Ikuhara lasts 13 minutes, and sees the director in New York in 2001 to oversee the Central Park Media dub. There's some behind the scenes footage of the ADR process, as well as comments from the ADR director and US voice actors.

The disc rounds off with the US trailer and teaser for the film, the Japanese trailer and TV spots, and finally MVM trailers for FLCL and Starship Operators. 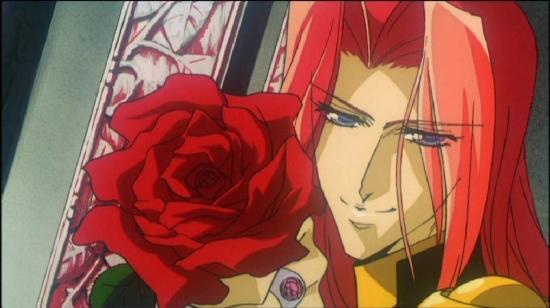 MVM are covering all the bases this year. We've had the shonen-ai (boy love) of Gravitation, so I guess it only makes sense that we have a little shojo-ai as well. But to Revolutionary Girl Utena's credit, it's a far more satisfying experience, with much more interesting characters, a better story, and more inventiveness in 90 minutes, than most series manage in runs of a hundred episodes. Of course when you see the screenwriter of FLCL, Yoji Enukido listed in the credits, you should expect the film to head off the beaten track somewhat. Utena is a surreal, unexpected delight of a film, its visual creativity and oddball imagination makes for an enthralling viewing experience, and in all likelihood you'll have never seen anything like this before. It's as if the director, after 39 episodes of constraint on the television series, where he had to work within network guidelines and limits, was finally given the freedom and budget to create, and the result is all that pent-up imagination let loose in the anime equivalent of a mushroom cloud. 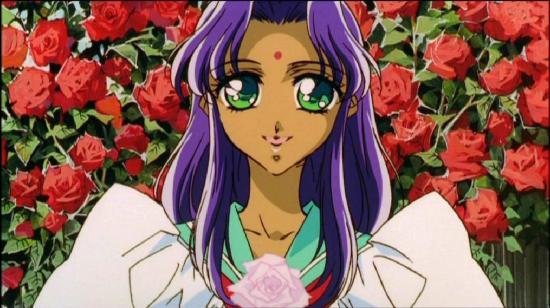 The problem is this. The fact that we haven't seen the Utena series in the UK means that we have to accept this film as a stand alone feature, but I get the feeling that it was made as a sort of valentine to the fans, a skewed perspective on a familiar story, and as such can really be best appreciated with knowledge of the television series in place. Also there are moments in the film, character cameos that apparently have no context. Whether they are meant to be narrative non-sequitors, or actually rely on prior knowledge is naturally unclear, but I get the feeling that without the series, the film is a tad incomplete. 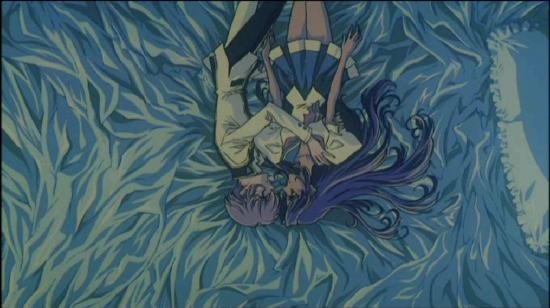 Everyone is reluctant to talk about the film, the director chooses not to go into detail about it in his commentary, the PR blurb also restricts itself from going into the plot, and quite predictably, I'm going to do the same. The Utena movie is allegory and symbolism entwined. The stylised setting aside, the story and events, the roles that various characters play is all open to interpretation, and it's one of those rare anime features that is pretty much all subtext. Make of it what you will, but it's likely that everyone will draw their own conclusions, and not all of them will agree. For me, the overwhelming themes were of grief and loss, and overcoming those feelings and moving forward. You may see something else in the film. From what I've read about the series, it's a pretty straightforward high school action romance show. The ambition of the film adaptation is astounding. It's as if someone took Eastenders, and turned it into a mediaeval fantasy rock opera. It's that much a departure. The central theme and the story may be similar, but the expression and exploration of that and the characters is completely different. At least I hope it is. Radical it may be, but if this film were stretched over 39 episodes, I'd think it would cause nosebleeds. 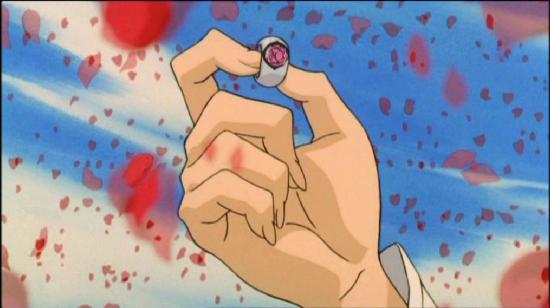 I'm a tad ambivalent about Revolutionary Girl Utena: The Movie. I get the feeling that it really would be better appreciated with the series rather than without, also the surreal imagery may not be to all tastes. It's an abstract art of an anime, that requires thought and input from the viewer to be truly appreciated. But putting all my wishy-washy indecisiveness to one side, I can't get past the fact that as soon as the end credits rolled, I watched the film through again straight away. Now it's been donkey's years since a film has elicited that response in me, and that more than anything else is the best recommendation I can give it.