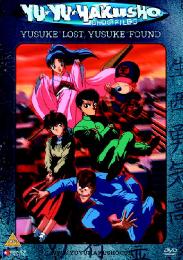 I've finished so I'll start. When the whole anime on DVD explosion happened a few years ago, one of the first series that I encountered was Yu Yu Hakusho, and as so often happens with new things, it was something of a faltering start, in pretty much every respect. The UK wasn't the place for long running anime series; in some respects it still isn't, with only Manga Entertainment able to buck the trend with any assurance. MVM was taking a chance on this 112 episode series, and an even bigger chance in releasing it in the same format as in the US, with 3-episode discs alternating with the occasional 4-episode offering. The tournament genre doesn't take well to that, especially with some fights lasting a stretch of 5 episodes or more. Fans aren't keen on spending 20 pounds for 70 minutes of anime, in which essentially nothing happens. It's something MVM learned in 2005 as they released the first four volumes, followed by a year's wait for volume 5. Volume 6 was pencilled in for the winter of 2006, which is when MVM lost the distribution rights to their Funimation properties, and in the transfer of all things Funimation to Revelation Films, Yu Yu Hakusho was conveniently forgotten. Jumping on the anime bandwagon also means jumping on in the middle of the parade. I missed some of the earliest DVD series out completely, while others I joined in the middle of the run. The first YYH review disc I received was volume 2, and I went onwards from there. But it's annoying to leave something unfinished, and when you see a disc on sale for £1.99, it's easy to scratch that itch. Just don't be expecting me to import the other 20 odd discs from the US!

So, at last… Yu Yu Hakusho: Volume 1. Yusuke Urameshi is your average juvenile delinquent, making his way reluctantly through school, ruling the roost when it comes to who is top dog, although that means regularly facing off against his rival Kazuma Kuwabara. That all changes when he dies saving a toddler from being run down by a car. Death is only the beginning of his problems, as spirits soon appear to tell him that it isn't yet his time. He has a chance to return to his corporeal existence if he completes a quest, and that will only be the start of a whole new life. Yu Yu Hakusho: Ghost Files begins with four episodes. The translated Japanese titles are followed by the English language version titles. 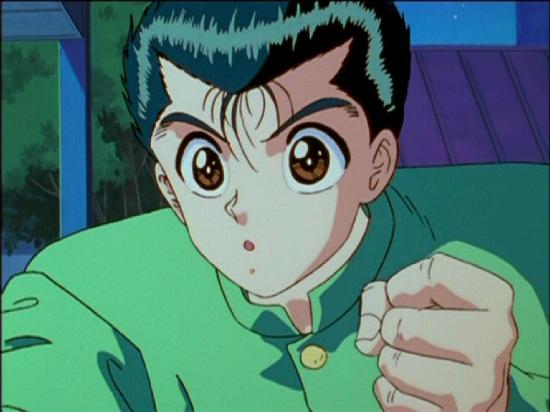 Ep 1. Surprised To Be Dead - Surprised To Be Dead
Life as a ghost doesn't appear to be too bad for Yusuke Urameshi, it's quite relaxing, despite the shock of seeing his body being wheeled away in an ambulance from a car accident. Having saved a young boy's life, he can feel quite satisfied with himself. It's a fair end to a typical day of delinquency, dealing with an alcoholic mother, wandering into school for the first time in 10 days, having a rooftop moment with his girlfriend Keiko, that typically ends in a slap, going toe to toe with the faculty before skipping the rest of the day, and getting into another rumble with rival Kuwabara. He's gone out on a high note, and it's not as if anyone will miss him. Then a cute girl on an oar comes floating down from the Spirit Realm. She's Botan, the guide across the river of the dead, but she has good news for Yusuke. It wasn't yet his time, and he has a chance to return to life. She's confused when he isn't all that eager. So she gives him a Wonderful Life moment, and takes him to his own wake.

Ep 2. Koenma of the Spirit Realm! A Trial Towards Resurrection - Koenma Appears
Botan takes Yusuke to the Spirit Realm to meet the head honcho, Koenma. He's a little surprised to meet a toddler, but this is a 700-year-old toddler who's standing in for his father. Koenma tells Yusuke that he has to face a trial before he can come back to life. It seems simple enough, keep a spirit egg until it incubates, and hope that it doesn't hatch a demon that devours his spirit… But Yusuke has a more immediate problem, stopping his body from being incinerated at his funeral in the next two days. 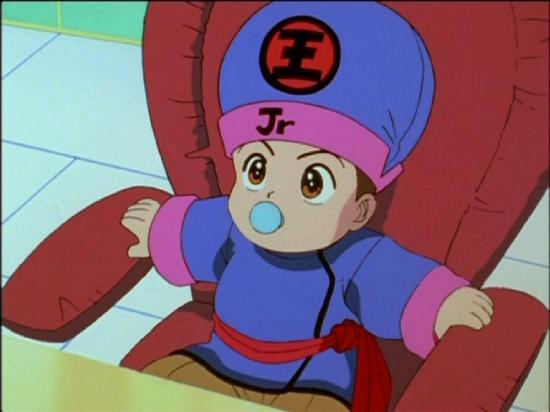 Ep 3. Kuwabara in a Corner! A Man's Oath - Kuwabara: A Promise Between Men
To get the spirit egg to incubate favourably, Yusuke has to show his better nature, commit good deeds. It's hard to do when you're dead. Fortunately an opportunity crops up when his rival Kuwabara gets into a fix. The scheming teachers, happy enough to have gotten rid of Yusuke, now aim to rid themselves of the other delinquent in the school, and when he gets into one too many fights, they punish Kuwabara with a challenge. Unless he refrains from fighting for a whole week, and gets 50 marks in a science test (his previous best is seven), then he and his gang will suffer. It's time for Yusuke to give him some spiritual guidance.

Ep 4. Hot Flames! Ties Of The Beloved - Requirements For Lovers
Yusuke is still having trouble with the good deeds, so Koenma sends down an investigator to give him a spiritual audit, to see if he truly deserves to return to life. But there may not be a life to return to. There is an arsonist loose about town, and Yusuke's soulless body is in danger when his flat is targeted. Keiko risks everything to save him, but to save Keiko, Yusuke will have to give up that which he desires the most. 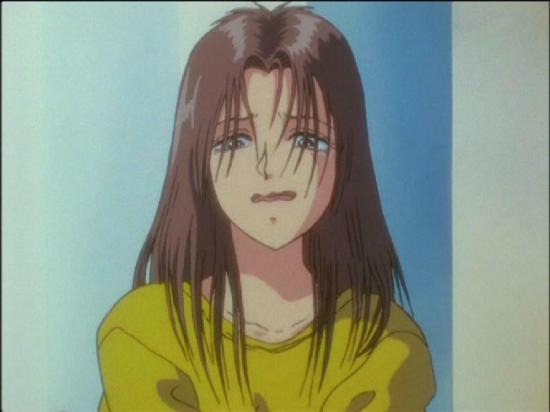 Yu Yu Hakusho gets a 4:3 regular transfer, as per the original television broadcasts, coded for regions 2 and 4. It's a clear unproblematic transfer, but the animation is certainly showing its age. Made before the advent of CGI, when the characters would be hand drawn, there is a more rough and ready feel to the animation, and the colours lack the vivid strength that recent shows exhibit. The animation is smooth and serves the story well, but is hardly exceptional. 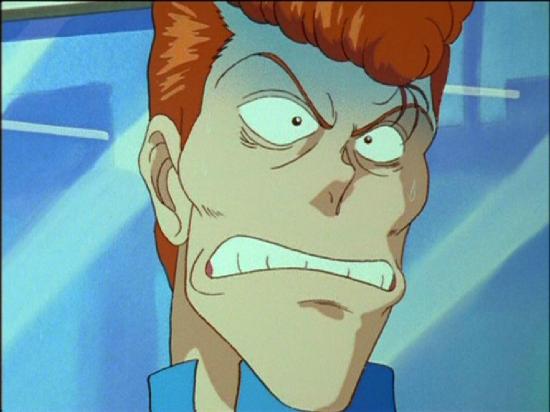 For sound you get a choice of DD 2.0 Japanese and English, and both soundtracks serve their purpose. The dialogue is clear, and as usual I listened to the original language track for preference. I sampled the dub and it's one of the old school dubs, with ill fitting character voices and excruciating dialogue. You also have a choice of dubtitles or translated subtitles, although the disc auto selects them according to which soundtrack you choose.

There is a brief selection of extras to accompany the disc, including the jacket picture, and multi-angle credit sequences in Japanese and English.

There are text Character Profiles, and Name Translations, and you can look at the opening and closing sequences minus the credits.

It's a good thing that I saw this volume last. The combat tournament genre, no matter how it is dressed up, is hardly my favourite, and personally I found the failure of Yu Yu Hakusho to break the UK market no great loss. It takes a lot of character and ingenuity to balance the 'building up stats, and fighting ever more powerful opponents' routine. A show like Naruto can do it, actually break out of its genre. On the strength of the four volumes I saw, Yu Yu Hakusho wasn't even close. But it actually has a rousing beginning, with this first volume introducing the cast of interesting characters, and setting things off with a set of episodes that are fresh and exciting, certainly not indicative of the dull routine that was to come. If I had seen this volume first, then there would always have been that hope that the show could eventually live up to the promise of these four episodes, and a sense of missed opportunity when the plug was eventually pulled. 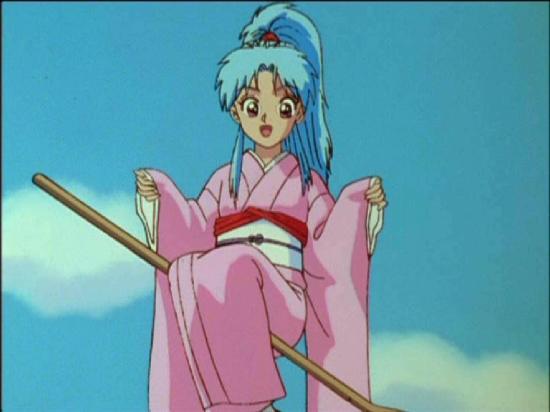 But there is no hint of the long running tournament shenanigans in these four episodes, and the story that we get here is succinct, fast paced, and above all interesting. This isn't the moment to set the scene, and all the babble about the spirit world and the demons needing to be defeated is a long way away. This is about introducing the main characters, and beginning to develop them. Yusuke is the hooligan with the heart of gold. He's had a rough upbringing, an only child in a single parent family, raised by an alcoholic mother. It goes some way to explaining why he faces the world head on and with fists raised. But he also has a sense of honour and is at heart a fairly decent and honest chap. He suffers provocation from those who challenge him, and snivelling and conniving teachers at school who think the school would be better off without him, but there are those who see the genuine goodness in him, including one teacher who is more of a mentor, as well as his girlfriend Keiko. After all, why would the smartest and most hard working girl in school associate with Yusuke, if there wasn't something more to him than just a short temper? 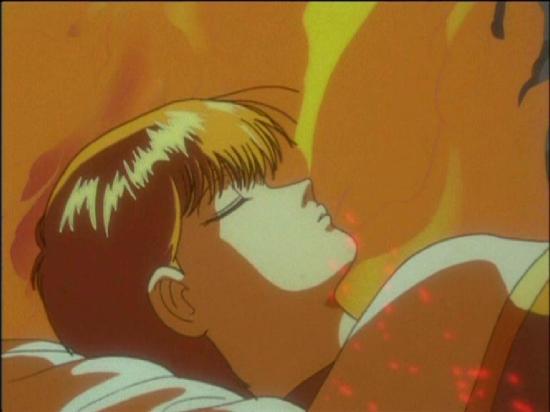 That becomes apparent when he sacrifices his life to save a toddler, when he really didn't need to. Now he's a spirit, looking to come back to life. He also has the opportunity to learn what people really think about him. It's a wakeup call when he learns how devastated his mother is, whom he previously considered a waste of space. He learns the depths of Keiko's love for him, and he also learns that constant nemesis Kuwabara is just as honourable and decent as he is. We also meet the main characters from the spirit realm, the playful imp that is Botan, and the incongruous toddler in chief, Koenma. There is a lot of fun to be had in these episodes, and that is mostly from seeing spirit Yusuke interacting with the real world. There is a hilarious moment where he possesses the unconscious body of a petite schoolgirl, and proceeds to beat the tar out of a group of thugs, leaving the girl to come to her senses surrounded by the twitching insensate bodies of a bunch of bullies, and a group of bystanders watching in shock and awe. There was a whole other series to be had in that premise… 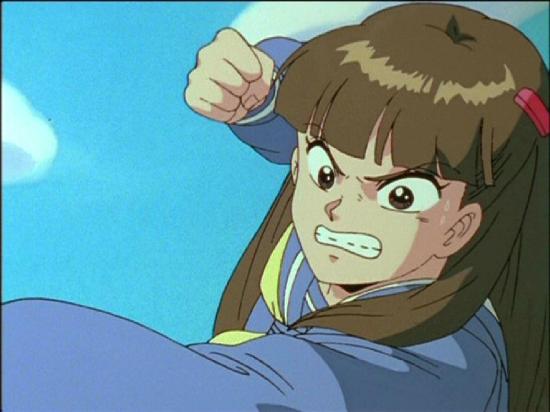 Unfortunately Yu Yu Hakusho wandered off into well-trodden shonen territory, and with it my interest waned. Still, these first four episodes are entertaining enough, and it's a pretty restful way to kill 90 minutes. At the price I paid, well, what do you have to lose?