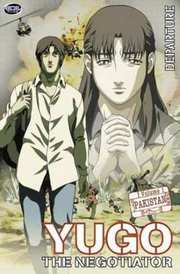 Despite Samuel L. Jackson bringing his inherent coolness to the film of the same name, the Negotiator doesn`t immediately strike me as the most telegenic of professions. When it comes to tight situations requiring bravery and resolve, it`s hard to think of a story that doesn`t involve someone with bulging biceps and an arsenal of weaponry. I doubt that you`ll be seeing ACAS: The Next Generation propping up TV schedules any time soon. Yet consider what a negotiator does, attempting to get peaceful resolutions in sticky situations, from people who have no qualms about using violence to further their ends. They willingly walk into incendiary circumstances, with nothing but words as their weapons, just to persuade people of violence to find another way. Bigger balls than Rambo indeed. Then take Pakistan, probably the most incendiary of situations in the world today, with a military dictatorship in power, militant radical groups looking to establish their own rule, and a battered desire for democracy from the populace. You`ll need one hell of a negotiator to pick through that mess. Yugo Beppu is that man, and Pakistan is his first port of call in the series Yugo The Negotiator.

It`s a thirteen episode series split in two halves, telling two stories. The final seven episodes will focus on Russia, but the first six are set in Pakistan. Yugo Beppu is the world`s finest private negotiator. He`s reputed to have never failed, and when a Japanese businessman is taken hostage in Pakistan, and the Pakistani government supported mediation violently collapses, Yugo is the only alternative left. The first three episodes are presented in Volume 1: Departure, with some interesting extra features.

1. Negotiator
Yugo Beppu receives a young woman visitor to his office, and by her drawn looks, and the main story being covered in the news, it`s obvious that it is Mayuko Iwase, daughter of a businessman kidnapped in Pakistan. The previous negotiator was murdered when it became clear to the kidnappers that he was the front man to a Pakistani Army force sent to root out the rebels. The official story is that they are dacoits, bandits, but the truth is that they are a militant group that violently opposes the government. For there to be a chance of peaceful resolution, the negotiator will have to be unconnected to the Pakistani government. Yugo will have to sneak in, and more importantly, be fully prepared for what he will face. He`ll be going up against Yusuf Ali Mesa, also known as Hell`s Hero.

2. Resolve
Yugo gets a rough reception from the Pakistani military, just for holding a picture of Yusuf Ali Mesa. It`s obvious that discretion will have to be his watchword. He got a lead before he left Japan, which points to a travel agency, where he meets a young man named Ahmad who takes him to Haji Rahmani. Ali beat Rahmani, humiliated and marked him as a coward when he took control in Sind. He`s reluctant to get involved, but he does point Yugo to a cryptic newspaper message, published after the last negotiation failed. It invites the next negotiator to come to the Kirthar mountain range, but specifies that the negotiator must be a hero. Will Yugo live up to Ali`s expectations? He sets off on the right foot when he rescues Laila, a mute dancing girl, from her abusive owner.

3. Contact
It`s a perilous journey for Yugo to the north of the Kirthar mountain range. First Laila insists on travelling with him, and then his radio transmission back to Japan is intercepted by the Pakistani military, sparking a search. The military presence gives his guide cold feet, who leaves them to fend for themselves in the desert, then seeking shelter they stumble into one of Yusuf Ali`s ammunition dumps. They are chanced upon by two of his dacoits, who see a fun time to be had with the dancing girl, just as soon as they dispose of Yugo. They are `saved` by one of Ali`s Lieutenants, who takes them to Ali. Only Ali can`t accept that someone not of the faith can be a hero, and sentences Yugo to death. 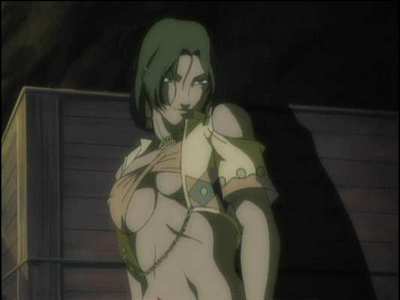 Yugo the Negotiator gets a 4:3 regular transfer that is clear and sharp, with no problems other than a minor shimmer on fine detail. It`s not the most dynamic of animations, preferring to stick with style over action. The characters have an animated cell-shaded sketch look that works well given the high exposed look of the show, and the palette that tends more towards the pastels. It`s very much in the Otogi Zoshi school of animation, and the character and thoughtful art design balances the occasionally static feel to proceedings. This is a show where attention to detail is overriding, and the fact that the art designer travelled to Pakistan to research the locations really tells in the final product. 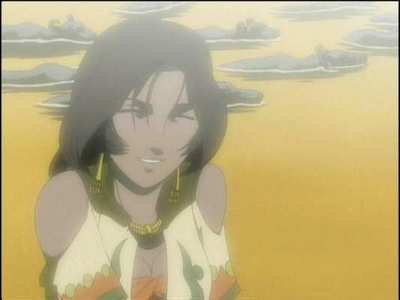 You get a choice between DD 5.1 English and DD 2.0 Japanese with optional translated subtitles or signs. Please, please avoid the English dub. I don`t know what it is about having a familiarity with an accent, but it makes it all the more obvious when they are mangled. The first Pakistani character on screen is a taxi driver that sounds like Apu from the Simpsons. It gets worse from there. It`s the subcontinent equivalent of Dick Van Dyke`s cockney, and it`s something I can`t live with. (I doubt I`ll have the same problem with the Russia arc though). It`s far better to stick with the Japanese track, and while everyone, regardless of origin speaks the same language, the cultural differences come through in the script and animation. It also means that the actors can concentrate on their acting, rather than keeping a wayward accent under control.

Another disappointment to Yugo is the music. Two credit themes that in no way suit the show are just a distraction, but the incidental music seems to have escaped from an eighties daytime soap melodrama. It doesn`t do the show any good at all. 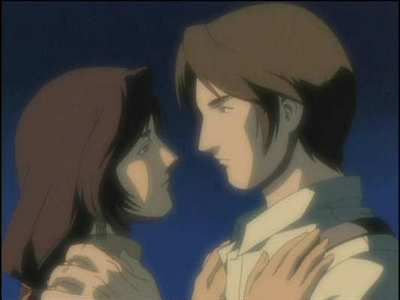 There are plenty of extras with this disc, beginning with the sleeve notes. The disc gets packaged in a clear Amaray case, and the inside is full of information, notes on the languages spoken in Pakistan, a glossary, an interview with creator Shinji Makari and a map of the area.

On the disc you`ll find the usual anime menu screens and jacket picture, and trailers for Area 88, Samurai Gun, Gilgamesh, Madlax and Cromartie High School. You`ll also find the clean credit sequences to the show, including all three of the end credits.

There are four featurettes here, 2-minute sound-bite interviews used in Japan to promote the show. You can choose from What Is Yugo The Negotiator? an Interview with Shinji Makari (story) and Shu Akana (art design), an Interview with Directors Seiji Kishi (Pakistan arc) and Shinya Hanai (Russia arc), and finally an interview with actor Takashi Hagino (voice of Yugo).

There are personnel dossiers, text page biographies for four of the characters.

There is a 28-minute commentary from ADR Director Scott McClennen, and Cultural Advisor Nawaz Charania. They talk about the Japanese depiction of Pakistan, how the animators and writers got the authenticity right, the culture of Pakistan, Islamic religion and belief, and the terminology used in the show. It`s interesting that they talk about the story and animation and not the dub. I would have liked to know why few Asian actors were cast for the Asian roles. This is more a featurette than a commentary, in that commentary specific scenes, edited from the first three episodes, accompany the voiceover.

Finally there is a preview for volume 2 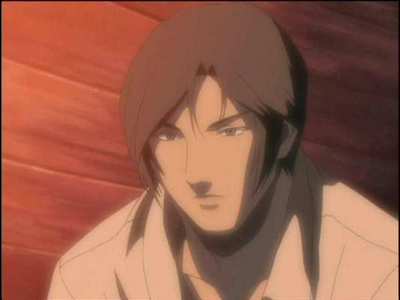 At this point in time, Yugo The Negotiator is a hard show to quantify. Even the most serial of anime episodes usually have a beginning, middle and end, some sort of narrative flow that helps you get a handle on which way the show is going, but Yugo`s Pakistan arc is very much one single story, and having watched just the first half, it`s really hard for me to gauge whether it`s worth sticking with without knowing how the final three episodes will pan out.

I will say this much, this first volume certainly grabbed my attention, and delivered an interesting and certainly very different anime experience from what I`m used to. Yugo The Negotiator is very much a more adult story with a mature measured outlook. We`re onto the serious side of things, with a very realistic approach to storytelling. Given that the author of the manga is writing from personal experience, and is coming from a non-fiction side of things, the attention to detail and sheer thoughtfulness of the story makes a pleasant change from the more fantastic or light anime series.

Yugo is an interesting character; he`s introduced as a sort of legendary negotiator, one who never fails, but he himself is far more self-deprecating. He`s also surprisingly methodical and rounded. The first episode pretty much depicts all the preparation and study that he does for his mission, and he doesn`t strike me as the typical anime character that succeeds through his inherent main character status, sheer luck and force of personality. Indeed the one time he tries to rely on wits and luck, he`s shown to be lethally mistaken. But, other than a reference to an early failure in his career, little is made of his motivation, and just why he throws himself into these deadly situations. Is he a thrill seeker? Is he motivated by a strong moral code? Is he in it for the money? In that respect he remains something of a cipher, and I hope it`s something that will be explored in subsequent volumes.

The big draw for me has to be the depiction of Pakistan. It`s always interesting to see how outside eyes reflect a culture, seeing what they get right, and what they get wrong. Pakistan is close enough to India for me to find a lot of what is shown here familiar, the hustle and bustle of crowds, the music, the popular culture, but this is all tinged with Islam, which lies at the heart of the nation. There is a surprising degree of accuracy in how the show depicts this, the call to prayer, the mosques, and how much a part of everyday life religion is. Where the show excels is in the examination of the political situation. The show is set in 1994, but made in 2004 it`s tinged with more recent sensibilities. A government wields the fist of the military with impunity against all dissent, while militant groups oppose them and are simply labelled as dacoits and bandits to be dealt with. The kidnapping that sparks this story is one of opportunity, and the implications in the show is that it is a regular occurrence for groups to take hostages, and raise revenue for their cause through ransom.

There are pros and cons to Yugo the Negotiator. The dub is horrible, at least when the Pakistani characters speak Japanese they don`t sound like they belong in a Bernard Manning joke. The music doesn`t help the show, and the animation does just enough and nothing more. But the attention to detail is astounding, the artwork and design can be sublime on occasions, the story offers maturity and realism, and most importantly, it`s unique in my experience. It all depends on whether the next volume can deliver on the promise of this first. Until then, a tentative thumbs up.