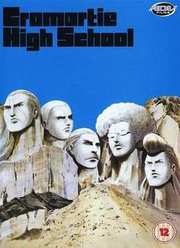 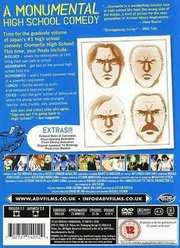 Time`s running out for Cromartie High School to work its magic on me. With just six episodes to go, I doubt that this one volume can redeem the series, a show that is funny but not quite funny enough. As I promised, I`ll stick with the show to the end, and given that the previous volume came closer to my funnybone than before, it`s still possible that with volume 4, it will go out on a high. Of course there is the distinct possibility that I just don`t get the joke…

Cromartie High School is a school for delinquents, and delinquents alone. There`s only the one character stereotype here, and they all compete to see who can be the most delinquent of them all. That`s except for Takahashi Kamiyama, a regular, hard-working student who finds himself in the wrong school. Now he must find his inner antisocial to fit in, although in a school full of hardcases, the wimpiest of them all earns some unexpected respect. Street thugs and brutes abound in this school, battling for supremacy against each other and all the other delinquent high schools in the area, among them a boy with an emotive purple Mohican, a luckless thug who gets no respect due to his lack of a nickname, a bruiser laid low by motion sickness, a robot, a massive gorilla, and Freddie Mercury… On a horse…

This final volume from ADV concludes with 6 episodes. 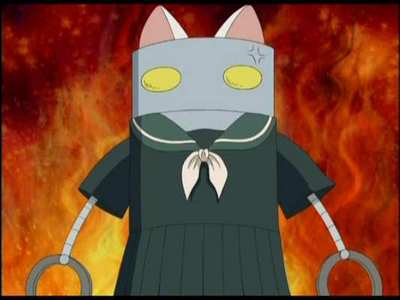 Cromartie High School gets a fair 4:3 regular transfer, which is free of significant artefacts, while remaining clear and sharp throughout. It`s a very stylised pencil sketch type anime, heavy on the character definition but not all that animated. It`s understandable given that it is a comedy more suited to wordplay and verbal gags. The approach of style over dynamism works just fine for Cromartie High School. 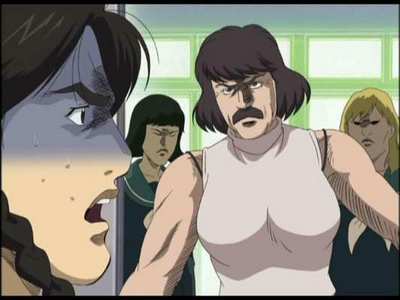 You get a choice between DD 5.1 English and DD 2.0 Japanese, with optional translated subtitles or signs. Given the amount of on screen captions that need translating, they`re practically obligatory on the English track, but the way they are implemented, overlaying the original text, is well done.

The running gag with the Japanese dialogue is that that in a school of delinquents, the losers all speak a formalised form of Japanese that is polite and clean to the point that the thugs exercise self-censorship when it comes to overly aggressive language. That`s lost in the English dub, which to be fair would sound a little too daft with a similar spin. That does mean that there is an extra, if minor level of profanity in the English track. While the surround does have a little extra presence, it isn`t all that big a leap from the stereo. Either way, as always Japanese remains my language of choice when it comes to anime. 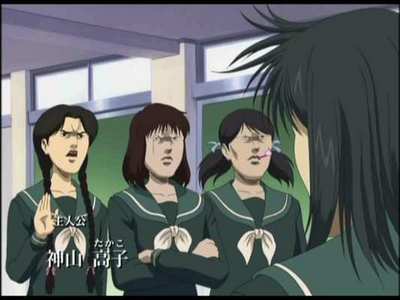 One final vinyl influenced cover that pays homage to a classic album. The vinyl influence extends to the disc`s label art. The main menus are displayed over a graffiti covered wall. It may be funny, but I can`t see how myself.

Inside the case you`ll find an eight-page booklet, offering interviews with the creators, character bios, behind the scenes notes, and more.

On the disc, the usual suspects apply as for most anime titles. You`ll find the clean credit sequences, comprising the opening and the three end credits, as well as the one-off end credit sequence for episode 23. There is an original Japanese TV warning, and trailers for Yugo the Negotiator, Gilgamesh, Area 88, Samurai Gun and Madlax. There are two minutes of Cromartie Special Video Clips

More substantial are the Cultural Notes and Comments, 19 pages in all, which offer insight into the jokes and gags that have a distinctly Japanese perspective in the show, and could use a little extra translation to really be appreciated. 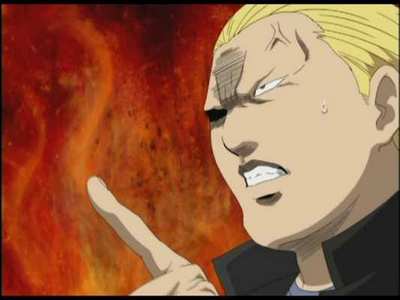 I described Cromartie High School in an earlier review as something of an acquired taste. After four volumes, I`m not all that sure that I have acquired it. Cromartie High School can best be described as an animated sketch show comedy. As such, your enjoyment will depend on how much you get into the characters and the sense of humour. It`s also pretty narrow in terms of its focus, with most of the comedy really just a variation on a theme, that of out of place characters in bizarre situations, and the laughs coming from the sudden reversal. The characters are all variations on a stereotype, the taciturn, tough talking delinquent, and a lot of the humour comes from self-analysis and introspection. This is an extremely talky show.

Once again, the show is at its best when it can develop a joke over its runtime, and the scattershot approach to an episode seems to drag it down. The first episode on this disc is an example of that, with Takenouchi returning in time for another school trip to wreak havoc on his delicate constitution. We then learn that Hokuto`s lackey can`t quit, as he is known only as Hokuto`s lackey, yet no one wants to know his real name. Hayashida notes that Kamiyama has gotten a little hard-edged of late, which invites an episode of social study, with Gorilla as comparative subject. I found the first three episodes weak, but the show picked up for the final three, with Gorilla getting a job as a sushi chef and leading by example, the class starting an animal lovers` club, and the Cromartie Girls` High School episode, living up to the sketch show cliché, that the characters have to appear in drag at least once.

I don`t want to be harsh on Cromartie High School, because the bottom line is that I did enjoy it. But I found it to be nowhere near the laugh riot that hyperbole would have it to be. If you click with its sense of humour, then I`m sure that you will be laughing at it more than I did. But I do believe that it`s a show that you have to be in the mood for. If you`ve had a rotten day and decide to stick in a disc to cheer you up, then I doubt that Cromartie will do the trick. If on the other hand you are in the mood for some deadpan surrealism, then Cromartie will hit the spot. Not for everyone, but it may just be right for you. Yes, you.