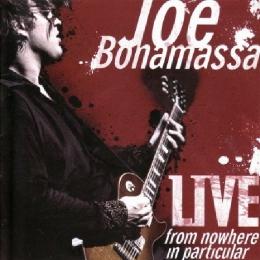 CD
The Ballad of John Henry

CD
To The Bitter End

CD
Out of the Dark

Article
Back-up Photos and Music without a computer with PlexEasy

I was well aware of the tremendous talents of American blues guitarist Joe Bonamassa before I saw him perform live at the Spring & Airbrake Club in Belfast in July 2008. A staple of the fabulous Planet Rock Radio (http://www.planetrock.co.uk), Bonamassa breathed life into a blues-rock scene that rarely crossed over favourably into the classic rock ranks. But his performance in Belfast, part of which you can see below, was stunning.

By the time of his date in Belfast - which was the last of his world tour - Bonamassa had already recorded the "Live From Nowhere In Particular" tracks that would be included on this double album. In fact, his setlist from that evening was largely a replaying of the material across the two discs. That was no bad thing.

Likewise, then, the CD here begins with the scorching yet simplistic rock riff of "Bridge To Better Days", a real taste of Bonamassa's modern blues, and a world away from the clichéd repeated lines of his old-school predecessors. That is not to say that there isn't any true blues on this disc, because the second track, "Walk In My Shadows", has that feeling, albeit in this modern setting.

"So Many Roads" showcases Bonamassa's incredible soloing talents, full of melody and virtuosity in equal measure. "India/Mountain Time" is just about as inspirational as this type of music gets, with a hint of Eddie Van Halen's work on Sammy Hagar's "Eagles Fly" track, as played at Van Halen concerts in the mid-1990s.

The 31-year-old Brooklyn native isn't just a talent on electric guitar, however, as he showed on the opening track of Disc Two, "Ball Peen Hammer". But it's clear that the Les Paul is his favourite instrument, as it doesn't take him long to get back to glorious rock'n'roll, with a quite stunning "Django/Just Got Paid", featuring a rip into the solo section of Led Zeppelin's "Dazed and Confused".

Bonamassa's admiration of Jimmy Page is clear throughout this tremendous set, which - remarkably for a blues-rock album in 2009 - deserves to be listed with the likes of Thin Lizzy's "Live and Dangerous" and Deep Puriple's "Made in Japan", as one of the best live recordings ever released. Fans of the blues or standalone rock genre cannot afford to pass up this listening opportunity, nor can any fans of classic rock guitar playing, given Bonamassa's constant odes to Page, Gary Moore, and the great Buddy Guy.