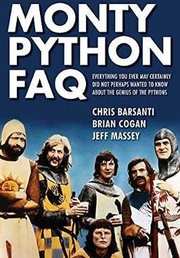 Monty Python FAQ: Everything You Ever May Certainly Did Not Perhaps Wanted to Know About the Genius of the Pythons (Book Details)

Article
The Statue out on DVD in June
Recently Added Items

Review for Monty Python FAQ: Everything You Ever May Certainly Did Not Perhaps Wanted to Know About the Genius of the Pythons

This is how it all began. In 1969 the world had the madcap lunacy of Monty Python's Flying Circus thrust upon them. For Four Series, Five Films, multiple books, records and countless solo work Graham Chapman, John Cleese, Terry Gilliam, Eric Idle, Terry Jones and Michael Palin changed the face of comedy forever. True, others came before like The Goons and Beyond the Fringe, but this was the first time that the worldwide landscape of comedy was inspired. If you watch any comedy, any sketch show you can see the thumbprint of Monty Python there.

Even if you have never watched the TV show you will be aware of some aspect of the team's creation. Whether it is Holy Grail 'It's only a model!' Life of Brian 'He's not the messiah, he's a very naughty boy!' or possibly Meaning of Life 'Pray that there's intelligent life somewhere up in space cos there's bugger all down here on earth!' If you grew up in England you will be aware of Monty Python and why it is so important.

This book delves into the creation of Monty Python, what the six did before and after and everything in between. Monty Python FAQ should be a slamdunk for me. I received this book thinking I will read this book in a matter of hours, this is true, though not in a good way. I found reading this book to be a real chore. I thought it would be more in depth than it was, but unfortunately it really is, if anything, 'A Beginner's Guide to Monty Python'. I read thinking 'Well they missed that... and this... and that' at times the three writers seemed more interested in telling their own jokes (asides akin to The Book from Douglas Adams' The Hitchhiker's Guide to the Galaxy) that I got lost.

It is true, that if you want a quick overview of the world of Monty Python this book is perfect. All the films are covered, though not long enough, but my issue is that the book seems to spend more time on the career's of the Pythons before and afterwards than they do on Python. The entire Four Series are discussed in less than 90 pages and then they spend less than 50 pages discussing Monty Python and the Holy Grail, Life of Brian and The Meaning of Life? This is shocking. I would have expected almost 100+ pages on each of these films alone? I understand that if they had done this then it probably would have been 4-500 page book, but I spent the first 70 pages of the book immitating God from Holy Grail...

I felt at times that this may have been better as an e-book so that you could at least skip to sections and read the bits that you wanted to look at. To be honest, I expected the book to an A-Z or some kind of format that you could follow rather than what is quite clearly just a biography of what the team did before, during and after. Nothing is missed out, which is fine in a way, but with so little time spent on things that I wanted to read about I finished this book feeling a little cold.

It is possible that this is me just being picky, sometimes a nods as good as a wink to a blind man, you know what I mean squire? I would have preferred something a bit more indepth and more time spent on certain things (Though I do feel spending so little time on the films is shocking).

But... and this is a big BUT (To quote Mr Hilter) if you are a fan of Monty Python and haven't read other books, seen other documentaries and simply wanted an overview and a quick look at what the team created then this does its job.