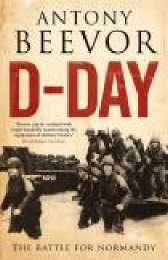 Book
The Fall of the Roman Empire

Review for D-Day: The Battle For Normandy

D-Day: The Battle for Normandy, by Antony Beevor, Penguin Books, paperback 2010, £16.99 (pp 592)
This book by a well-respected author charts the decisive blow against the Nazi regime in the west - the D-Day invasion of Normandy and the return of the allies to France. It covers an enormous canvas, albeit the action itself takes place on a narrow, constrained front by reason of geography. It moves easily from the strategic to micro-tactical front line operations, taking in the actions and feelings of the highest to the lowest, both military and civilian. As you read the book, you'll live the action, especially the carnage on some of the landing beaches and the fears of advancing tank crews in the face of the German tank-busting 88s. And through it all, Beevor does not lose control. It's not a book to be read if you've been brought up on a British popular discourse of 'We won the war' (with a little help from our friends), the 'we' being Britain, as you'll be in for some shocks. Beevor's clinical analysis is one of warts and all, not sparing the reputation of units, personalities, popular folk heroes and the quality of weaponry on both sides and exposing the quarrels and jealousies among the protagonists. The passage of time and meticulous research has allowed him the privilege.

I must confess to being a map geek, stemming from military training and manifest in antique map-collecting. Although there are good maps to chart the movements of units in particular campaigns, I would have welcomed a fold-out map of the whole region. As an alternative, I suggest the purchase of a good map of the region would be useful in following the action on the ground. It's ironical that Hitler too was a map obsessive - but in his case it proved a hidden asset to the allies as his scanning of his maps far from the front fed both his fantasies of himself as a strategic genius and the unrealistic demands he made on his generals. Little wonder that some had scant respect of 'the bohemian corporal' as von Rundstedt dismissively described him (p 327). As Beevor puts it after the July bomb plot, '... Hitler's belief that providence had saved him made him even more convinced of his own military genius, to the despair of his generals.'

Given the canvas that Beevor covers, it's easy to get yourself lost in the fog of war - so many units, so many commanders, so much movement. Indeed, you'd not be alone as the generals themselves often lost touch with units under their command. Radio communication was often a problem, given the limitations of the hardware of that era and the sometimes rapid movement of mechanised units. On a tactical level, it could have disastrous consequences in friendly fire incidents, especially where aircraft were operating in close support. But to return to my main point, it would be worth while keeping a notebook to hand to record units and their commanders, as well as the sometimes frequent changes of command that ensued as generals were dismissed, killed or promoted.

The Second World War is a well-tilled field, but I personally learned much from Beevor's fascinating account. I felt for the meteorologist who had to stand by his forecast of a six hour lull in the stormy conditions in the Channel and for Ike who had to take the ultimate decision. My admiration for him grew when I learned that he had penned a mea culpa against the distinct possibility that the invasion might prove a failure. Here was a man who was prepared to shoulder the blame alone had a disaster like the Dieppe raid ensued. The failure early on to learn lessons of infantry-tank co-operation, the inferiority of so much of the Allies' weaponry; the extent of the mechanisation (and fuel needs) of the US forces, such that one German remarked on a 'rich man's war (p 433) ; the First World War level of casualties in some of the early meat-grinding battles to wear down the German forces; the total Allied control of the air (and yet how ineffective it often proved in the light of later evidence); the superiority of Allied intelligence and the success of Ultra intercepts; the ruses and subterfuges - these and many other data fuelled my admiration for the book, as did the reporting from the grassroots: moments that were heroic, tragic, macabre, vengeful and compassionate ... and even occasionally humorous. Elements in a Shakespearean tragedy, perhaps.

But don't take my word for it - read it for yourself!
Ken Giles