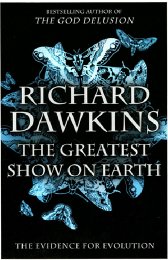 Article
The Marketing of Psychics

Game, set and match to Dawkins!

This book on the argument for evolution should carry a health warning if you are a dyed-in-the-wool creationist, intelligent designer or 'young earther', as Dawkins is at pains to demolish the thinness of the counter-arguments such deniers attempt to present.  But if you are reasonably educated and open-minded enough  - and minded to know more about 'The Greatest Show on Earth', aka the story of evolution - then you could do no better than turn to this lucid, exhilarating, robust  and carefully argued tracing of the case for evolution, by a formidably learned polymath.

The book is for the interested layman rather than for the professional as it sets out to dot the i's and cross the t's of the evidence, using plenty of everyday analogies. The book begins with two gentle introductory chapters that among other things unpack the meanings of 'fact' and 'theory', given the deniers' mantra that 'evolution is only a theory'. Chapter 2 introduces the case against the immutability of species ('essentialism') via a run through the evidence from the domestication of plants and animals - from wolf to Pekinese; from wild cabbage to cauliflower - all beautifully illustrated by coloured plates.  The chapter ends with '...the idea of the gene pool that is central to the body of knowledge and theory that goes under the name of the 'Neo-Darwinist Synthesis'' - shuffling the cards, to use Dawkins' analogy.

Chapter 3 presents the case for natural selection as the driving force of evolution - and indeed co-evolution, while Chapter 4 covers longer term evolution.  Dawkins explains both the evidence for the fossil sequence and how geo-physicists measure the age of the earth. The reader is thus treated to some of the basic physics and chemistry of the periodic table to explain the 'radioactive clocks' used by geologists to date rocks. (Sorry, young earthers, the case for the earth are being merely around 10 000 years old and for walking with dinosaurs just does not stand up! As Dawkins puts it, with no holds barred, 'If the history deniers who doubt the facts of evolution are ignorant of biology, those who think the world began less than ten thousand years ago are worse than ignorant, they are deluded to the point of perversity ' (p85)) .

Chapter 5 'Before Our Very Eyes' looks at evidence for  evolution in our lifetime, such as the reduction in elephant tusk length in response to poaching, Endler's work on the evolution of guppies,  and in particular Lenski's elegant work on the E.Coli bacteria. Chapter 6 nails the controversy about so-called 'missing links' and the gaps in the fossil record. Whereas we're lucky to have fossils at all, 'The fossil evidence for evolution in many major animal groups is wonderfully strong' (p146), including so-called 'intermediates' like Tiktaalik, the perfect missing link between fish and amphibian.  And, significantly, there never has been a fossil found in the wrong stratum.  We just did not walk with dinosaurs - period!  Jibes about the lack of evidence for transitional animals such as 'fronkeys', 'elephanzees', and 'crocoducks' displays a complete misunderstanding of how the evolution of species works. As if to point the moral and adorn the tale, Chapter 7 traces the evolution of Homo sapiens and contains a wonderful interview with a leading creationist - like talking to a brick wall and enough to make Popper turn in his grave!

However, the fossil evidence is not even necessary to prove the case for evolution, for there is plenty of evidence from the comparative study of modern species and their geographical distribution, as the next chapters show. Chapter 8 on embryology and the way cells obey local rules without an overall blueprint or master plan needs close, careful reading. It takes us through the bio-chemistry of cell division (enzymes and catalysts) and the effect of gene mutation.  As Dawkins puts it, 'Natural selection favours the survival in the gene pool of the genetic mutations responsible for making changes in embryos'(p250). Chapter 9 deals with 'dispersion' - the chance separation of sub-species in metaphorical  'islands' leading to speciation, Darwin's famous Galapagos islands being a real example. However, Dawkins takes the argument into territory unknown in Darwin's time - plate tectonics and the break-up of the super-continent of Gondwana into the continents we know today with their unique cargoes of animals.

Dawkins is by now in full flood (Sorry, Noah!), piling up evidence upon evidence.  Chapter 10 deals with the  'homology' of mammal and vertebrate skeletons and the modifications over immense periods of time that leave traces of the gradually modified ancestral common ancestor's skeleton in today's species.   There's evidence too from crustacean exoskeletons for common segmentation.  It's another chapter that needs close and careful reading, especially when Dawkins deals with molecular comparisons which provide even more compelling evidence of common ancestry.  The knockout blow is that the DNA code is invariant across all living creatures and points to descent from a common ancestor. Furthermore, comparative DNA evidence can be used to decide which pairs of animals are closer cousins than others - and, yes, our closest cousins really are chimpanzees!

'History is written all over us', as chapter 11 tells us - not just the vestigial wings in flightless birds, the traces of ancestral  legs in whales  or of  eyes in sightless cave-dwelling creatures, but the vestigial relics in humans, such as the coccyx.  Nature doesn't work to a blueprint but makes do and modifies what it's got - hence the 'mess' left by evolutionary changes and the manifold evidence of unintelligent design, such as post hoc compensations for design errors.  Alas for creationists and intelligent designers, their much beloved human eye is one of the many examples Dawkins quotes of unintelligent design - and I speak from myopic and astigmatic experience!   I could go on about my back problems as well, but this is perhaps not the place... And history is written all over us in the role of hox genes - both insects' and vertebrates' segmentation is mediated by parallel sets of such genes because of shared ancestry.

The penultimate chapter (12) looks at competition - the 'tallest tree in the forest' and the 'hunter - prey arms race', leading to risks and trade-offs, to costs and benefits. As for the apparent (to our eyes) cruelty of nature, in spite of 'famine and death' it has no evil intentions - gene survival is sufficient explanation for callous indifference to suffering and pain in the struggle for survival.  Theologians have been much exercised about how a benevolent creator could sanction such a world.  Free will and 'Theodicy' is their take on the problem, as Dawkins explains.   And to critics who ask why we don't witness spontaneous generation of life today, he answers that the current earth is vastly different from its primitive forebear and, besides, spontaneous generation only had to happen once!

Dawkins' final chapter is a homage to Darwin and a fitting, and rousing, crescendo to his own magisterial work.   To those who see Darwin's 'On the Origin of Species' as leading to bleakness and despair, Dawkins, echoing Darwin directly, can counter with his final sentence: 'We are surrounded by endless forms, most beautiful and most wonderful, and it is no accident, but the direct consequence of evolution by non-random natural selection - the only game in town, the greatest show on Earth' (p426).

As a reasonably scientifically-literate and interested layman, I cannot do better than heartily recommend 'The Greatest Show on Earth' to those who, like me, share a lively curiosity about the world around them. Dawkins, the former Charles  Simonyi Professor for the Public Understanding of Science at Oxford University, carried me along, not only with his broad understanding of the sciences, but his basic humanity.  To those who would say that the case for evolution was long ago won, I would refer them to Dawkins' appendix where he provides statistics about the numbers of people across the world, and particularly in the USA, who believe in the creation myths of a bronze age pastoralist society and that the world is less than 10 000 years old.  (They could not do better than couple a reading of Dawkins with that of his fellow Oxford academic and Reader in Ancient History, Robin Lane-Fox's (1992) 'The Unauthorised Version: Truth and Fiction in the Bible' (Penguin Books)).   As for me, it's game set and match to Dawkins.