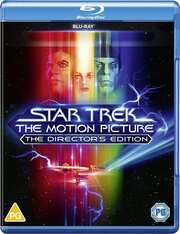 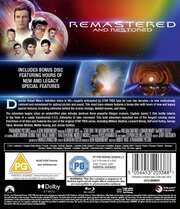 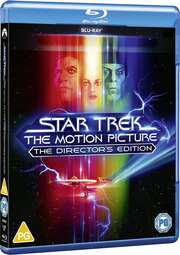 Review for Star Trek: The Motion Picture - The Director's Edition

I’ve just gone and triple-dipped on a Blu-ray. 2010’s release of Star Trek the Motion Picture wasn’t the ideal HD experience, marred by DNR and post-processing, so naturally, getting the 2021 4k re-mastered Blu-ray was an obvious choice. And then they went and announced the 2000 Director’s Edition would finally get the HD and UHD treatment. What else could I do? Yet I don’t even enjoy Star Trek the Motion Picture all that much. It’s clear at this point I have a serious impulse control problem when it comes to home entertainment!

However, a Blu-ray release of Star Trek The Motion Picture – The Director’s Edition is both long overdue, and ultimately very timely as well. When the film was released theatrically in 1979, director Bob Wise’s vision was compromised by several factors, not least a release date set in stone. This resulted in the studio getting final cut, and a film released with incomplete special effects and audio. For a long time, it was felt that it was Jerry Goldsmith’s score alone which saved the film from ignominy, and ensured Star Trek became the juggernaut franchise that it is today.

Twenty years later, at the dawn of the DVD era and at the height of the fad for directors revisiting their films with new definitive cuts, Bob Wise at last got the chance to bring his vision of Star Trek The Motion Picture to fans. But Paramount, with their infinite lack of foresight, only ponied up enough money to complete the project at SD resolution, thinking that it would be a home video phenomenon alone. Ten years later, TVs were in high definition, and not long after that, Ultra High Definition as well, and The Director’s Edition was only watchable at 480 lines of resolution. Then last year, Paramount finally loosened their death grip on the purse strings, and they also opened up the film vaults. The Director’s Edition of Star Trek The Motion Picture has finally been future-proofed for film, as well as home video releases in 4k UHD as well as Blu-ray.

The historic five-year mission is over. James T. Kirk languishes at Star Fleet Command as an Admiral, Doctor McCoy is happily retired and Spock is pursuing total logic on Vulcan. The Enterprise has been redesigned and refitted, and is destined for the command of Will Decker, a brash young Captain who reminds Kirk of who he used to be. All this changes when an alien cloud the size of a solar system comes into conflict with the Klingons. The Klingons are destroyed and the cloud continues on its course towards Earth.

Alarmed, Starfleet orders the Enterprise to be made ready and to intercept the intruder. Kirk takes the opportunity to regain his command and displace Decker as captain of the Enterprise. Reunited with his old crew, Kirk is finally back doing what he’s best at, commanding a starship, exploring the unknown. But is he the same man he used to be? Are any of them?

The Director’s Edition gets a 2.39:1 widescreen 1080p transfer, and the choice between Dolby Atmos English, Dolby Digital 5.1 Surround French, German, and Spanish, with subtitles in these languages and Danish, Dutch, Finnish, Norwegian, and Swedish. The original DVD release reconstructed the film from what was at hand, with new digital effects completed at 480 lines of resolution. That obviously meant that the whole project had to be done again from the beginning for the best possible presentation. This time the film vaults were opened, and the producers had access to the original film elements, the dailies, and the ADR tapes, so they could basically build the film up again from the beginning, adding the new effects at 4k resolution, re-compositing the original effects shots from the ground up, correcting the flubs from the theatrical version, and getting rid of the softness from the original film dubbing process. The audio mix was created anew in Atmos, and they found original ADR elements that were meant to be used but never were. The Enterprise now feels like a populated ship. There are some new sound effects too. Most importantly, the film was colour timed once more, and processed for HDR presentation.

It’s a cliché at this point, but you’ll have never seen or heard The Motion Picture like this before. The image is clear and crystal sharp, and there are colours on screen that weren’t in any previous presentation of the film. The Enterprise interiors no longer feel like monochrome, and I finally realised that Ilia was wet when she came out of the sonic shower. The original film elements have come up a treat, while the additional effects, such as Vulcan’s arid landscape, and future San Francisco look excellent in HD. You’ll even appreciate the new opening title font.

For the first time in these 4k double-dip Star Trek Movie upgrades, Paramount have found some new extra features to go with the new transfer, enough that the extras now get a second disc all to their own. Indeed there is a limited edition 3 disc release which also comes with the 1983 Extended TV version, but I’m not that far gone... yet.

You get two discs in a BD Amaray style case with one on a centrally hinged panel, with the case wrapped in an o-card slipcover. The film disc has a static menu, while the extras disc has an animated menu.

The feature film disc comes with some extras too including a new commentary recorded in March 2022 featuring the Director’s Edition producers, David C. Fein, Mike Matessino, and Daren Dochterman.

The 2000 commentary featuring Robert Wise, Jerry Goldsmith, Stephen Collins and effects supremos, Douglas Trumbull and John Dykstra is here, along with the text commentary from Mike and Denise Okuda.

Now I’m feeling a little buyer’s remorse over that 2021 Theatrical Cut Blu-ray release, as this Director’s Edition really is the definitive way to enjoy Star Trek The Motion Picture. Back in 1979, the execs wanted their money’s worth on the screen, and for them that was the effects shots, which meant character and narrative was left on the cutting room floor. The 1983 TV version put that back, but kept the effects as well, resulting in an over-long and uneven film. The Director’s Edition trims the fat from the film, while restoring enough of the character moments to make watching it a more empathetic experience, without slowing the pace down.

This was true with the 2000 Director’s Edition DVD, and it’s just as true for this 2022 Blu-ray (and no doubt the UHD as well), but there is one big difference worth mentioning, and that is the quality of the presentation, and the work put in to realising this release of the film. It’s as if that DVD version was the blueprint to this release, the animatics that served as proof of concept, a half-way house even. There were always little niggles I had with the DVD Director’s Edition, janky new effects shots, and of course the low resolution.

The producers have used that DVD as a guide to creating this new release, with effects shots that have been completely redone, and future-proofed, and with the film given a full restoration when it comes to the visuals and the audio. I still find it hard to believe that there was so much colour in the production design that was simply lost in the original transfer. The film elements look brand new, while the audio has never sounded richer and more vibrant. The Enterprise actually sounds like a living starship now, instead of the occasional soundstage experience that the theatrical version still had.

Now having said all of that, this is still Star Trek The Motion Picture, slow and ponderous, and placing the importance of spectacle ahead of character, concepts ahead of narrative. The Director’s Edition does its best to shift the balance in the other direction, but it can’t work miracles. But with this spectacular looking, and sounding Blu-ray release, you can now say that after 42 years, they’ve finally finished production on Star Trek The Motion Picture!