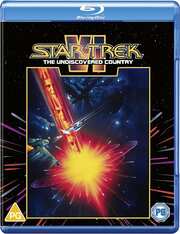 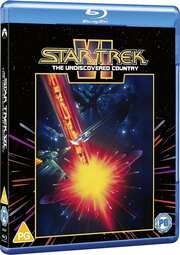 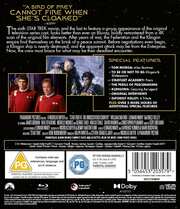 I have to accept the truth. Despite all my protestations to the contrary, I am still a Star Trek fan. I may not rave about the most recent entries into the franchise, but I was still desperate to get a better version of Star Trek VI on Blu-ray. That’s even though I have a lot of problems with this film, its story and the way it handles the characters. Were it not for Star Trek Nemesis, it would be my least favourite Trek feature. Yet this is the film that I wanted the most to get the 4k restoration that the original cast movies have received the last two years. It did after all get the worst treatment of the films on Blu-ray back in 2010, with DNR and filtering so bad that detail was scrubbed from the film, leaving the actors looking more plastic than Barbie. Let’s see if a decent transfer can change my mind about the film at this point.

When the Klingon moon Praxis explodes, devastating their home planet’s ecology, and effectively dooming the Klingon Empire, it serves as an opportunity for some kind of meaningful peace between the Federation and the Klingons. To that end, it’s Captain Kirk and the crew of the Enterprise to whom the duty falls to facilitate that peace, when they are ordered to meet the Klingon Chancellor Gorkon, and escort him to Earth for peace talks. That doesn’t sit well with James Kirk, who with his crew is on the verge of retirement, and who still holds a grudge against the Klingons for the death of his son. It turns out that someone holds more than a grudge when Gorkon is assassinated, and Kirk and McCoy are framed and arrested for the crime. Now it falls to Spock and the Enterprise crew to rescue their friends from a Klingon gulag, uncover the conspiracy behind it all, and salvage the peace mission.

The Undiscovered Country gets a 2.35:1 widescreen 1080p transfer on this disc, and you get audio in Dolby TrueHD 7.1 Surround English, and Dolby Digital 5.1 Surround French, German, Spanish and Japanese with subtitles in these languages and Danish, Dutch, Finnish, Norwegian, and Swedish. The problems with the original Blu-ray release have been addressed with this 4k restoration. The grain is back, and the movie looks properly filmic in playback. Detail levels are good, colours are rich and consistent, and skin tones... well skin looks like skin on this disc, not plastic any more. The audio is much the same as before, the surround gives the film some presence although it could be a little more dynamic when it comes to the more explosive moments. And once again, Paramount either miss a trick, or invite yet another double dip, by not including the original theatrical audio formats. Speaking of original theatrical, I first saw The Undiscovered Country with a 70mm print, and that hasn’t seen a home video release since the original widescreen VHS, which was 2.20:1 aspect ratio. That’s another thing to bug Paramount for.

You get one disc in a BD Amaray style case, wrapped in an o-card slipcover. This release uses the original poster art if you want to distinguish it from the 2010 BD. The following extras are on the disc, and given that they are the same extras as the previous BD, I’ll avoid the detail this time.

There are two commentaries on this disc.
Library Computer is the glorified pop-up trivia track.
The Perils of Peacemaking featurette is here
Stories From Star Trek VI contains 6 featurettes
The Star Trek Universe contains 8 featurettes
The Farewell to DeForest Kelley is here
There are 8 Original Interviews
There are three flavours of trailer in Promotional Material

There is some new material on this disc, although I can’t really get thrilled by a 3:24 behind the scenes Production Gallery or a handful of Storyboards.

A better transfer didn’t help at all. I still don’t enjoy The Undiscovered Country. I loved it when I first saw it in 1991, it was briefly my favourite of the lot, and it all had to do with the obvious allegory, pertaining to Chernobyl, the fall of the Berlin Wall, and glasnost. In 1991 that was a big deal, when we briefly and idealistically thought that world peace was a genuine likelihood. There was also the slightly more subtle allegory as it applied to racism and civil rights. It was the perfect Trek movie for that time. It really should have stayed there, as it doesn’t work anymore, indeed stopped working just a few years after.

Here’s the thing... The Undiscovered Country’s cold war thriller storyline can only work because it assassinates the characters, and it dismisses what Star Trek has always been about for what was then 25 years, and is now a 50 year legacy. Boldly going, seeking out new worlds, new civilisations, it was always about openness, about understanding, about trying to find peaceful solutions to conflict first. It was about the wonder of the unknown, about exploration. This film can only work by painting the Federation as a whole, and the Enterprise crew in particular as bigots. That flies against everything that I learned about original series cast from three seasons of television and five prior movies. I can no longer buy Kirk’s hatred of an entire species for the actions of one individual. The same goes for the frosty attitudes and snide comments from the rest of the crew; Chekov’s “Guess who’s coming to dinner”, although Scotty’s “Klingon bitch” line is restricted to the home video version.

That might be the one benefit of this and the previous Blu-ray. We get the theatrical release only on this disc, which lacks the General West plot arc which leads to that terrible Scooby Doo ending in the home video version, as well as Scotty’s minor misogyny and a couple other small character beats.

The plot also only works if the Enterprise crew are fundamentally stupid as well as bigoted. I could, and will point out character moments that just don’t stand up to scrutiny, leafing through vintage paper books to find a Klingon phrase (you’d expect Uhura to speak some Klingon, she speaks Romulan in the reboot), Chekov, chief of security in The Motion Picture, doesn’t know how phasers work on a starship 12 years later, McCoy not knowing Klingon anatomy (he figured out how to cure a Horta in a few minutes, despite seeing one for the first time), and the crew generally so inept that they need a Mary Sue Valeris to tell them how to do everything.

Speaking of vintage books, Nicholas Meyer may have indulged his Hornblower fascination in The Wrath of Khan, but he overdoes it here, leaching all colour out of the sets, the Enterprise bridge now a forbidding, dark submarine grey, the pointless and continuity wrecking digital clocks, the crewmen triple bunking, the ship now having a galley (what happened to the disc operated food tubes from the original series?). Meyer reshapes Trek to conform to his vision, and the end result doesn’t hold up to scrutiny or extended thought.

There are a few character moments that still sparkle in this film, the performances are strong (I love Christopher Plummer as Chang), and I certainly still appreciate the send-off for the original series crew, that hint of Peter Pan recalling all that was best about the original series, but the film itself doesn’t work anymore, and it really does belong back in 1991. Although I did have the thought last night, that if this weren’t a Star Trek movie; rather a generic sci-fi, I wouldn’t have any problem with it, and would enjoy it a lot more. Maybe, just like Star Trek IV: The Voyage Home, this film is one you can show to non-Star Trek fans, or dabblers in the franchise and get a more positive response.