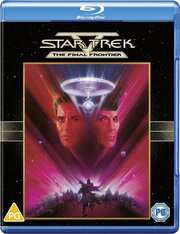 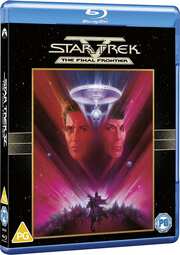 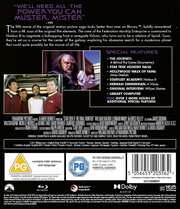 I’ve been denying it for several years now, ever since I got disillusioned by Voyager and Enterprise. The subsequent movies and most of the recent streaming franchise have done little to endear me to Star Trek. But I have to admit that I am still a Star Trek fan, enough of a fan for me to double dip on the lesser original series movies to take advantage of the recent 4k restorations to replace those dismal Bu-rays that were originally released, replete with post-processing and DNR that pretty much wrecked the image. Still, Star Trek V isn’t that bad. It’s not even my least favourite original cast movie.

An enigmatic Vulcan has taken the representatives of the three major powers hostage on a barren world in the Neutral Zone. This untimely crisis interrupts the hard earned vacation time of the Enterprise crew, although Scotty has foregone his leave to repair the new Enterprise, a ship with more than a few teething troubles. The rescue mission goes badly wrong when the crazed Sybok captures the landing party. He reveals his intention to steal the Enterprise and take it to the centre of the galaxy, where lies the fabled planet of Sha-ka-ree and an encounter with divinity itself. Sybok has a mental power that converts people to his cause, and Kirk finds his own crew turned against him. Meanwhile the Klingons aren’t far behind.

The whole point of getting this disc is the improved image quality, a 4k restoration of the film, which was used for the UHD release quite obviously, but which Blu-ray users can take advantage of with this release. The 2.35:1 widescreen transfer is clear and sharp, but the grain is present and correct, which allows for a greater level of detail in the film. Colours are rich and consistent, with skin tones looking natural and realistic, not plastic at all. I was seeing detail that I had never seen before, or at least not since 1989. I didn’t realise that the ‘horses’ on Nimbus III were actually blue. The one downside of this quality transfer is that it highlights just how lowest bidder the effects are. Ironic really; they wanted Sean Connery in the role of Sybok, and he was off making Indiana Jones and the Last Crusade, who wound up filling ILM’s time when The Final Frontier needed a quality effects house.

You have the choice between Dolby TrueHD 7.1 Surround English, and DD 5.1 German, Spanish, Japanese, and French, with subtitles in these languages as well as Danish, Dutch, Norwegian, Finnish, and Swedish. It’s a nice surround track, rich and enveloping, putting you in the middle of the action without overcooking the sound design (this would have been a stereo film in theatres back in 1989). The dialogue is clear, but Jerry Goldsmith’s score seems smaller than in previous films, especially the epic Motion Picture, almost televisual in scale.

You get one disc in a BD Amaray style case, wrapped in an o-card slipcover. This release uses the original poster art for the film, if you want to differentiate it from the previous Blu-ray release. The disc boots to a static menu.

There are two commentaries on this disc, with the first from father and daughter, director/star William Shatner, and movie biographer Liz Shatner, and is a proper retrospective on the film. The second is a little more critical and perhaps objective, from Michael and Denise Okuda, Judith & Garfield Reeves-Stevens, and Daren Ochterman.

The Library Computer is that fancy pop-up trivia track.

There are six vintage featurettes in Production, all presented in SD. These run to a total of 64 minutes.

The Star Trek Universe offers 8 more featurettes, two in HD running to a total of 13 minutes. The six in SD run to 72½ minutes.

There are 4 deleted scenes on this disc presented in SD and running to 4:17. There’s also a 1:08 Gag Reel, which I don’t believe was on the previous release. Neither were the Production Gallery and Storyboards.

The two theatrical trailers are presented in HD, while the 7 TV spots are in SD.

I like Star Trek V for most of the character moments. It’s not a great movie, I have no illusions about that, and ultimately it fails in what it’s trying to achieve. But it is a movie that aims high and falls flat, as opposed to the TNG films and particularly the Abrams reboots that keep aiming for the low hanging Khan fruit. But no other Star Trek film has so perfectly recaptured the feeling of the original series, particularly when it comes to the three main characters, Kirk, Spock and McCoy. It also doesn’t do too badly with the other characters, although Mr Scott is hard done by with a poorly judged moment of slapstick.

The story isn’t too bad either. No, don’t look at me like that. I am serious! The premise behind the film is a good one, and on top of that, Star Trek V gains added relevance in our age with its look at brain-washing religious fanaticism, which wasn’t as much of an issue in 1989. But the search for God or godlike beings has been a staple of Trek right from the original pilot, when Pike encountered the perception altering telepathic Talosians. Through the years we’ve had the Next Generation crew meet Q, Kirk encountered the Platonians, Trelane, even the ancient Greek god Apollo. It’s also a matter of record that Gene Roddenberry’s first attempt at a Star Trek movie was a script called The God Thing. It’s just that studios get a little wary when sci-fi and religion collide (justifiably so given Battlefield Earth, you might think).

William Shatner had to face a multitude of problems when it came to Star Trek V, beginning with a writer’s strike. Add to that a studio that lacked faith in the film, to the point where they slashed the budget, and reduced the schedule, and it all makes the low quality effects seem like an afterthought than a major problem. It’s a miracle that we got the film at all, let alone with some coherent narrative. The location shooting is fantastic, some of the sets are lush, while others are obviously pinched from The Next Generation.

The film starts off well, its first act is entertaining, it establishes the character dynamics, and it’s a lot of fun. It’s just that as the film progresses, it begins to lose focus. Is it about faith versus reason? Is it about the dead-end of mindless fanaticism? Is it about killing god? Is it about the falsity of institutionalised and structured deity versus the internal and personal spirituality of the self? For most of the film, Star Trek V feels as if it is in search of a message.

Star Trek V has grown on me over the years. While I don’t enjoy the story, I do appreciate it for what it attempts, and while it does that, I can enjoy the character portrayals. Even if Sybok vs. God Sybok at the end gives me Lazarus vs. Lazarus flashbacks from The Alternative Factor, there is much to like about The Final Frontier. Besides, I have a soft spot for films that aim high and fall flat, and you can’t argue that Star Trek V doesn’t aim high.

I’m going to sound like a broken record at this point, but this Blu-ray is essential if you want to watch Star Trek V in anything approaching cinematic quality, and once again, Paramount are holding back for the inevitable next release when it comes to the original stereo audio format, and finding some more extra features.