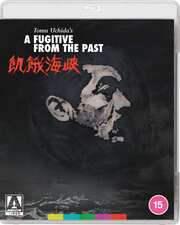 A Fugitive From the Past (Blu-ray Details) 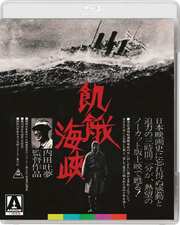 Review for A Fugitive From the Past

A Fugitive From the Past is one of the best pieces of Japanese cinema out there, ranking alongside Kurosawa’s Seven Samurai, and Ozu’s Tokyo Story according to the Jasper Sharp introduction to the film on this disc. This makes it all the more strange that this Blu-ray release from Arrow marks its UK home video debut. Other than a few festival screenings or arthouse cinema showings, there hasn’t been much opportunity for Western audiences to see this film. It may have won seven awards in Japan in 1966, but the lack of global awareness is attributed to just how obscure its director, Tomu Uchida is in the West. Again, that’s strange give that his directorial career stretched from 1922 to his death in 1970, some 70 films.

In September 1947, a powerful typhoon struck the area around Hakodate and Hokkaido, sinking a ferry. At the same time, three thieves struck a pawnbroker, and used the disaster relief to try to get away. In the end only one them, Takichi Inukai made it. When the other two thieves’ corpses wash up, they are initially taken to be victims from the ferry, but police Inspector Yunisaka’s suspicions are raised when no family comes to claim the bodies. Meanwhile, Inukai has taken shelter in a brothel with prostitute Yae Sugito, and in gratitude gives her enough money to pay off the family debts that have indentured her, enabling her to move to Tokyo.

According to the IMDB, A Fugitive From the Past was shot at 2.66:1 ratio, on 16mm film, blown up to 35mm for theatrical presentation. That kind of aspect ratio approaches Hateful Eight territory, and what we get on this disc isn’t quite as narrow, but it does seem tighter than the usual 2.40:1 widescreen. My guess would be closer to 2.50:1 widescreen 1080p monochrome. The image is clear and sharp for the most part; any moment of softness might be down to the original source. Detail levels are good, and contrast is excellent, offering decent dark detail. There is a proper level of grain, making the experience as filmic and organic as it should be, while signs of age or print damage are wholly absent.

You get PCM 1.0 Mono Japanese audio, with optional English translated subtitles. The audio is fine, the dialogue is clear, and there is no distortion, hiss or thinness as you might expect from film audio of this vintage. That makes the haunting music soundtrack all the more chilling. This film is of the vintage where all dialogue was looped in post-production, and lip sync isn’t always up to scratch. The subtitles are accurately timed and are free of typos.

The disc boots to an animated menu and you’ll find the following extras. The first pressing of the disc will also come with a collector’s booklet.

In the Scene Specific Commentaries, various academics discuss aspects of the film against certain scenes. These are as follows.

It’s always a daunting prospect when you sit down in front of a film, and know that you’ll be spending the next three hours with it. It is so easy to just drift away, start watching the clock instead of the screen, and that can be even true for popular and renowned films. Three hours just flew by last night with A Fugitive From the Past, and that’s despite it taking more than a few meandering and unexpected turns through its narrative. What starts off as a crime thriller turns into something quite different, a much more involved character study, and it also paints two distinctly different pictures of Japan in the process.

The story begins in 1947, just two years after the end of the Second World War, with the theft from a pawnbroker, and the murders of him and his family, playing in the background of a typhoon and a shipwreck. The three criminals are looking to escape with their stolen money, and do so by stealing a rescue boat and rowing across the stormy straits. Only one of them, the film’s protagonist Inukai makes it, and he finds brief shelter with a prostitute, rewarding her with a portion of his ill-gotten gains.

It’s when the bodies of his confederates are discovered, and when Inspector Yumisaka connects the corpses to the theft that his suspicions are raised, and the hunt begins. The immediate post war era is one of ruin and hardship, with the thought that the only job that women like Yae can get is prostitution, serving the occupying forces, while men either turn to crime like Inukai, or join the gangs running the black market. Inukai’s flight and Yumisaka’s dogged pursuit takes place against this background, and for the first act, I was getting notes of Les Miserables.

Unexpectedly, the focus then shifts to Yae’s story, as she pays off her family’s debts, and finds her way to Tokyo. Initially, she hopes to get a more respectable job, but being a waitress in a small bar brings her into the criminal underground, far too dangerous. She then goes back to what she knows best, but this time in a more amenable brothel. All the while, she holds Inukai’s kindness in her heart, thinking fondly of the night they spent together, and determinedly adding to the little nest-egg he gave her in gratitude. Ten years pass, and the country starts to flourish again. And it’s in a newspaper that she sees a familiar face, albeit with a different name Kyoichiro Tarumi, and a respectable life. But she still wants to visit this respectable businessman and philanthropist to thank him for the help he once gave her. It doesn’t go as she planned.

The final act returns focus to Inukai and Yumisaka, although at this point we’re in spoiler territory. A Fugitive From the Past certainly has enough story to fill its three hours, and it’s involving and thought provoking. It’s also really quite brave in the way that it denies the audience the expected cathartic conclusion that you would expect from a crime drama. Instead it leans much more into character study, rather than any particular resolution of its mysteries. But it does a very rare thing, really getting inside the psychology of a criminal. I certainly have often wondered at why certain people, responsible for the most heinous of crimes, choose to take the secrets of those crimes to the grave with them, often denying the families of their victims the closure they need. A Fugitive From the Past is the only film I have seen that offers a very plausible explanation as to why this happens.

I may need another viewing or two to really see this film’s greatness, but I did find much to appreciate about A Fugitive From the Past in my first watch of the film. Arrow Video have done a sterling job in bringing it to Blu-ray, giving it the presentation it deserves, and offering plenty of worthwhile extra features as well.