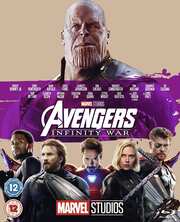 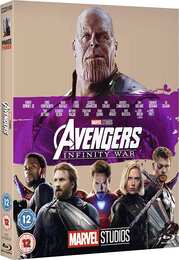 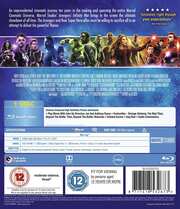 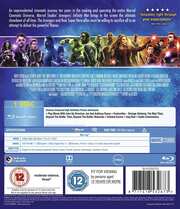 It’s taken me four years, but I’ve finally got to the point that had the whole world raving, the culmination of ten years of story development, through some 18 films and several TV series spin-offs... Avengers: Infinity War, the big-ass mashup of all the Marvel Cinematic Universe characters, as the story that had been building in the background of the previous movies finally took centre stage. It’s time for the saga of Thanos and the Infinity Stones to be resolved. Actually it’s not, as Infinity War is just the first half of the story, with the conclusion to come in three movies time, with Avengers: Endgame, two films that were shot back to back. The movie event of 2018... and I get to it in 2022. I’m always late to the party.

Avengers: Infinity War picks up where Thor: Ragnarok left off, with the Asgardian refugee ship encountering Thanos’ ship. The culmination of Thanos’ plan is at hand, and all he has to do is gather the six Infinity Stones for his gauntlet. He sees the infinity of life in a finite universe as a problem, and he’s been working his way to eradicating half of all life forms, one planet at a time. With the Infinity Stones, he’ll be able to accomplish that with just a click of his fingers. Given that so many of the Stones are currently on Earth, that’s where the final battle will be, and it will take all of the Avengers and their allies to have any chance of stopping Thanos.

Avengers: Infinity War gets a 2.39:1 widescreen 1080p transfer on this disc, with the choice between DTS-HD MA 7.1 Surround English, Dolby Digital Plus 7.1 Surround French, and German, and Dolby Digital 2.0 Stereo English Audio Descriptive, with subtitles in these languages and Dutch, Danish, Finnish, Norwegian, and Swedish. The audio is just as you would hope for from a tent-pole summer blockbuster, bombastic when it comes to the music, impactful when it comes to the action, and an all in all immersive experience. The image is clear and sharp, and makes a decent stab at finding a compromise between all of the MCU franchises’ visual styles. The Technicolor world of the Guardians of the Galaxy doesn’t jar with the grounded reality of the Earth based scenes. Detail levels are excellent, and there is no visible sign of compression or the like. The only nits to pick are with the source, and that would just be the final scene, where the effects budget ran out, and Bruce Banner’s head gets a wobbly composite with the Hulk-Buster Iron Man suit.

You get one disc in a BD Amaray case. The disc boots straight to an animated menu screen, without any pause for trailers. The film offers an optional introduction from directors Joe and Anthony Russo which lasts (1:32). The following extras are also on the disc.

That combination of directors Joe and Anthony Russo and writers Christopher Markus and Stephen McFeely have resulted in two of my favourite MCU movies to this point, Captain America, The Winter Soldier and Civil War, which made a big splash by taking the comic book genre, and twisting it into political thriller territory. The complexity of narrative allows for more interesting character development, and thought provoking stories. I might have hoped for something similar in Avengers: Infinity War, but there really isn’t room. There are just so many character arcs to juggle, that the emphasis really has to be on making sure everyone gets a fan satisfying amount of screen time. Consequently the story has to be really quite simple, in this case Thanos’ quest to find the Infinity Stones and to snap his fingers.

Thankfully there is that ten years of franchise and character development to rely on, with fans having lived with three Captain America movies, three Thor movies, and three Iron Man Movies to this point, as well as films introducing and featuring the other MCU characters. They are so well known by now that the creators take the chance to pull them out of their comfort zones and shake things up, something you’ll hear referred to in the extras as Strange Alchemy. The film takes place on Earth, and in Space, with the Guardians of the Galaxy (with their more direct connection to Thanos, playing a significant part). In many ways, the irreverent Peter Quill (Starlord) is a fulcrum in this film. Early on, the Guardians encounter Thor, which makes for an interesting dynamic. They then split up with Thor, Groot and Rocket going off on one mission, the other Guardians trying to deal with Thanos.

By this point Hulk/Bruce Banner has returned; his warning just ahead of Thanos’ incursion on Earth. Iron Man, Spider-Man and Doctor Strange wind up aboard one of Thanos’ ships, heading into deep space, and that makes for another interesting character dynamic, with Tony Stark butting heads with Strange in a completely different antagonism than that which he usually has with Captain America. They wind up encountering Quill and the rest of the Guardians as well, on what’s left of Thanos’ home world. Meanwhile, the other Avengers are left on Earth, trying to prepare for Thanos’ eventual assault as he gathers the last of the Infinity Stones.

When it comes to character moments and character interactions, Avengers: Infinity War is the gift that keeps on giving, even though the story might be considered simplistic and even weak. There’s only one really interesting character narrative that caught my attention, and that is of Hulk/Bruce Banner. Early on in the film, Hulk gets owned by Thanos, and thereafter refuses to ‘come out to play’. Bruce Banner has to come to terms with that, even have a literal internal conversation, and ultimately has to take responsibility for fighting his own battles. Fortunately he has some serious Iron Man tech at his disposal, which effectively gives him Hulk powers without having to go green.

Avengers: Infinity War is a great piece of entertainment which ends in perhaps the biggest cliff-hanger in cinema history. Back in 2018, cinemagoers had to wait a whole year for the resolution. Thankfully, being late to the party means I can skip that frustration. I just have to squeeze in Ant-Man and The Wasp and Captain Marvel first. The Blu-ray follows the template of all the other Marvel Cinematic Universe releases through Disney, and offers excellent quality, with some decent extras as well.