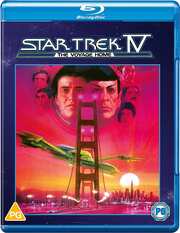 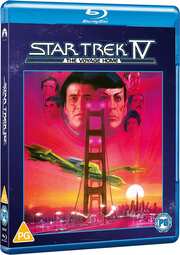 Just how many times am I going to buy these films over and over again? I may be a lapsed Star Trek fan, but I’ve never lost my appreciation for most of Star Trek between the original series and Deep Space Nine. The original series movies are a big part of that, indeed got me into Star Trek to begin with. So there’s a part of me that will always want to own them in as good a quality as possible. I’m a little behind the curve at this point, as I’m still not UHD ready, but the UHDs meant 4k restorations, and that also meant decent Blu-ray releases to replace the DNR afflicted travesties that were previously available. I thought when I bought The Voyage Home’s restored Blu-ray last year that my journey could take a pause, but this September (2022), has seen the release of 4k restorations of Star Trek V, and VI, as well as the reconstructed Director’s Cut of The Motion Picture, and once again, there are new Blu-rays to go along with the new UHDs. The five year mission has long since become an ‘ongoing’ mission.

Of the first four Star Trek movies (and given that The Wrath of Khan got its 4k restoration some years previously), I’ve been looking forward to a decent Blu-ray of The Voyage Home the most. While it isn’t my absolute favourite of the franchise, it is still, after almost forty years, the most mainstream audience friendly of the films, and I’d say critically successful as well. It also does something completely different from all the other films with doomsday weapons and arch-villains. It’s a Star Trek film with an eco-friendly message, and it’s a comedy to boot.

Following the resurrection and rescue of Spock at the Genesis planet, the crew of the late starship Enterprise have been taking sanctuary on Vulcan while Spock recovered from his ordeal. But the time has come for them to take their stolen Klingon ship, return to Earth and face the charges brought against them, not least of which is the theft and destruction of the Enterprise. But as they return to Earth, it becomes clear that the planet is in peril of imminent destruction. A probe has arrived and its energy emissions are disrupting all power supplies, and altering Earth’s climate to destructive effect. All ships have been ordered to stay away, but Spock has recognised the transmissions of the probe, and that gives Kirk a chance to save the world. But the solution to this crisis can only be found in San Francisco, that’s San Francisco of the year 1986.

Star Trek IV: The Voyage Home gets a 2.35:1 widescreen 1080p transfer, and finally, the grain is back. Gone are the plastic faces of the first Blu-ray release, and instead we get the film as it should be seen, properly filmic, with excellent detail and rich, consistent colour. The obvious improvement is in skin tones, but I was still seeing aspects of the film last night that I had never seen before, so much of an improvement it is. The audio options are different from the previous Blu-ray release, although the Dolby TrueHD 7.1 Surround English track is much the same as before. You also get Dolby Digital 2.0 Surround French, German and Spanish, and 5.1 Surround Japanese, with subtitles in these languages and Danish, Dutch, Finnish, Norwegian, and Swedish. And once again while the English audio track is immersive and impressive as before, Paramount have missed a trick by not including the original theatrical audio track, no doubt priming customers for yet another dip.

You get one disc in a BD Amaray style case, wrapped in an o-card slipcover. I do like that these new restorations use the original poster art, and makes it easy to differentiate from the previous releases. But in terms of extras, there is nothing new on this disc, merely repeating what came before.

There are two commentaries on this disc, one with William Shatner and Leonard Nimoy from the original 2-disc DVD, the other with Alex Kurtzman and Roberto Orci recorded for the Blu-ray.

The Library Computer trivia track is present and correct.

Production has 5 featurettes, 4 of them in SD from the DVD release running to 51:06 in total while the HD featurette runs to 6:09.

There are two featurettes on the visual effects which together last 17:31 SD.

There are three original interviews with the big three running to 43:15 SD.

There is a Production Gallery, Storyboards, and the Theatrical Trailer.

Star Trek IV is the best Star Trek movie. It’s the most popular, the most entertaining, and it’s the one that most non-fans watched. It’s not my favourite, but then again, I was a Star Trek fan inculcated with some 20 years of continuity at that point, and I knew what a big deal a sequel to Space Seed was. But if you had never seen Star Trek before, this was the movie to watch. It also managed to work without the benefit of continuity; I watched Star Trek IV before I had seen The Search for Spock and I had no problem understanding its story.

The Voyage Home was the last Star Trek film without a villain. There was no need for a lunatic with a doomsday weapon back then. The fourth film was like so many of the television episodes, the crew having to deal with an issue, solve a problem. An unfathomable probe attacks Earth, and the way to communicate with the probe lies on Earth of the past, which sets up the time travel plot. Come to think of it, The Voyage Home was also the last Star Trek film with a message aside from midlife crises for the main characters. We may be greener now, aware of the impending climate change apocalypse unless we act, and can see that mindset filter down to all aspects of conservation and awareness of green issues, but even in 1986 people were aware of issues such as acid rain, of deforestation, of the ozone layer, and yes, the Greenpeace imperative to ‘Save the Whales’. Star Trek IV’s story did much to promote that message.

Best of all, Star Trek IV was fun. After a whole lot of death and destruction in the previous two films, this one was light, entertaining, and charming. Time travel brought our futuristic galactic adventurers to then present day Earth, and threw them into a whole lot of comedic culture clash situations. It was delightful and it was fun, and it was something that broad audiences could relate to in a way that they wouldn’t engage with warp drives, mind melds, phasers and beaming. It is the funniest Star Trek movie to date, but in many ways it is closest to the Star Trek ethos, using futuristic sci-fi as a lens to examine an issue that is very human, and very now. That it added a layer of comedy to proceedings only made that process more effective.

The Wrath of Khan is my favourite Star Trek movie and always will be. After all, it’s the movie that made me into a trekkie in the first place. And including that VHS recording of the TV broadcast, it’s the Star Trek film I have watched the most. But if I was being brutally honest, and kept the count to home video releases, pre-recorded VHS, DVD and now Blu-ray, I’ve actually watched Star Trek IV: The Voyage Home more often. And once again, this Blu-ray mastered from the 4k restoration lets you see the film as it was meant to be seen. I guess we’ll have to wait for the next release to hear it as it was originally intended to be heard.