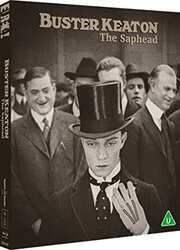 Synopsis:
In 1920, having served a slapstick apprenticeship in the shorts of Roscoe “Fatty” Arbuckle, Buster Keaton had earned the opportunity to headline his own series of two-reel comedies. The very moment at which he emerged as a star of his own shorts, Keaton was recruited to appear in his first feature film, The Saphead, based on a popular stage play.

Keaton stars as Bertie Van Alstyne, the pampered son of a powerful Wall Street financier (William H. Crane). Having known no other lifestyle but privilege, he wanders through a variety of misadventures—an attempt at courtship, a trip to an illegal gambling den, and a tumble onto the floor of the Stock Exchange—oblivious to the obstacles that stand before him.

Though Keaton was not the primary creative force behind The Saphead, as he was on his short films, it became hugely important in shaping his on-screen persona: the lonely, stone-faced man thwarted by circumstance, inept at the art of romance, yet undaunted in his struggle for love within a chaotic world.

The Masters of Cinema is proud to present yet another Keaton masterpiece in its UK debut on Blu-ray, from a stunning restoration completed in 2020 by the Cohen Film Collection.

The Scribe (1966, dir. John Sebert) [29 mins] – In his last film role—produced to promote Construction site safety—Keaton plays a janitor who in his attempt to educate workers on safe practices, causes more accidents than he prevents

A collector’s booklet featuring new essays by journalist Philip Kemp and film writer Imogen Sara Smith, as well as an appreciation of The Saphead by film writer Eileen Whitfield