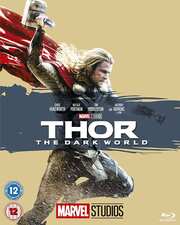 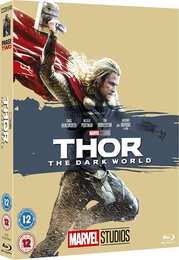 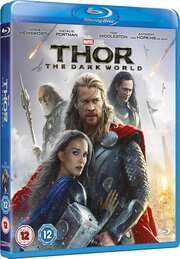 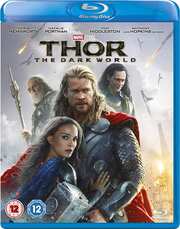 Review for Thor: The Dark World

When I got it into my head to go all-in on the Marvel Cinematic Universe, I knew full well that I would have to take the good with the bad, but that doesn’t account for the dread that I have approaching Thor: The Dark World. What I saw of Thor in the Avengers movies and Thor Ragnarok really endeared me to the goofball deity. I subsequently sought out the first two Thor films, and while the first one was pretty good, what little I caught of the second film during a TV viewing put the fear of Odin into me. Now that I come to the Blu-ray, I have to actually sit through the whole thing, and give it my full attention. This may just be the worst entry in the MCU...

Ever since her encounter with Thor, Jane Foster has had a personal motivation to continue her research, and it’s the spectre of strange astrophysical phenomena that has her working in London. She wasn’t expecting to be pulled into another world, infected by a strange alien weapon, and thrust into a war older than time itself. It was Thor’s grandfather who defeated the Dark Elves, but they’ve spent their time in exile, nursing their vengeance and plotting to return the universe to darkness, destroying Asgard in the process. And Jane Foster will be the key to that revenge, as Thor arrives to take her to Asgard in the hope of freeing her from the weapon of the Dark Elves, the Aether. As the Dark Elves attack, and tragedy strikes Asgard, Thor will have to turn to his enemy for hope.

Thor: The Dark World gets a 2.40:1 widescreen 1080p transfer with the choice between DTS-HD MA 7.1 Surround English, DTS 5.1 Spanish, and DD 2.0 English Audio Descriptive with subtitles in English, Spanish and Portuguese. There’s nothing to complain about here, unless it’s egregious use of CGI, and an overdose of greenscreen apparent in the behind the scenes featurettes. The image is clear and sharp, detail levels are good, and colours are rich and consistent. The audio represents the action with impact and immersion, while keeping the dialogue clear throughout.

It’s a sign of this film’s unpopularity that the copy I bought this year was still packaged in an actual Amaray case, and it had the o-card slipcover still. Most older Marvel titles are being reprinted at this point, and packed in newer BD cases, without slipcovers. On the disc you’ll find the following extras.

The Dark World really isn’t good; it’s not good at all. When the film’s big action sequence at the end of the second act puts me to sleep, then I know there are problems. I thought it could be something as simple as having much of the story taking place in a fantasy realm, as opposed to the ‘real’ world, losing the grounding that makes it easier to relate to a comic book movie, but then I recall the aforementioned Thor Ragnarok, and the two Guardians of the Galaxy movies, and that’s obviously not the case. I think the real reason is that the characters are really hard done by in this film, with a script that merely goes through the motions while pursuing its unsatisfying narrative.

You get a prologue to the film that sets everything up, the battle between Asgard and the Dark Elves and how it concluded, putting into place the seeds of the conflict that unfolds in this film. Alas, it does hardly anything to invest the audience in Asgard (the good guys), or really establish the villainy of the Dark Elves beyond a few soundbite platitudes for motivation. It also completely wastes Christopher Eccleston as Malekith, the head elf, buried under make-up, speaking a made-up language for much of the duration, and his distinctive voice lost under digital manipulation and distortion.

That should leave the relationship between Thor and Jane to carry the film, after all, that was at the heart of the first film, and the story makes much of Thor sacrificing his birthright to save his love. Except that the characters can’t find the chemistry they had in the first film, not helped by effectively separating them for much of the second act. And truly, for me when the film is off Earth, focusing on the story unfolding in Asgard, I really can’t engage with the film. It’s like a great big CGI Lord of the Rings battle, impersonal and detached. It’s only the final act that snatches my attention. And unsurprisingly, it’s the bit that’s set in London, where you have the incongruity of these super-powered characters having a big battle in Greenwich of all places. It allows for the culture clash comedy again, and also allows the endearing goofball side of the Thor character to come to the forefront once more.

In the end, a third act that works doesn’t excuse the first two-thirds of the film. It’s a chore to watch, and other than a handful of character beats, and its place in the greater MCU continuity, it could be considered disposable. One saving grace is that the runtime is a smidge shorter than the average MCU movie. I’ve still got The Eternals on my to-watch pile, and that’s over 2½ hours. Thankfully The Dark World is ten minutes shy of 2 hours, although given how much I slept through and had to re-watch, I still spent close to 3 hours with this film.