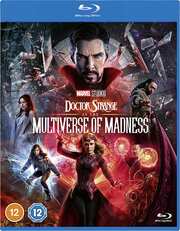 Doctor Strange in the Multiverse of Madness (Blu-ray Details) 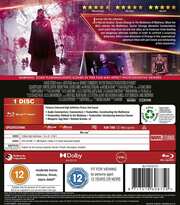 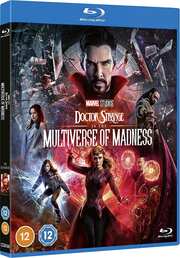 Review for Doctor Strange in the Multiverse of Madness

Could the Marvel Cinematic Universe be going off the boil? After ten years and over 20 films, plus TV series, we could be approaching that dreaded catchphrase... franchise fatigue. After all, the third phase of the MCU concluded with two of the biggest event movies of all time, Avengers Infinity War and Endgame. Anything following that will be anticlimactic. But with Phase 4 of the MCU just one film away from concluding, things haven’t been all that great, with only Spider-man No Way Home hitting it out of the park.

Black Widow, Shang-Chi, and Eternals all passed under my radar as uninspiring, while critics haven’t really taken to Thor: Love and Thunder in the same way that they fell in love with Ragnarok. I will still be picking it up, simply to sate my collector’s instinct, given that I have the first three Thor films. It’s that same instinct that got me buying Doctor Strange in the Multiverse of Madness on the week of release (The Doctor Strange disc would look lonely all by itself). Although given Spider-man: No Way Home, and Spider-man into the Spider-verse have shown Marvel’s multiverse mojo at its best, and also given that this year we’ve had Everything Everywhere All At Once getting cinema audiences’ multiverse juices flowing, this film may feel a little superfluous...

Seeing yourself trying to kill a girl, rather than let her fall into the hands of evil, could be considered a spine-chilling nightmare, but the real world is just as awkward for Doctor Stephen Strange, having to attend the wedding of Christine Palmer... to someone else. And then the wedding is interrupted by a giant invisible demon octopus thing attacking the city. In the process of fighting the demon, Strange winds up saving the girl from his dreams. Only it wasn’t a dream, it was a window into another universe, the life of another self, as all dreams are. For the girl, America Chavez is from another universe, and has the ability to create portals to other realities, although she can’t control it. And the demons are being sent by someone who wants to take her power. The demons are magical in nature, and Strange can think of only one person to ask for help. And that’s the last person that he should look to...

Doctor Strange in the Multiverse of Madness gets a 2.39:1 widescreen 1080p transfer on this disc, with the choice between DTS-HD MA 7.1 Surround English, Dolby Digital 2.0 Stereo English Audio Descriptive, Dolby Digital+ 7.1 Surround French and German, with subtitles in these languages and Dutch, Danish, Finnish, Norwegian, and Swedish. Again, there are no nits to pick with a modern, high budget movie getting the HD treatment, although in this case, the UHD offering might be better for more than just the technical reasons. The image is clear and sharp, detail levels are excellent, and colours are rich and consistent. The audio does what it needs to get the action across, and immerse the viewer in the experience. The dialogue is clear for the most part, and Danny Elfman teams up with director Sam Raimi once more to give a suitably emotive music soundtrack.

Here’s another reason why you might want the UHD (which comes with this BD disc as well). The Blu-ray release comes in a thin BD Amaray style case, pretty vanilla, as Disney look to offer punters less for the same money. The UHD release is in a standard BD sized case, and it still comes with an o-card slipcover, if you had some foolish idea about maintaining consistency on your BD shelves. The disc boots to a static menu, and on it you’ll find the following extras.

For multiverse antics in the Marvel Cinematic Universe or near locations, better to the stick with the 2 Spider-man features I mentioned before; Spider-man into the Spider-verse, which makes excellent use of the concept to tell a great story, or Spider-man No Way Home, which has the sense of an epic, and really delivers a lot of heart with its story. Doctor Strange in the Multiverse of Madness can’t match either of those films, although what we do get is a nice, entertaining, summer blockbuster comic book movie, just about rising above the typical clichés of its genre to deliver something that’s memorable, if not exactly awe-inspiring. It’s fun, and sometimes fun is all you need from a film like this.

The multiverse, for those who’ve avoided genre entertainment for the last twenty years, is the idea of an infinite number of universes, which allow every twist of fate, every choice not made, every road not taken to exist in parallel, the entertaining conceit being that it be possible to travel between these universes and experience these missed opportunities for oneself, including meeting alternate selves. This film takes that idea one step further with the thought that our dreams are windows into these parallel realities.

That’s where the story begins with the hero of the piece, Doctor Strange experiencing a dream of a self who doesn’t act heroically, choosing to sacrifice his charge rather than let her fall into the enemy’s hands. Luckily for America Chavez, he fails, and her uncontrollable power activates, punching a hole in reality and sending her to ‘this’ world, where Strange has to rescue her from a giant, demonic invisible octopus thing on the loose in New York. Given America’s previous experiences, it’s a little difficult for her to trust Strange straight off the bat, but he tries to do right by her, looking to his friends for help. Only it turns out that one of those friends is actually the enemy that has orchestrated all this, and wants to take America’s power, killing her in the process. 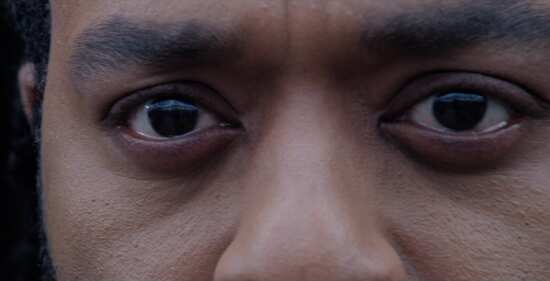 Apparently this all makes sense if you’ve seen the Wandavision series, but I haven’t, and trying to understand the villain’s motivation in the film, it didn’t quite work for me. Grief can be a powerful motivation, but causing someone to lose their moral centre in the way that it happens in Multiverse of Madness just didn’t jibe with the cause of that grief. So what’s left is a enjoyable romp through alternate realities (naturally there is an evil Doctor Strange in there somewhere), but the main alternate world, what looks like a peaceful utopia, allows the fan-w***iness of the plot to max out, with a cameo from the X-Men universe merely the cherry on the top.

I don’t know what it is with me, and Doctor Strange’s part in the MCU. I love comic books, the sci-fi side of it is great, robots, aliens with superpowers, radioactive spiders, gamma rays on the loose, a world full of mutants, and I have no issue with mythical aspects thrown in, various pantheons of gods and the like, but when things get mystical, all magic, runes, witches and warlocks, it never feels to me as if it fits in the universe; yet here we are, with Doctor Strange standing side-by-side with Thor, Spider-man, Iron Man and the like.

Doctor Strange in the Multiverse of Madness missed a chance at greatness, and couldn’t match the two superlative Spider-man multiverse stories. It has its flaws, but it still manages to deliver a fleeting piece of entertainment, with Sam Raimi getting a story with enough in the way of horror elements (including a zombie) to stamp his directorial signature on the film. Judging by the quality of the packaging, Disney are cutting corners, but it’s worth taking a couple of hours out of your day to enjoy.