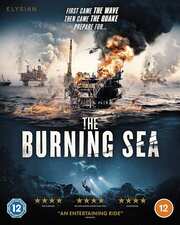 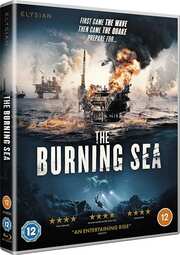 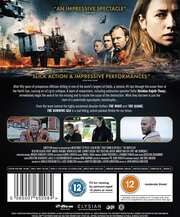 Review for The Burning Sea

There’s nothing like a good disaster movie. Every once in a while, I just like to sit down in front of two hours plus of destruction, mayhem, plucky survivors battling against the odds, soap opera life stories taking place against the end of the world, and that one, cute dog that survives to the end of the movie. It’s fun to see an effects budget immolated on expensive models and amazing CGI, lone heroes preaching the truth to disbelieving sceptics, and the bureaucrats that insist that nothing is wrong in the face of mounting evidence to the contrary. “There will never be an earthquake here, meteors are a one in a trillion occurrence, the beaches are perfectly safe for the holiday weekend...”

However, it must be said that watch too many of them, and the clichés and the tropes all tend to blur into one, and there comes a point where you’ve seen all of the disaster movies that Hollywood ever conjured up, and now that they’re making films like Sharknado, they’ve scraped through the bottom of the barrel, the concrete, the foundations, the soil beneath that, through the bedrock, and are well on the way to the magma that lies deep beneath. Thankfully, other countries like disaster movies too, and they make them as well. The Burning Sea is my first Norwegian disaster movie. Actually it’s my first Norwegian movie full stop.

Sofia works in a robotics research lab, creating undersea devices for use with Norway’s offshore oil industry. Her work is needed when an oil platform vanishes under the waves, and her robot is needed to search for survivors in air pockets in the stricken rig. But it’s no mere subsidence that has caused the rig to sink, and she discovers something a lot more worrying in the data that her robot gathers. She takes it to the client that employed her, but her warning falls on deaf ears, and in retrospect, maybe she shouldn’t have signed an NDA before accepting the job. For her boyfriend Stian is an oil rig worker, and he’s the last man left on another rig when the inevitable happens. Trapped on a sunken rig, his only hope is Sofia and her robot.

The disc boots to an animated menu, and there are no extras on the disc at all. The film is presented in 2.40:1 widescreen 1080p, and you have the choice between DTS-HD MA 5.1 Surround English and Norwegian, and a PCM 2.0 Stereo Norwegian track, with optional translated English subtitles and a signs only track to translate the onscreen text captions (de rigueur in a disaster movie). The image is clear and sharp, with good detail, and sturdy visual effects for the disaster sequences. The thing is that it looks to be a digitally shot film, and has that oft-seen issue with contrast. Things aren’t so clear and everything feels grey in darker scenes, while brighter scenes are properly detailed and rich. The audio is fine, nice and immersive, offering some decent reverb for when things start exploding and collapsing. I wouldn’t recommend the English dub to anyone, and the subtitles for the original language are accurately timed and free of typos. Alas, I kept being reminded of a Bill Bailey comedy bit regarding Scandinavian crime dramas during the film, which was a bit of a distraction.

The Burning Sea is nothing like a good disaster movie. Tell me you didn’t see that punchline coming when you started reading this review four paragraphs ago. It’s a competently enough put together tale, a nice bit of drama, some edge of the seat moments, a bit of on screen CGI destruction, all rather underplayed and indeed undersold. The Burning Sea isn’t a film to tease you towards the edge of your seat or get your blood pumping. It’s also something of a polemic against the off-shore oil industry, although coming in 2021 when this film was made, it’s a case of fixing the garage door after the Humvee has torn up the tarmac.

One thing I expect from a disaster movie is mass destruction and indeed mayhem. It’s not a decent disaster flick if some landmark doesn’t get demolished, but in The Burning Sea the action takes place off shore, and the only architectural colossi that fall are anonymous oil rigs. The second thing is that this isn’t a world, or a nation, or even a city that needs saving, it’s just one man, left behind on an oil rig, not exactly the highest stakes for viewers to get behind. The Martian showed that this dynamic can work, given that the story evoked the Apollo 13 morbid fascination for viewers, but no one but his girlfriend and those closest to him know of Stian’s predicament in this film. There’s no sense of a world waiting with baited breath.

Then there is the hero villain dynamic, which in disaster movies is the antagonistic relationship between the boy who cries wolf when there actually is a wolf, and the foolish bureaucrat that refuses to believe. That dynamic doesn’t exist in this film. Sofia sees the danger early on, and takes it to the oil exec that hired her for the first rescue mission, William Lie. William does his job, takes her data, and passes it on to those who can analyse it and advise. Naturally he keeps her out of the loop; it’s all corporate info, and she’s not an employee. Moreover, once the information has been analysed and interpreted, he acts on it immediately to evacuate the rigs. When the disaster happens, and Stian alone is left behind, he does the maths and refuses to commit to a rescue mission, knowing that risking more lives to save just one is a foolish gamble, and he turns to be justified. Of course Sofia’s coming from an emotional perspective that the viewer is meant to relate to. It’s just one, understandable mistake, and William’s obnoxious personality that is supposed to evoke antipathy in the viewer, and in my opinion it’s not enough.

Finally there is the disaster itself, which this film is depressingly ambiguous about. Any decent Hollywood disaster will take five or ten minutes to dump some pseudo-scientific exposition so the viewer knows what is happening and why. Whether it’s a meteor heading for Earth, climate change causing a shift in sea currents, a giant radioactive lizard on the loose in the city, you’re never left scratching your head as to why. But in the Burning Sea, I really didn’t know what was going on, beyond ‘oil industry bad, nature good’ It’s actually unclear as to whether all the drilling causes the sea bed to collapse, taking the rigs with it, or whether the area is prehistorically prone to natural subsidence. If the writers can’t care enough to explain, why should the audience care enough to be invested?

The Burning Sea is a disaster movie that doesn’t invest enough to sell its story or its characters, and neither will you invest enough to enjoy the experience. It’s a literally and figuratively dull movie, wholly mediocre, and you won’t remember enough of it to begin with for it to approach being forgettable.