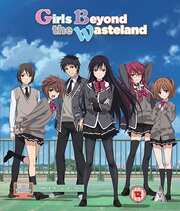 Review for Girls Beyond The Wasteland: Complete Collection

I’ve double dipped quite a few MVM titles from DVD to Blu-ray recently, thanks in no small part to some end of line clearance offers. These were prices that made even mediocre titles attractive to re-watch on Blu-ray. Just to let you know that I’m re-watching the shows in chronological re-watch order, not in order of quality, otherwise you might be wondering if I’m scraping the bottom of the barrel in terms of the anime I’m upgrading to HD. The last time I watched Girls Beyond the Wasteland was in 2017. Surely 5 years is enough to forget a show sufficiently enough for a re-watch to be akin to a first time watch. I’ll have forgotten enough about Girls Beyond the Wasteland to approach the Blu-rays in a fresh frame of mind, and maybe I’ll get more out of the show than I did when I watched it on DVD. 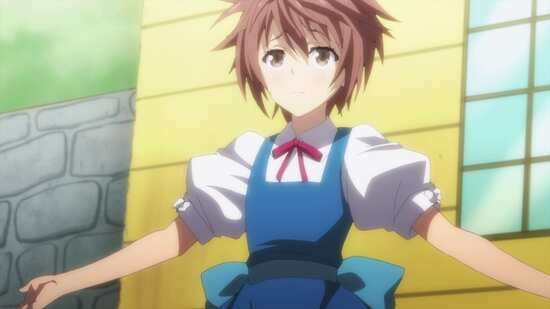 Buntarou Hojo is a popular, hard-working high school student, but with one problem. He has no idea what he wants to be, no ambition whatsoever. He’ll give anything a try though, and it’s the script he wrote for the drama club that has caught the attention of Sayuki Kuroda. She wants to create a videogame, a dating simulation, and she wants Buntarou to write the script for the game. Buntarou doesn’t know much about ‘gal’ games, but he does know that they’ll need more than just a script-writer; they’ll need a programmer, an artist, voice actors and more. This is going to be more than just another after-school club... 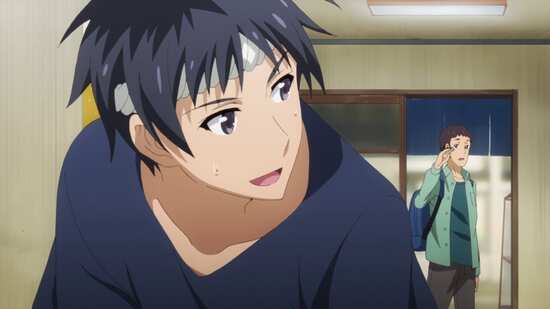 12 episodes of Girls Beyond the Wasteland are presented across two Blu-ray discs from MVM.

Disc 1
1. Girls Who Chase After Their Dreams
2. This is Another Spring of Youth
3. It’s the First Time
4. A Melody of Selfishness and Subtraction
5. What You Can See in the Storm
6. This is the So-Called Fanservice Episode
7. As Always, It’s a Different You
8. Shut Away in Summer
9. Because I Love You

Disc 2
10. Typhoon Attack
11. This Might Be the Beginning
12. Girls Beyond the Wasteland 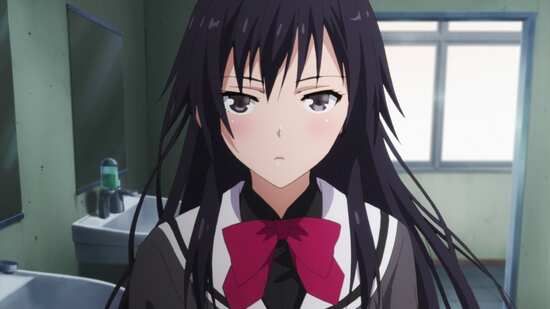 Girls Beyond the Wasteland gets a 1.78:1 widescreen 1080p transfer on these discs. It’s a nice, clear transfer, no signs of visible compression, although this isn’t the most animated of shows, but it is a clear upgrade over the DVD, with greater clarity, sharper line art, and richer colours as you would expect. Most of the effort appears to have gone into the backgrounds, which are detailed, and can be quite atmospheric at times. The character designs are appealing and expressed with a suitable degree of consistency, although with this being a mostly dialogue heavy show, elaborate animation isn’t its strong suit. The Blu-ray is well worth getting if you’re a fan of the show. 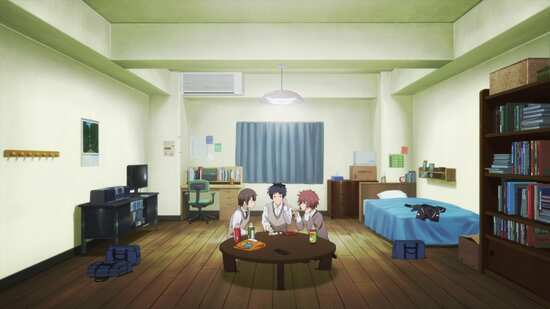 The sole audio track on offer here is the DTS-HD MA 2.0 Stereo Japanese track, and the subtitles are locked during playback. I quite like the Japanese audio, with some appealing voices given to the characters, enriching them beyond their usual stereotypes. The music for the show is rather forgettable though. The subtitles are timed accurately and are free of typos, while the stereo does enough to give the show a sense of space. 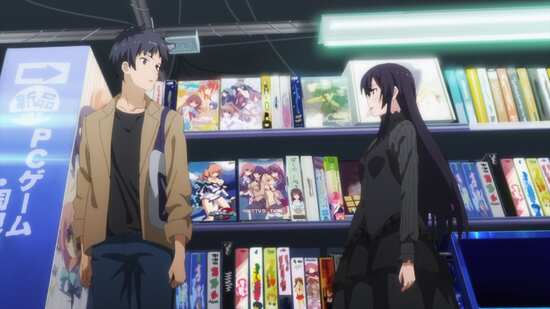 You get 2 discs held on each inner face of a two disc Amaray. 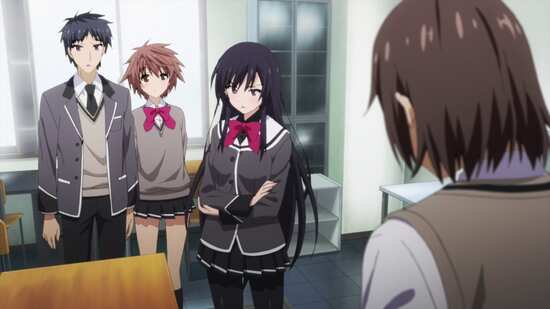 Here’s an unfortunate truth. If you’ve seen Welcome to the N.H.K., also available from MVM, then Girls Beyond the Wasteland will be a non-starter. Girls Beyond the Wasteland is all about a bunch of high school students that come together to make a dating simulation, a video-game. That’s also a small element of the plot in Welcome to the N.H.K., but the dark anime satire just kills it. It takes its game-making plot in a nihilistic and depressing journey; it actually looks at what these dating simulations are for, and also at the mindset of those who make them. It’s not a pretty sight, but once you’ve seen it, it tends to put the kybosh on any more prosaic attempt to cover the subject. 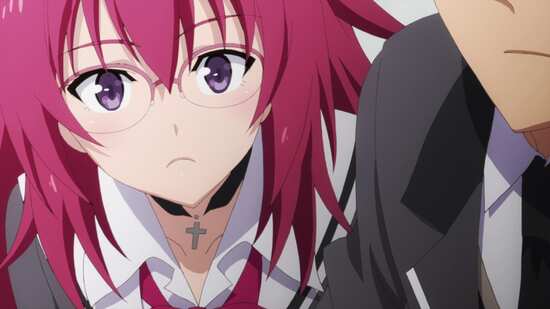 Girls Beyond the Wasteland is nothing if not prosaic. It dresses its game creators in the tried and trusted genre of the after-school club. It sets up a harem around its central male character, and there are plenty of personality clashes to resolve, as well as a bit of unrequited love too. There is the requisite beach/hot springs episode, and it all unfolds in a predictable and unchallenging way. It isn’t until the final few episodes that the story takes a turn for the interesting, offering something a little unexpected, but when it comes to originality and grabbing the viewers’ attention, Girls Beyond the Wasteland never gets out of first gear. 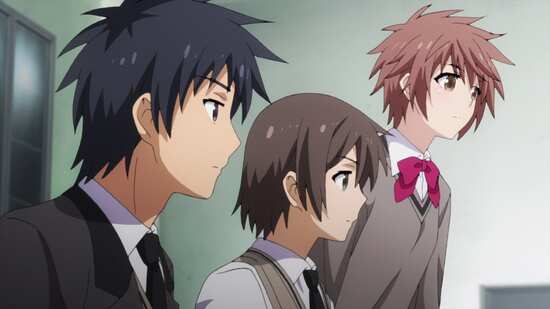 But sometimes, living life in the anime slow-lane isn’t a bad thing if the show is entertaining. Girls Beyond the Wasteland’s story might be predictable, its characters familiar, but it delivers when it comes to entertainment. It might be comfortable, recognizable, and conventional entertainment, but it’s entertainment nevertheless. The show ticks along at a nice pace, delivering on the humour, and the odd moments of character drama, doing just enough to get you invested in the characters and whether things turn out right for them. 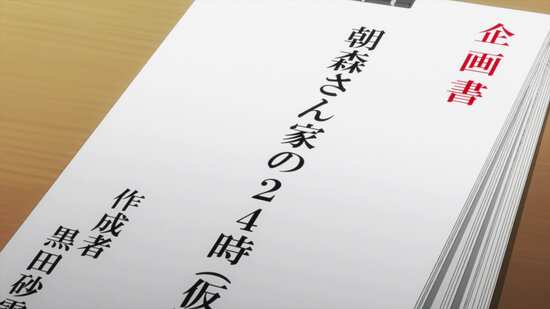 Girls Beyond the Wasteland is not about the gal-games, it’s about the group making the game, and the interpersonal dynamics between them. The main character is Bunta, a high school student with no particular ambition. He’s likable, popular, and a jack of all trades. One string to his bow is writing, and it’s a script that he wrote for the drama club and his childhood friend Yuka in particular that gets the attention of Sayuki Kuroda. She’s the oddball girl, pretty and elegant, but unconventional, not least in how she comes on to Bunta, ostensibly inviting him on a date to an amusement park, to judge his reactions to a romantic situation, but only to audition him as a scriptwriter for the game she wants to make. 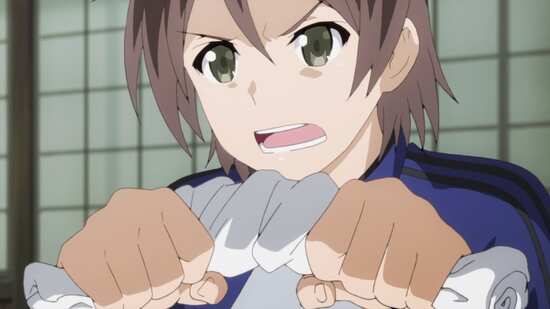 A producer and a scriptwriter aren’t enough of course, and Yuka tags along as a voice actress for the game. Bunta’s other friend Atomu also joins the group as an administrator, someone to keep the schedule in check, keep things organised and the game on track. Atomu’s defining characteristic, beyond being a nice guy, is an abysmal track record with girls, easily triggered into depression. The game needs an artist of course, and the shy and unconfident Yuki practically gets shanghaied into the group, and of course they need a coder to program the thing, which is where Ando comes in. The red-haired girl is a full-on boys-love fanatic, has a brash and outgoing personality, and an antipathy to Kuroda. The creative differences in the group always begin with those two, with Ando quitting the group more than once as they try to get the game off the ground. 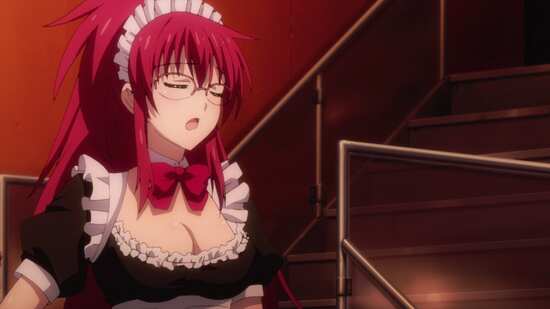 It takes a couple of episodes for the group to come together, before the training camp cliché. Bunta hits writer’s block, Yuki threatens to overwork herself sick, Ando keeps annoying Kuroda, but it isn’t until the swimsuit episode that the group are really on the same page when it comes to the game. The second half of the show then tends to rely more on external conflict and pressures, the timetable of the game’s production beginning to press, and the appearance of a rival game production company. There’s a bit of unrequited love in the group that caused problems. For a group with two boys in, the girls tend to gravitate towards Bunta rather than poor, lovelorn Atomu. But it isn’t until the penultimate episode that they face their greatest hurdle, when the truth behind Kuroda’s desire to make a game gets out. 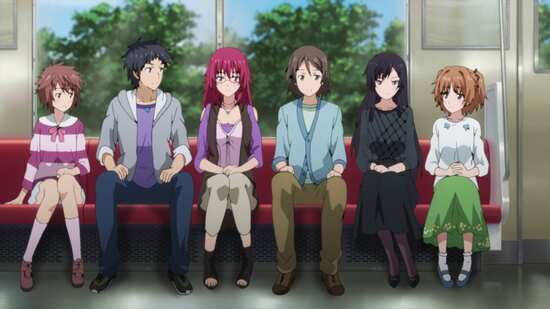 It’s when the interpersonal dramas and issues are at the most tense that the show gets good. There’s practically no sense of the game that they’re making, beyond a snippet of script, and some of Yuki’s artwork, so you don’t really get invested in whether they make it on schedule, or if it’s any good. But you do get invested in the group, to see if they can work through their issues and continue working together. As a result, Girls Beyond the Wasteland is at its strongest in the final half of the show, whereas the first half can be somewhat predictable, and even tedious. It’s a fairly run of the mill show, but a decent way to kill a few hours. 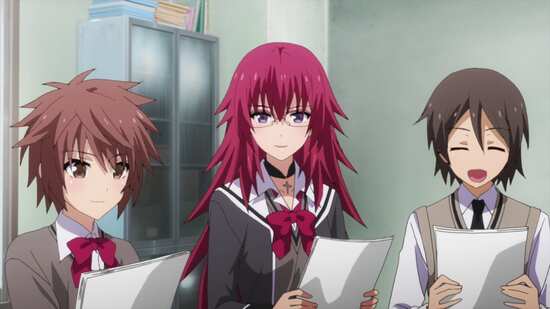 No Damascene conversion with my second viewing of the show, although naturally I appreciated the HD format’s advantages over Madman’s DVDs. However I also got a greater clarity as to what doesn’t sit well with me with Girls Beyond the Wasteland, and it boils down to the characters. It has a good premise and it translates that into a fair narrative (there are plenty of shows like Shirobako and New Game that do more justice to the creative process). But the fact is that I just don’t care about the characters in Girls Beyond The Wasteland. The show leaves them as archetypes and thin ciphers. It fails to develop them, and neither does it plot any significant character arcs for the audience to hook onto, not until the final two episodes, by which time it’s too late.