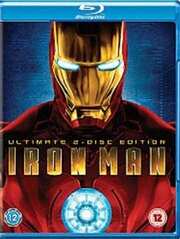 I don’t like Iron Man as a character. I rationalise it by saying that he’s no superhero; superheroes by definition have superpowers, and Tony Stark’s only superpower is money. He’s a multi-billionaire with access to cutting edge technology and engineering, coincidentally an inventive genius, who lost his parents at a tragically young age, and who now goes off, fighting crime and villainy wearing the ultimate high tech suit, supported by all manner of gadgetry. Did I mention how much I like Batman? My complaints about Iron Man obviously don’t hold up to much scrutiny, and what little I have seen of the Robert Downey Jr. screen incarnation has been entertaining enough. But now that I have finally, belatedly been bitten by the MCU bug, I have to bite the bullet in turn and watch the Iron Man movies. Once again, I bought the trilogy boxset, but as they merely gather the three single releases into a thin card slipcase, I’ll review them individually.

Incidentally, the reason I finally dove into the MCU was the impression I had that Disney were taking the titles out of print, and some movies were getting hard to find in the UK. There was no such issue with this trilogy, and seeing the horrible Elite cases instead of the older Amaray cases, it’s clear that the MCU movies have recently had a new print run, and I may have been premature in my dire warnings of Blu-ray scarcity.

Stark Industries sells weapons, and Tony Stark invents the weapons that keep the free world safe. And he has the charisma to sell them, and the appetites to appreciate the rewards that he is due. Selling the latest ‘Mother of all Missiles” in Afghanistan is a bad idea though, when his convoy is attacked, and he’s kidnapped by terrorists, demanding that he makes an ultimate weapon for them; not easy when the attack lodges a piece of shrapnel close to his heart. His life is saved by a fellow captive, a surgeon who wires a car battery to an electromagnet to keep the shrapnel from killing him. Tony’s first plan is to miniaturise one of his ‘failed’ inventions, an ARC Reactor to power the electromagnet. And that reactor has enough surplus power to run another invention... a powered and armoured suit.

His experiences in captivity prove to be a Damascene conversion, and when he returns home, he wants to shut the weapons side of his business down, no longer sell death to the world. Besides, he has a new invention to perfect, a means to atone for his past. But there are those who want Stark Industries to remain in the weapons business, and will do whatever it takes to make that happen.

Iron Man gets a 2.40:1 widescreen 1080p transfer and the choice between Dolby TrueHD 5.1 Surround English, and DD 5.1 Surround Italian, with subtitles in English, Italian, Danish, Dutch, Finnish, Greek, Hungarian, Norwegian, Polish, Portuguese, Swedish and Turkish. It’s a decent enough transfer, clear and sharp, making the most of the action and the special effects sequences. Given that this was the first MCU movie, it certainly looks as if got the big budget treatment, and no corners were cut. The audio too hits all the right spots when it comes to action and effects, but you’ll have to turn the volume up a tad to make the most of it, and even then, this is a film with a couple of mumbly actors, which makes you thankful for the subtitles. But an action movie from 2008..? Orange and teal abounds.

You get one disc in a BD Amaray style case, and the disc boots to an animated menu. You’ll also find the following extras.

I’m still not sure why I dislike the character of Iron Man, but watching this film again did nothing to change my opinion. That’s despite Robert Downey Jr.’s charismatic performance really defining the character, and certainly explaining why the MCU became a thing, instead of fizzling out like DC’s effort. This is a fun movie with interesting, and engaging characters, a decent origin story, and no little action. But it doesn’t feel like a superhero film, and for the reason I mentioned previously. This isn’t about people with superpowers, rather people with access to really cool technology, more Knight Rider than The Dark Knight.

What makes it interesting is the journey that Tony Stark goes on, or rather the ordeal he has to endure, a playboy billionaire getting richer off his inventions and the arms trade, given a harsh dose of reality when his abduction brings him face to face with the effects his weapons have on the world, and the realisation that the world isn’t the simple good guys versus bad buys paradigm that his company has been selling, Worse it seems that his company has been profiting from both sides, as all self-respecting arms dealers are wont to do. His return to civilisation prompts a change in his personality, a sudden desire to atone for his sins, but that is a direction that many in his company do not wish to take. It’s a good thing he invented a powered suit of armour with a miniaturised energy source while in captivity.

Iron Man has a good story, and it deftly plants the seeds that will expand into the larger Marvel Cinematic Universe, but for me it has one crippling flaw, and most likely a flaw that most people aren’t aware of, or choose to ignore. But every time I see the climactic battle in this movie, I’m put in mind of Robocop 2, and that is not a film to be reminded of at any time, let alone watching a film otherwise as decent as Iron Man is. The Blu-ray is good enough to watch, but the extras are disappointing, with featurettes about the Iron Man comic, not the movie.