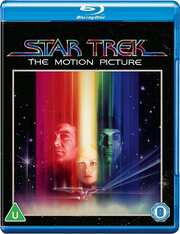 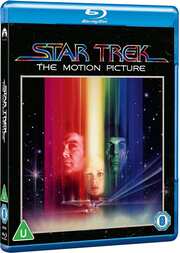 How many more times will I buy the Star Trek movies? I’m not even a Trekkie anymore, having lost my ‘boldly going’ mojo around Star Trek Voyager. I certainly have no love for the current iterations of the franchise. But I keep buying the classic films, and when it comes to Star Trek: The Motion Picture, it’s likely that I’ll be buying it once more following this release, as this year, they re-released the director’s cut version of the film, having remade the updated effects shots for 4k presentation (the first time the Director’s Cut came out was in the DVD era, and lacking any foresight, Paramount commissioned the then new effects for 480 line SD presentation.)

If you want the Theatrical Version of Star Trek: The Motion Picture, then this release is downright essential. The 2013 release of the first 10 Star Trek films on Blu-ray, in boxset forms and subsequently individually was both pleasant and a disaster. Sure it was nice to get the movies in high definition, loaded with extras. But Paramount went and put the films, especially the original cast features, through the DNR wringer, resulting in unpleasant, plastic looking, and flat transfers. It took the advent of UHD to convince Paramount to think again, and last year they got around the re-mastering, and releasing the first four films on the 4k format, and with the UHD came re-mastered Blu-rays as well. Actually, they tested the waters first with the most popular of the films, as they re-released The Wrath of Khan on Blu-ray, mastered from a 4k source back in 2016 but it was last year in 2021 that the UHDs finally arrived, alongside the new Blu-rays. You can recognise those 2021 Blu-rays as they simply use the original poster art for each film. The Wrath of Khan 2021 Blu-ray is the same disc as the 2016 release, but the other three are all new.

The historic five-year mission is over. James T. Kirk languishes at Star Fleet Command as an Admiral, Doctor McCoy is happily retired and Spock is pursuing total logic on Vulcan. The Enterprise has been redesigned and refit, and is destined for the command of Will Decker, a brash young Captain who reminds Kirk of who he used to be. All this changes when an alien cloud the size of a solar system comes into conflict with the Klingons. The Klingons are destroyed and the cloud continues on its course towards Earth. Alarmed, Starfleet orders the Enterprise to be made ready and to intercept the intruder. Kirk takes the opportunity to regain his command and displace Decker as captain of the Enterprise. Reunited with his old crew, Kirk is finally back doing what he’s best at, commanding a starship, exploring the unknown. But is he the same man he used to be? Are any of them?

The whole point of getting this release is the upgraded video transfer, and in this respect Star Trek: The Motion Picture does not disappoint. The disc presents the film with a 2.35:1 widescreen 1080p transfer, and as mentioned, mastered from the 4k source. The first thing you notice is that the grain is back where it belongs, giving the film the expected, vibrant and organic look. The image is clear and sharp, detail levels are excellent, and the film looks properly dimensioned as opposed to the flat experience that the first Blu-ray offered. Dark detail is excellent, and blacks are inky and as defined as you’d hope for. The film looks excellent, almost a new experience, especially the journey through V’Ger’s energy cloud. The Motion Picture was ever a drab film, but it does feel as if this version has had its colours retimed; certainly the palette seems lush and vibrant in a way as never before, although that might be a legacy of the HDR treatment the UHD disc will have received.

There are some superficial changes when it comes to the audio options, with Dolby TrueHD 7.1 Surround English, Dolby Digital 2.0 Surround French and German, and DD 2.0 Mono Japanese and Spanish, with subtitles in these languages and Danish, Dutch, Finnish, Norwegian and Swedish. I love the lossless audio on this disc, the Motion Picture has the most theatrical of all of the movie scores, and it really comes up a treat here. Having said that, the 7.1 Surround is overkill for the most part, with this a very front-focussed audio experience, the surrounds sparsely used for effects and ambience. The dialogue is clear throughout, but it’s another missed opportunity to offer the original theatrical audio experience.

You get 1 disc in a BD Amaray style case, wrapped in an o-card slipcover, with the aforementioned poster art. The disc boots to a static menu.

And it’s another missed opportunity here, as this disc merely repeats the extras from the 2013 release.

You get a commentary from Michael and Denise Okuda, Judith and Garfield Reeves-Stevens, and Daren Dochterman, sparse but informative.

The Library Computer pop-up trivia track is there.

In Production, you’ll find just one featurette running to 10:44 HD looking at the process of writing the movie, from first concept back in the early seventies to the final script.

You get the Trailers and the TV Spots, HD and SD respectively.

The isolated score is accessible from the set-up menu and is presented in Dolby Digital 2.0.

Including the Abrams movies, this is probably the most theatrical Star Trek has ever looked, really filling the big screen, and as far removed from its TV roots as you can get. It’s also the closest Star Trek ever got to hard sci-fi in the movie format, with a twist ending worthy of any Outer Limits episode. But those much-loved characters never come to life in this film. It’s all so dry and unemotional. You might get an odd moment of familiarity, the odd wink, the rare bit of sarcasm from McCoy, a hint of the old Kirk charm, but the camera will cut away for another lengthy effects sequence. And the theatrical version is the one that milks the effects sequences for all they are worth, ten minutes of Kirk ogling the Enterprise at the start, fifteen minutes of wandering through V’Ger’s clouds in the middle. It’s a case of the bean counters editing the movie, they had spent all this money on effects shots, and by God we were going to see it on screen.

I like the story of Star Trek The Motion Picture, it’s a nice bit of sci-fi from a franchise that usually aims for the space opera instead. But the film itself bores me each time, especially this Theatrical Cut. For pity’s sake, McCoy comes up to the bridge, twice, says nothing, then turns around and walks out again, his comments, those character interactions left on the cutting room floor. They are there in the Director’s Cut though, a version that actually works well enough to keep my eyes open for the duration. I can see why they call this the Slow Motion Picture.

Paramount set the bar when it comes to stinginess. Boutique labels like Eureka will pursue a property, and try to give it the best, the most comprehensive presentation the first time around. Paramount on the other hand, rush out a flawed product, and then fix it, gradually, one tweak and one release at a time as they know that the fans are obsessive enough to keep on buying it. At my estimation, this is the sixth time I’ve bought this film, and it’s very likely that I will buy it again if the 4k Director’s Cut ever hits Blu-ray. Star Trek: The Motion Picture is finally good enough to watch, in terms of visuals at least. There’s no fixing the story at this point.