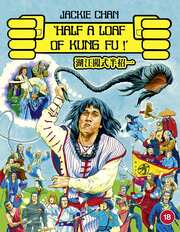 Half a Loaf of Kung Fu (Blu-ray Details) 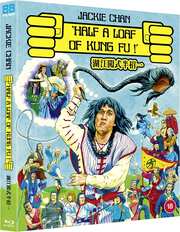 Review for Half a Loaf of Kung Fu

I have long wanted to watch Half a Loaf of Kung Fu, although not because it’s any good. I actually have no idea what this film is like, or how good it is. It’s the position that it holds in Jackie Chan’s filmography that warrants my interest. I am a big fan of the sort of kung-fu comedy that Jackie Chan became synonymous with in the 1980s. But those didn’t just appear overnight. In the seventies, Jackie Chan was another in a long line of “The next Bruce Lee” wannabes, making films like New Fist of Fury and The Hand of Death. It would take some time and effort, and the success of Golden Harvest’s Drunken Master for the Hong Kong studios to realise that they had a new brand of action movie star on their hands.

But in the seventies, Jackie Chan was contracted to the Lo Wei Motion Picture Company, whose output consisted of the traditional, rival schools, avenging fallen masters, unique martial arts style genre flicks. But somehow, Lo Wei wound up making one of the earliest kung fu comedy films, a veritable parody of the very genre that was their bread and butter; this film, Half a Loaf of Kung Fu. It’s notable that Lo Wei was so disappointed in this film where Chan had been given creative control, that the film was shelved and Chan became a free agent, able to move to Golden Harvest. When Young Master became a box office smash two years later, all that Lo Wei could do was re-release Half a Loaf of Kung Fu to cash in on the new kung-fu comedy craze.

Jiang is a layabout, a loser, whose only kung-fu talent exists in his dreams, and even then only when he eats his spinach. He makes his way through life on sheer chutzpah and an ability to blag, which gets him into trouble more often than not. When he sees a battle between a kung fu master and a villain, a battle which neither survives, he sees a way to make some easy money, if he assumes the identity of the Whip Hero, and claim the reward for the villain. But as well as assuming the reputation, he’s also got to face all the challengers who want to take down the hero. Jiang will have to learn some actual kung-fu if he wants to survive. The only help he can find is from a couple of beggars, and he’s not too certain that they are actually helping. And now that he’s a hero, he’ll have to actually be heroic.

Half a Loaf of Kung Fu gets a 2.35:1 widescreen 1080p transfer on this disc, with the choice between PCM 2.0 Mono Cantonese, Alternate Cantonese (Japanese version), Mandarin, and English dub, with optional English subtitles. Make sure you use the menu to make your choices, and get the right subtitle track to go with the right audio track. The image is pretty standard for a Fortune Star HD restoration, with a clear, sharp and colourful presentation, a little soft at times, but stable and clean. However there are some issues with the original print and source material, with a couple of burn marks and some scenes feeling overexposed, the editing not too hot. Normally I’d go for the Cantonese audio, but this is one film that should really be watched in Mandarin, especially for one particular gag. The audio is fine and clear, with no distortion or tinniness. The subtitles are accurately timed and are free of typos, although some of the profanity feels a little “Manga Video” suspect.

You get one disc in a BD Amaray style case, wrapped in an o-card slipcover. The sleeve of the case is reversible, and you’ll see those artworks once more on either side of a fold-out poster. Also in the case is a 36-page booklet with writing on the film from Matthew Edwards, alongside stills and production/promotional material.

On the disc, you’ll find an audio commentary from Mike Leeder & Arne Venema, alongside the Japanese TV Spot, and the Hong Kong, Japanese and English trailers for the film.

I don’t know why Lo Wei shelved the film, but one potential reason is obvious. It’s not very good. It’s worth having if you are a collector of Jackie Chan films just for the special place it holds in his filmography. I’ve come to love the kung fu comedies that came to epitomise 80s HK cinema, and Jackie Chan was a big part of that, channelling Buster Keaton into his insane stunts and death defying action. That didn’t appear out of nowhere; it had to be developed and evolved, and Half a Loaf of Kung Fu is an essential stepping stone on the way to Young Master. You can even see elements of that film in this. But what you won’t see here is Buster Keaton. Instead, Half a Loaf of Kung Fu channels Charlie Chaplin and Benny Hill into its goofy comedy.

I had a hard time watching Half a Loaf of Kung Fu; in the end I had to take two cracks at it on subsequent nights, the second attempt letting me make that delightful comic discovery in the Mandarin audio. The first problem is revealed in the overlong opening credits, the sense that they milk a joke until it’s dead, and it’s an issue that crops up in the film proper as well on occasion. It’s a mess of a film as well, with far too many characters, and more tellingly far too many villains, which makes the conclusion something of an incoherence.

The thing that really hits hard is that Jackie Chan isn’t that funny in this film. He’s cheeky and arrogant, and a little bit dopey, but he’s yet to develop the appealing underdog character that would make him a mainstay of HK cinema. Many of his jokes fall flat, and it’s only through the film’s pace and sheer momentum that it managed to hold my attention (the second time around). And then along comes Dean Shek as the flatulent beggar, wielding unexpected snooker-fu, and he steals the film. He’s the best thing in the movie, and it may be the best performance I’ve yet seen from him. Jackie Chan didn’t make me laugh in this film, but Dean Shek did.