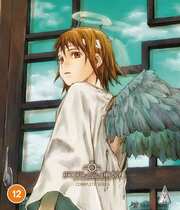 One of the most visionary and creative forces in early 2000s anime was Yoshitoshi ABe, who alongside writer Chiaki J. Konaka and producer Yasuyuki Ueda delivered four stunning, and thematically unique anime shows. But the problem is that when those shows came out, the anime industry was in the middle of that period where shows got NTSC resolutions and primitive digipaint quality. That doesn’t work too well in our HD age, not without heroic efforts on part of the studios. That sort of effort went into Serial Experiments Lain to bring it to Blu-ray, although from 1998, that show was a curious digital/cel and paint hybrid which actually translated well to HD. 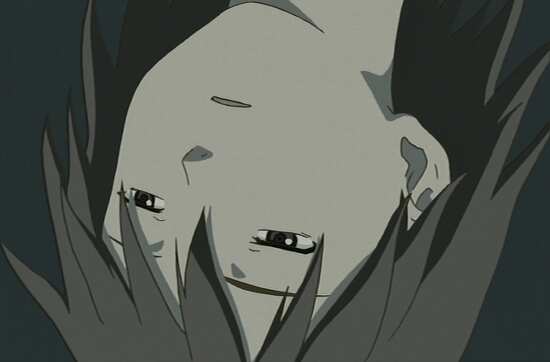 The same can’t be said for shows like Texhnolyze, NieA_7, or Haibane Renmei, although the show that I would want the most on Blu-ray, Texhnolyze, is the one show that hasn’t had an English territory HD upgrade as yet (there is one in Germany, although not Japan). NieA_7 got a Japanese release in 2015, and a US Region A locked release in 2018. And we’re now getting Haibane Renmei on Blu-ray in the UK in 2022, a few months after the US release. The problem is that the Japanese Blu-ray, upon which this release is supposedly based, came out in 2010, and Haibane Renmei is technically the weakest of the Yoshitoshi ABe shows, especially when it comes to resolution and detail. I’m somewhat ambivalent about this release. 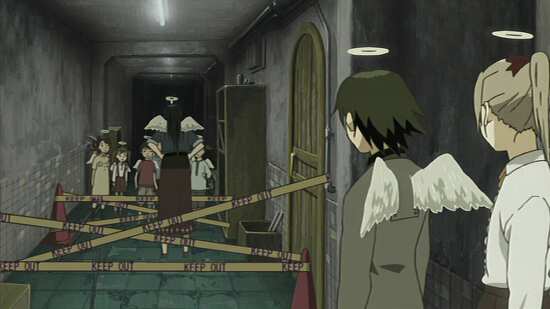 The Haibane are angelic in appearance. They are reborn, with no memory of their previous lives into a mysteriously structured society, and they do indeed have wings and haloes. Their haloes are provided by the Haibane-Renmei, a group that regulates all aspects of their existence, and they live side by side with humans in an isolated town, trading work for goods. We explore this world through the eyes of Rakka, the newest addition to the community of Haibane. 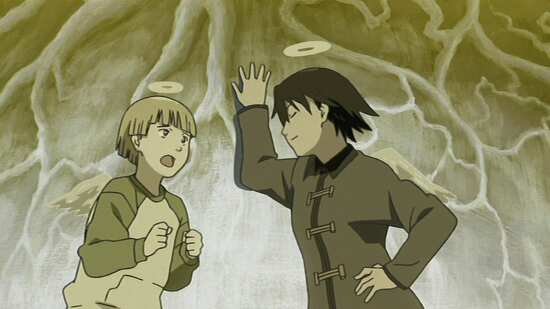 13 episodes of Haibane Renmei are presented across two Blu-rays from MVM. 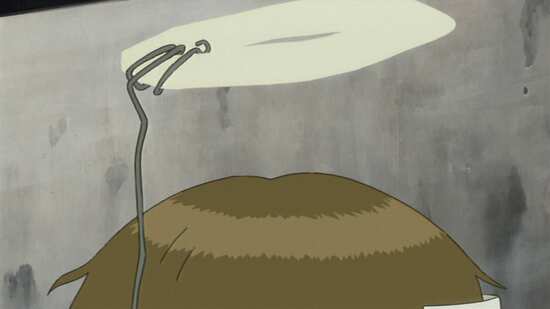 Haibane Renmei gets a 1.78:1 widescreen 1080i transfer at 60Hz. It’s not great. Haibane Renmei was never the most technically accomplished anime. Even the DVDs were soft and of low resolution, so there isn’t a lot for an upscale to work with. In the show, the animation is lush with a suitably ethereal feel to it, the palette consists mostly of pastels, and the use of light is delicately but effectively done. But dating from 2010, this is one of the early Japanese up-scales that Funimation is making use of. Back then, the tendency really was with SD shows to use filtering and edge enhancement to make them look faux HD, and that rarely worked. 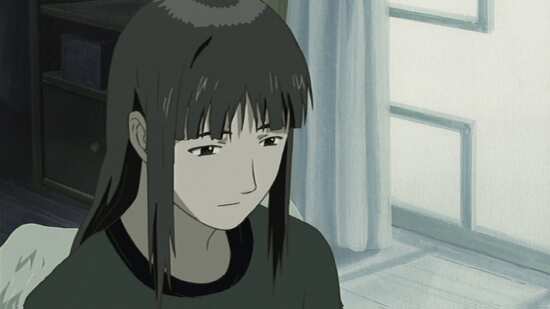 On this Blu-ray release, that DNR results in a loss of detail (there are a couple of frames where lines just vanish, including mouths) especially in shading, and the line-art is blurry and smeary when the faux-HD doesn’t work. There is also shimmer and moiré on edges during pans and scrolls. Some scenes are what I can best describe as watercolour turned into oil painting. Haibane Renmei doesn’t look good on Blu-ray, but there is a caveat. 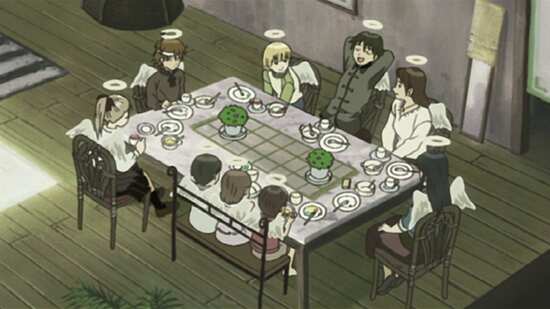 Haibane Renmei gives you the choice between Dolby TrueHD 2.0 Stereo English and Japanese with optional translated subtitles and a signs only track. Everything is clear and in order for both dialogue tracks. The incidental music suits the story well, and the theme songs are really quite special. One slight issue is missing subtitle translations, one line is missing in episode 1, and one line is missing in episode 2. The translation also seems altered/tweaked from the original DVD release, although not to the detriment of the story. Otherwise the subtitles are accurately timed and free of typos. 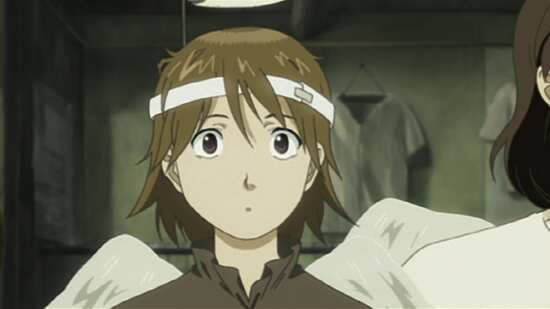 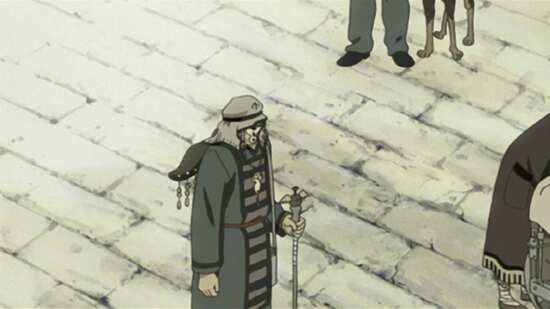 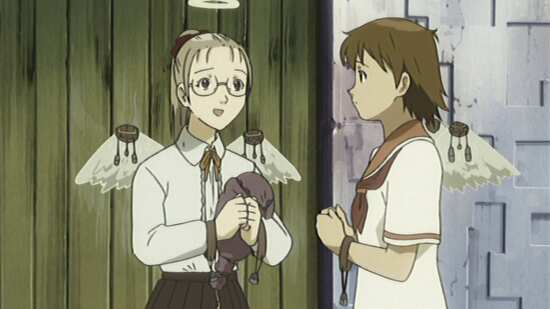 Let’s deal with the elephant in the room first. Haibane Renmei on Blu-ray does not look good. The problem is in the source material, as it was certainly not animated for HD back in 2002, and quite frankly it didn’t tax the limits of the 480i NTSC format. When you’re scaling that up to HD, you’re not left with a lot of options to make it look good, and back in 2010 when this Blu-ray upscale was created in Japan, the fashion was to create faux HD using DNR, filtering and sharpening, with little thought given to preserving the original look. 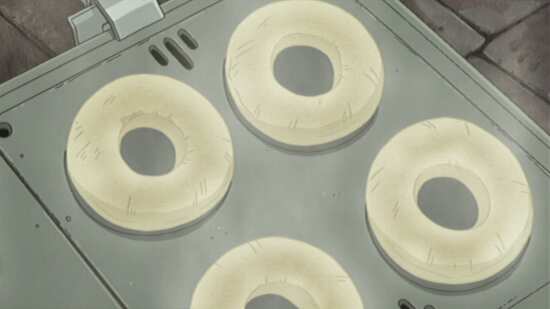 If you want Haibane Renmei, and you do want Haibane Renmei, the holy grail is the original Region 1 DVD release across 4 discs from Pioneer Entertainment a.k.a. Geneon. The NTSC transfer is as close as you can get to the original broadcast version. Failing that, you want MVM/Madman Entertainment’s first DVD release of Haibane Renmei, also across 4 DVD volumes, which has much the same content as the Geneon version, but has a NTSC-PAL standards conversion, which adds a little softness and frame blending to the transfer, although given the quality of the original source, isn’t as bad as with other DVD releases of the era. MVM repackaged the 4 disc release in 2016, and it is still available to buy at the time of writing, When Funimation picked up the Geneon licenses, they re-released Haibane Renmei on 2-disc DVD in 2012, followed thereafter by Sony Entertainment in Australia (a version that I have), and those 2 disc releases were apparently downscaled from the Japanese Blu-ray release, the very transfer on this new UK release, and it looks worse than the Blu-ray; the worst of all options. That 2-disc DVD release is to be avoided. 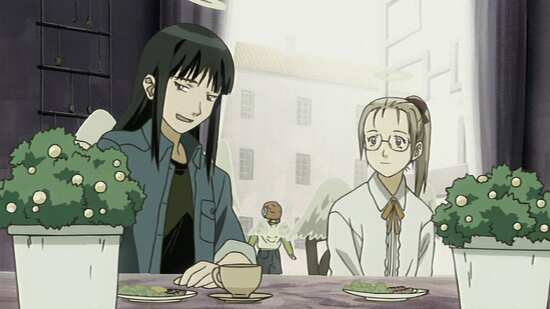 So what does this Blu-ray have to offer if the image quality isn’t quite up to snuff? Lossless audio is always a good draw, and Haibane Renmei’s music is worth the extra bitrate. Also, the original MVM/Madman 4 disc DVD release of the show missed out on a few minor extra features, some of the next episode previews and promo material, which at least now is present on this Blu-ray release. The Collector’s Edition too offers the kind of packaging and physical accoutrements that will appeal to fans. Above all, I’m also reminded of how the content can trump the medium of delivery; how when I was younger, I’d enjoy a movie on pan and scan VHS played through a 21” CRT TV just as much as watching it in a cinema. DVD isn’t going remain to in print forever, won’t continue to be manufactured, and it’s most likely that MVM 4-disc DVD release that I recommend will vanish from e-tailer inventories before these new Blu-rays, and I’d much rather own Haibane Renmei in whatever format I can get than be without it. 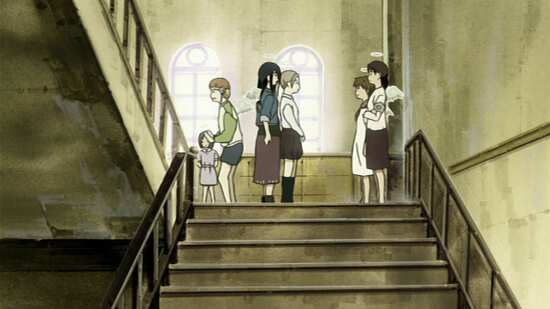 For me, Haibane Renmei is the perfect series, an amazing story with involving characters, with a powerful emotional core. You’re thrown straight into a mystery, with the opening act of the show devoted to world building. It’s told mostly from the point of view of Rakka, an apparent angelic being reborn into a strange world, with only the echoes of memories from her past life. She hatches, fully grown from a cocoon, to be welcomed into the world by other Haibane, and especially one named Reki, who explains what is happening to her, and who she now is, who she is expected to be. 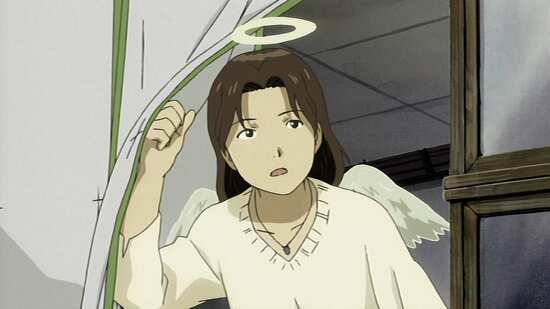 Other than the trauma of sprouting her wings, much of this introduction to this world is played lightly, especially with the nature of their halos, and how the human inhabitants of the town relate to them. Haibane are treated as exalted beings, but are also expected to live immaterially, volunteering for work and duties, but without recompense, their society built on hand-me-downs and donations from the townsfolk, and making use of a barter system. Their lives are governed by an even more mysterious society in the town, the masked Haibane Renmei, who act as spiritual guides of sorts, and dole out punishment for any infractions, such as straying too close to the wall that bounds the town. They are also the ones that communicate with the Toga, the only people allowed to cross that wall, who bring trade from outside. 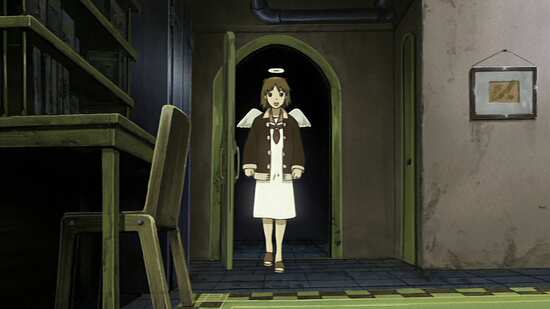 It’s those echoes of past memories that cause issues for the Haibane, and particularly with Rakka at first, as she now has no understanding why her personality is the way it is. But as the series unfolds, and the nature of the Haibane is explored, we get to understand the deep depression that overtakes her, as we learn the ultimate life-cycle of the Haibane in this world. And in the final third of the show, we realise that she isn’t alone in this. She has to apply what she learns about herself to help someone else in need. 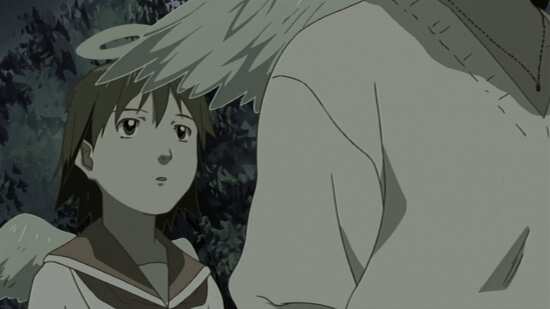 I’m trying not to spoil what’s so good about the show, as it’s really worth discovering for yourself, but the way the world-building slice-of-life shifts into emotive character drama is very effectively done. It’s all bright, shiny and ethereal to begin with, but by the time the character arcs take a turn for the dark, the nature of the Haibane revealed, you’ll be so drawn into the story that you’ll be hanging on every word, hooked to each episode. 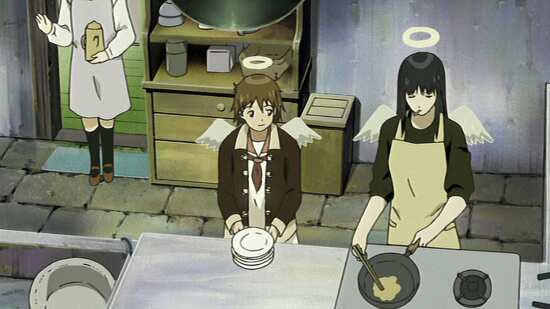 Personally, I’d go for the DVD release, but this is a show that should be in every anime collection. The Blu-ray doesn’t look great, but it is watchable, and the show matters so much more than the medium it’s on. There will come a point where the only option for Haibane Renmei available will be this Blu-ray release. If I had no other choice, I would definitely buy it.