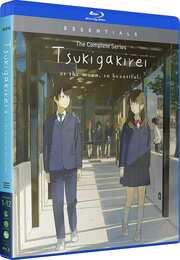 Review for Tsukigakirei: The Complete Series

Last year, I grabbed three Funimation titles from the US on import, titles that most likely will never be released in the UK, despite it all being one, big happy Funimation company now. Funimation UK continues to concentrate on the mass market appealing titles that Manga released before they were bought out. Three titles, three genres that you will rarely see from Funimation UK, all certainly make you wonder at just what we’re missing out on. I recently reviewed a fantasy slice of life show in Konohana Kitan, I have a straight up drama to look forward to, and there’s this show, Tsukigakirei, a sweet middle school romance. 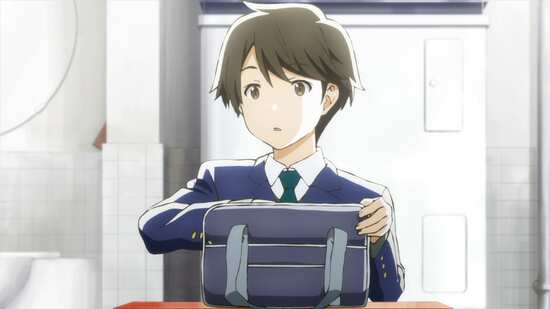 Akane Mizuno is in the school athletics club, and excels on the track. Kotarou Azumi is in the school literature club, with ambitions to be published professionally. As the third year of middle school begins, they’re placed in the same class for the first time. This year it seems that everyone is pairing up, but not only are Akane and Kotarou from two different worlds, they’re also both painfully shy. An awkward relationship is on the cards. 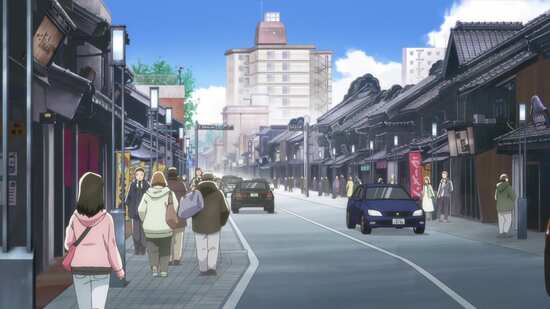 Twelve episodes of Tsukigakirei are presented on these two Blu-ray discs, imported from Funimation in the US. 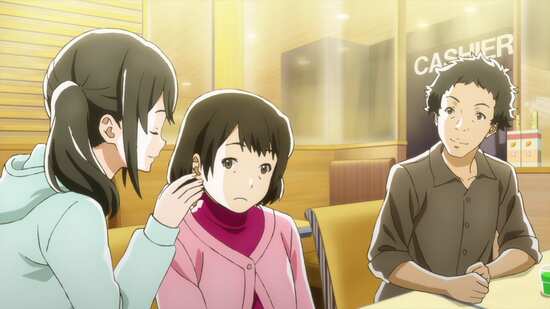 Tsukigakirei gets a 1.78:1 widescreen 1080p transfer. It’s an excellent transfer on these discs, clear and sharp, and with rich and consistent colours. The animation is smooth, and there are no issues with compression, aliasing or the like. It’s a bright, vivid animation, so there isn’t much opportunity for banding. The character designs are generic in style, but individually memorable. The animation opts for a softer palette of colours and with the prevalence of white highlights on the characters, gains a watercolour feel. The animation is detailed, and driven by character, with high frame rates, while the background settings approach photoreal at times. This love story is heavily inspired by the Makoto Shinkai movies, and while it doesn’t play with light in exactly the same way, it does have a similar feel. 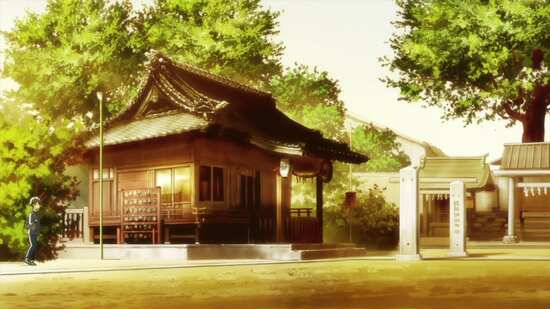 You have the choice between Dolby TrueHD 5.1 Surround English and 2.0 Stereo Japanese, with translated English subtitles and signs locked during playback. I was happy with the Japanese audio with the actors suited well to their roles. The dialogue is clear and the subtitles accurately timed and free of typos. Naturally this isn’t the most action packed of shows, but it does make the most of its music. One notable thing about the show is the number of incidental songs in the show, plenty of romantic lyrics to complement the story, and certainly enough for a soundtrack CD. 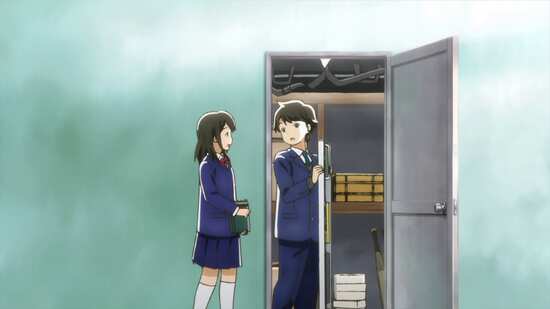 You get two discs in a thin BD Amaray style case, with one on each inner face. There is also a digital copy. There is more character art on the inner sleeve. The discs boot to static menus, and each episode is followed by a few screens of translated credits. 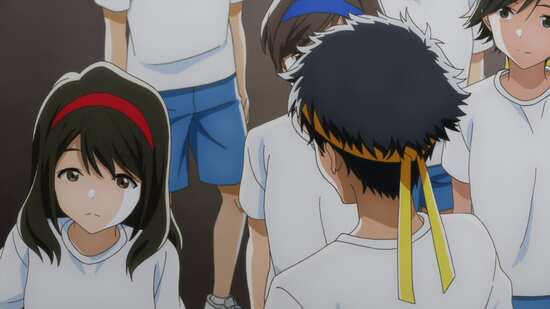 Disc 1 autoplays with a trailer for Your Name.

Disc 2 autoplays with a trailer for Orange, and offers further trailers for Kiss Him, Not Me!, Yuri On Ice, Time Travel Girl, and My ZHime. 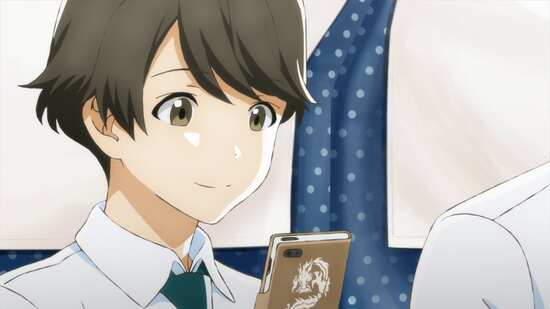 I’m a cynic. I must be, as I came to this expecting a middle school Romeo and Juliet, with star crossed lovers having to tragically battle the approbation of their respective cliques, the athletics club versus the literature club. There’s a small, harmless aspect to the story in Tsukigakirei which references that, but really, Tsukigakirei is a heart-warming exploration of awkward and halting first love. It wasn’t long before my icy heart thawed, and I became invested in the burgeoning romance between Kotarou and Akane. 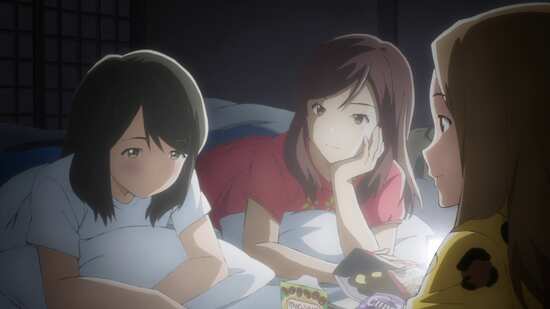 The sticking point for this show is the shyness of the main characters. This halting first love unfolds over twelve episodes, and for the impatient viewer, it might feel a little too slow. But awkward shyness is par for the course, an inability to communicate, and a tendency to overanalyse feelings and motivations. There is that attraction of differences, with Kotarou an aspiring writer, and Akane an impressive athlete, with each having a clique of friends that don’t really interact. 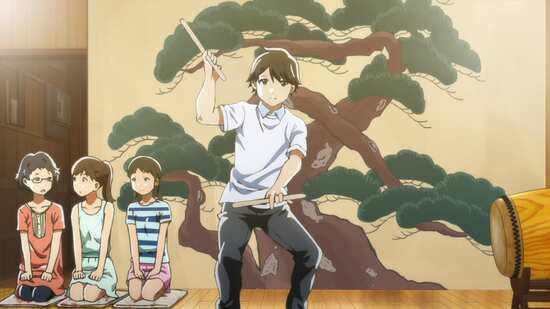 When they start the final year of middle school, Akane gets put into Kotarou’s class, and separated from her friends from athletics club. The unfamiliar faces make her look around, and she notices Kotarou, and that impression gets reinforced when their respective families coincidentally visit the same restaurant that evening. Their next chance to interact is during the school’s sports festival, when Akane loses a plushie toy that she strokes to alleviate her nervousness. Kotarou finds it for her, which sets them on a path for eventual romance. 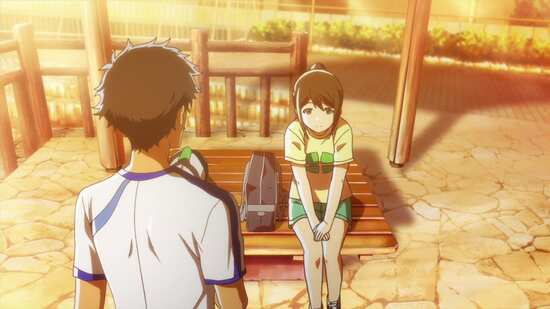 But there are impediments aplenty on the way. At the same event, Kotarou falls flat on his face in a race, and winds up getting first aid from Akane’s friend Chinatsu, and makes more of an impression on her. At the same time, all of Akane’s athletics club friends are keen on setting her up with another club member, Hira who does have a crush on her. Inevitably there will be jealous feelings, made all the more complicated as Chinatsu is Akane’s best friend. 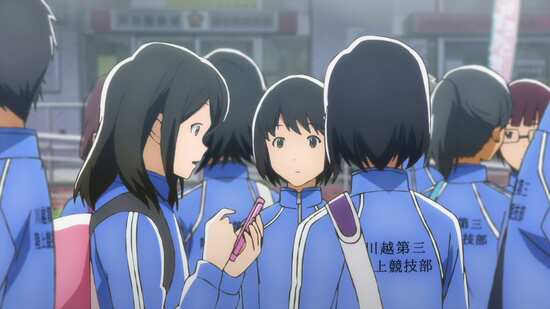 It’s not just romance, as they both have their respective interests, with Akane focusing on athletics, and having to face the choice between quitting athletics at the end of the year to concentrate fully on high school, or whether to keep training and developing her running. Kotarou’s an aspiring author, but his parents, especially his mother are keen to see him devote himself to his studies. They tolerate his writing, and the time he spends with the neighbourhood committee (for the summer festival), but expect him to drop it all for his exams and getting into the right high school. Kotarou’s a lot more serious about his writing though, to the point that it causes friction in his family. When he gets a girlfriend, it only compounds the issue. 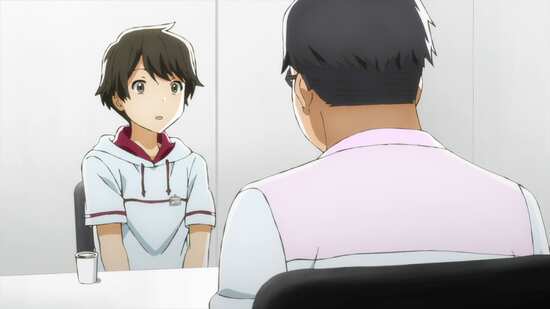 It would be an odd world if only Kotarou and Akane paired up in this particular school, and Tsukigakirei keeps it more realistic, and also uses those other relationships for some comic relief, brief sketches at the end of most of the episodes, following the other students that have paired off, and the moments of comic angst they experience. It’s here that you’ll find the only flat note in the show. Kotarou’s flamboyant friend Roman confesses a crush on the class teacher. As these short skits develop, she starts to reciprocate those feelings, although to her credit, she never lets him know. But still, it is rather unprofessional. 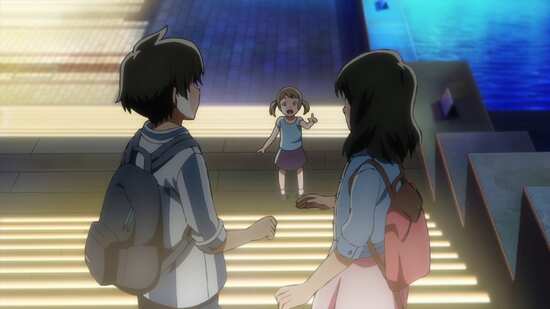 Tsukigakirei is a sweet tale of first love that tells it like it is, halting and awkward, with plenty of shy glances and sudden blushes. All these feelings are new and at full intensity, slight touches can send hearts racing, a careless word can be a betrayal, and a heartbreak feels like the end of the world. Tsukigakirei does a great job in invoking those feelings in the viewer vicariously, even if we’re old enough to know better. 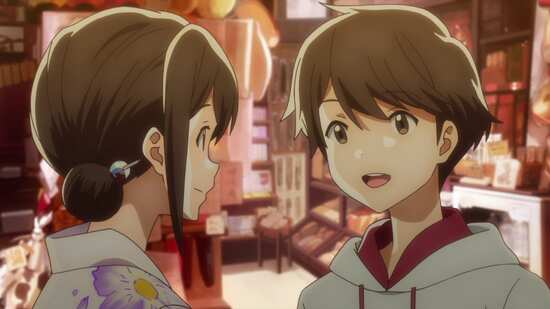 Tsukigakirei’s Blu-ray release is well worth a look. The audio visual quality is top notch, which given the show’s music, and the high quality and detailed animation is very much welcome. It’s the kind of sweet, innocent romance that you just don’t expect from Manga turned Funimation, and you’re left having to import shows like this from Funimation in the US.