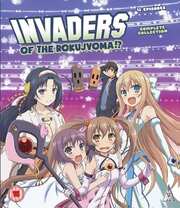 Review for Invaders Of The Rokujyoma!? Complete Collection

There was this transitional period between DVD and Blu-ray, where MVM were releasing their titles on both formats side by side. That meant as a reviewer, I would invariably get DVD check discs to review, which would be irksome if it turned out to be a decent show. Fortunately, there were and still are the end of year sales, where I would stock up on Blu-ray versions of the shows that I particularly liked. This Christmas was no exception, with MVM offering most of their catalogue at significantly discounted rates. But having partaken of the good stuff the last few years, I’m left now with DVDs of the shows that are more borderline than most, shows that I kind of liked, that I was sort of entertained by, that maybe worth double dipping on for high definition. Which bring us to Invaders of the Rokujyoma!?, an ‘everything and the kitchen sink’ harem comedy. Hopefully it’s the same the second time around. It might even be better... 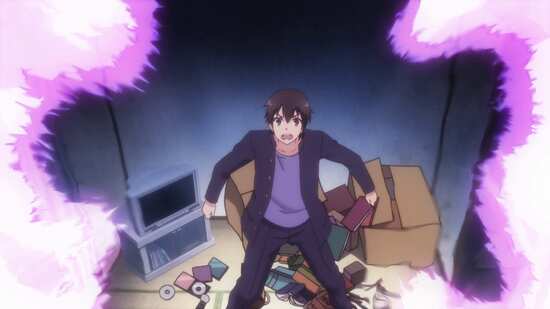 The start of high school means independence for Koutarou Satomi, and affordable independence at that, when he manages to get an apartment at the Corona House for just 5000 yen a month. There’s got to be a catch to the ridiculously cheap price. It certainly isn’t the pretty young landlady, Shizuka Kazagi, who’s actually a student in his high school class as well as collecting his rent. It could be the ghost in his 6-tatami room though. Sanae Higashihongan was there first, and she wants the interloper out. Just when the row heats up, a magical girl comes crashing through the window. ‘Rainbow’ Yurika Nijino needs the room to protect against the danger of an oncoming evil magic menace. And then the floor opens up and out climbs shrine maiden Kiriha Kurano, who states that the room is where her altar should be (although in actual fact this subterranean dweller wants to invade and take over the surface world. And finally a portal appears in the wall, and in steps an alien princess, Theiamillis and her aide Ruth, who want to take over the room, and have its inhabitants (Koutarou) swear fealty to her rule. One small room, and one boy and five girls who want to live there. Things quickly get out of hand, and violence ensues, although nothing compared to the violence that landlady Shizuka is capable of when she sees the damage to her property. She imposes a contract on them, if they want to compete for the room, they’ll have to do it peacefully. First they try playing cards... 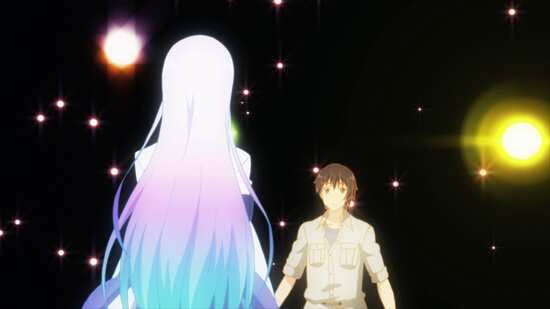 12 episodes of Invaders of the Rokujyoma!? are presented on one Blu-ray disc from MVM. 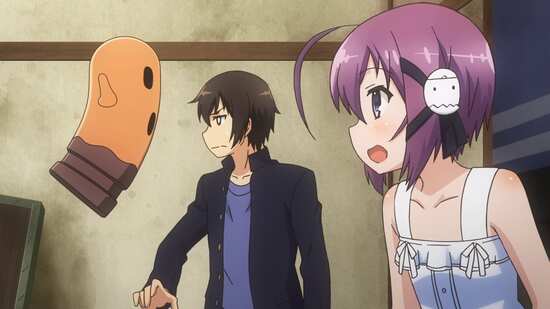 Invaders of the Rokujyoma!? gets a 1.78:1 widescreen 1080p transfer. The image is clear and sharp throughout, with strong consistent colours, no visible signs of compression, and little in the way of aliasing. It looks really decent given that all 12 episodes are presented on just the one Blu-ray disc. Silver Link do the honours when it comes to the animation, and they know which side their harem bread is buttered. The character designs are all very pleasant, conforming to the norms of the genre, while the animation is smooth and detailed, with a fair bit of effort put into realising the magical and sci-fi effects. 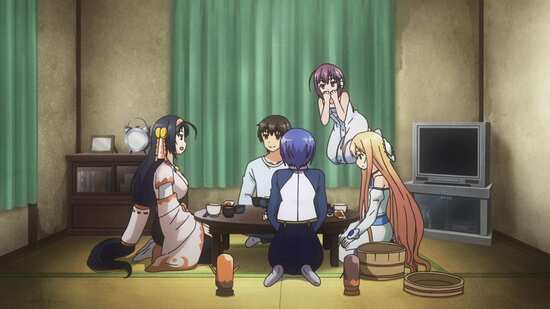 Invaders of the Rokujyoma!? gets the usual DTS-HD MA 2.0 Stereo Japanese treatment with player locked English subtitles; there is no dub. The actors are suitably cast for their characters, fulfilling the usual harem anime stereotypes with ease, and the dialogue is clear, the subtitles accurately timed and free of errors. The stereo is effective enough in bringing across the show’s action sequences, but despite me writing this less than 24 hours after watching the final episode, I can’t recall any of the theme songs, or the incidental music. The fact that I enjoyed the show indicates that it wasn’t detrimental to my viewing however. 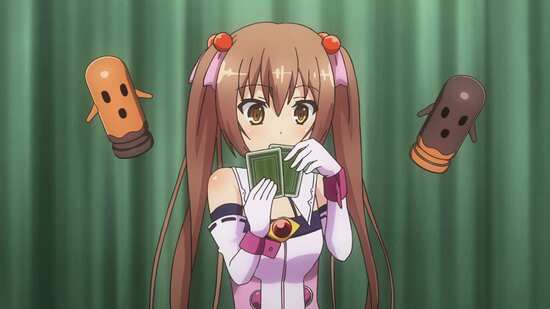 The disc autoplays with a trailer for Beyond the Boundary.

On here you’ll find the textless credit sequences, and Sentai trailers for Beyond the Boundary again, The Comic Artist and His Assistants, My Teen Romantic Comedy SNAFU, and Sabagebu! Survival Game Club! 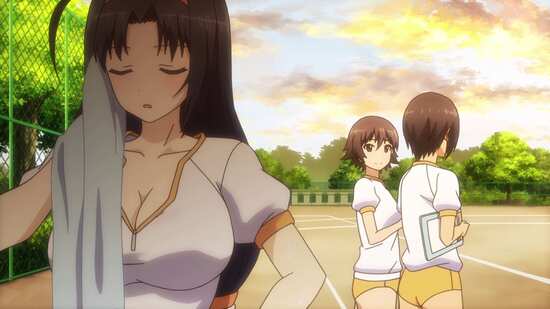 This isn’t the be all and end all of harem comedy shows, even if it mixes and matches all manner of sci-fi genres to create its particular harem. The Invaders of the Rokujyoma!? series is an entertaining and likeable show though, with pleasant characters, and an interesting, if fragmentary story. The problems with the show are two-fold. The first is that it ditches its initial premise, and the second is that as it’s based on an ongoing light novel series, it lacks a decent conclusion, and all of the interesting build up that does occur, that could potentially glue its fragments together, is wasted in a show that at the time of writing has no follow up series. And as usually happens in such shows, the likelihood of a follow up series is bleak indeed. For every The World God Only Knows and Rozen Maiden, there are twenty Invaders of the Rokujyoma that fall by the wayside. 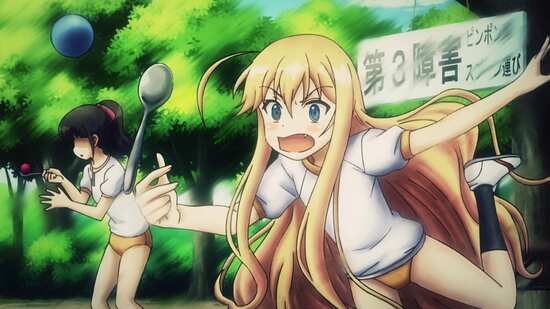 The initial premise is really quite daft, but if they could have somehow got it to sustain, they might have had a deliciously funny series on their hands. Koutarou Satomi starts high school, and through sheer good fortune, he bags a ridiculously cheap apartment, a 6 tatami mat room for just 5000 yen a month. Naturally there is a catch, and it turns out that he’s sharing with a ghost. Sharing is too strong a word, and in the middle of a row over who will evict whom, a magical girl arrives, staking her claim on the room, then a busty girl from the netherworld, followed by an alien princess and her aide. 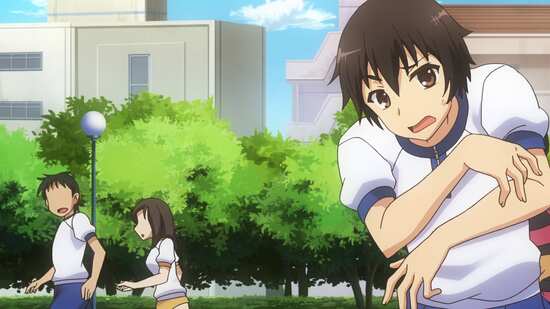 So there is one boy, and there are five girls all wanting to own the room, and when physical warfare is curtailed by the landlady, they have to work out a more equitable agreement. This being a six tatami room, they initially divide it among them, one mat per faction, with the central tatami as neutral ground, and the plan is to play games with fractions of their mats as stakes to let the overall winner claim the room. They start off with card games, and when the school has an obstacle marathon, they move onto athletics. 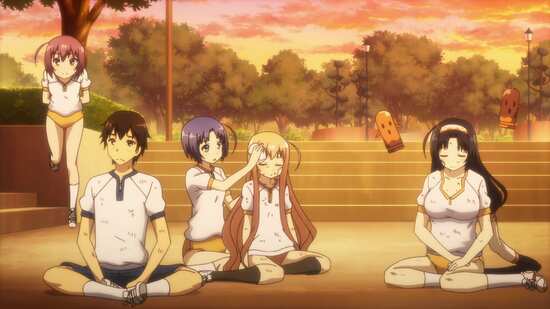 If they had got this to last the season, with all manner of daft competitions and over the top challenges, it could have turned out to be a classic comedy show, but unfortunately Invaders of the Rokujyoma!? moves on from this to the more mundane aspects of harem comedy anime by just the fourth episode, which is the obligatory beach episode, combined with an hot springs episode for efficiency. 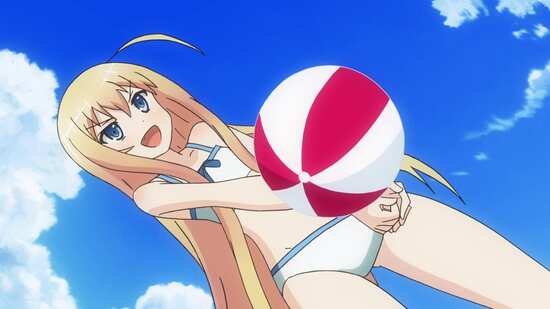 Now the show moves onto the girls’ stories, with two episodes devoted to Sanae the ghost. Her feelings hurt by Koutarou, she flies off in a huff, and gets captured by a couple of ghost hunters, and then Koutarou and the other girls have to rescue her. Two episodes are given to Theia’s story, as she co-opts the school’s drama club to put on an alien play, with Koutarou as the star, and this coincides with a rival alien showing up and attacking, needing Koutarou and the other girls to spring to Theia’s defence. Then Yurika the magical girl has two episodes, where she tries to get people to take her seriously as a magical girl, only an evil magical girl shows up requiring Koutarou to reveal his hidden magical abilities. Then Koutarou on a date with Kiriha... rival subterranean faction attacks, Koutarou, rescue ranger! It’s all finished off with the uber-cliched Christmas episode. Yes, Koutarou does get a last minute secret part time job... 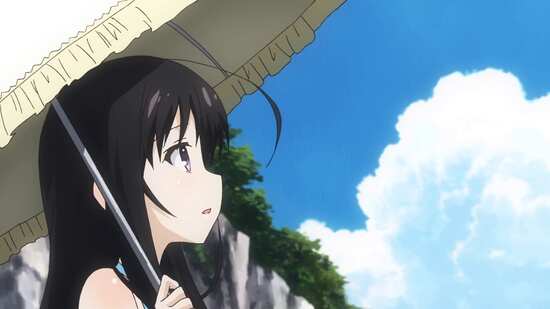 Just writing about Invaders of the Rokujyoma!? makes me sound like a cynical old grump, but the reality is that it is an enjoyable show, maybe because of the clichés. It’s the equivalent of a comfortable pair of slippers, you know exactly what you’re going to get. The harem even extends to the landlady Shizuka, and his upperclassman in the Knitting Club, Sakuraba, and much gentle would-be relationship hijinks ensue. If you watch Invaders of the Rokujyoma!? in the moment, take each episode, each story for what it is, and enjoy the character interactions, you’ll get the most out of the show. The problem is that it lays a lot of pipe for the overarching story that goes nowhere in these twelve episodes. 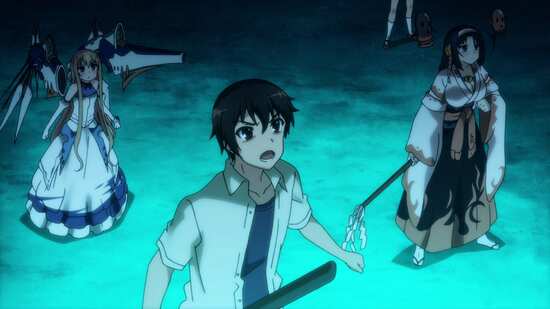 There are questions about who Koutarou really is, just how he relates to the girls (there’s the indication that he has some sort of shared past with at least three of them), and the sense that he is a lot more than just a humble high school student. In fact Invaders of the Rokujyoma!? leans heavily towards The Melancholy of Haruhi Suzumiya in some of the plot directions it suggests. Given the collection of magical girl, ghost, alien, and subterranean dweller, you might call it a poor man’s Haruhi Suzumiya, but really its pretentions to the otaku crown aren’t strong enough to draw serious comparison. Invaders of the Rokujyoma!? gets the expected AV upgrade on Blu-ray, but for my second time around with the show, my opinion hasn’t changed too much. It’s still a fun way to while away a few hours, and it’s utterly forgettable too.