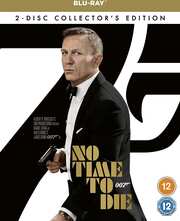 No Time To Die (Blu-ray Details) 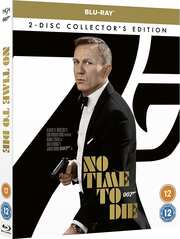 Review for No Time To Die

I was going to leave watching this latest James Bond movie until I had worked my way through the rest of the franchise on Blu-ray, but when it comes to picking a Christmas movie to watch, a recent blockbuster which I had yet to discover seemed the perfect choice. Of course that means that I’m guaranteed to finish the Bond Blu-rays on a downer now, but I’m willing to pay that price in exchange for a decent holiday film, assuming No Time To Die is a decent film.

Besides, we’ve all waited far too long for Daniel Craig’s final Bond movie, with it delayed for almost two years because of the Covid pandemic, so that it could finally open in cinemas, just as all big tentpole movies should. Of course there’s no little irony in that, given that the Bond franchise changed hands once more, and is now in the hands of Amazon, a company better known for online streaming of entertainment rather than theatrical exhibition. Bond really has been around the houses by this time. The franchise is produced by United Artists, a company which was acquired by MGM. MGM in turn has been acquired by Sony, then sold to Twentieth Century Fox (itself bought by Disney), and most recently sold on to Amazon. And for this home video release, Amazon are distributing No Time To Die through Universal. What’s one more logo between friends? Poor Paramount must be feeling like a wallflower at a school disco.

Bond was happily retired and living with Madeleine following the events of Spectre. That only lasted until someone tried to kill him, and jarred his innate distrust, which proved fatal for that relationship. Five years later, he’s living a quiet life in Jamaica, having put his career behind him. He can’t escape that life for long though. There’s been an attack on a secret bioweapons research lab in London, and a particularly pernicious weapon has been stolen, and an unscrupulous scientist has gone missing. His old friend, Felix Leiter shows up on the island, looking for a favour, when that scientist pops up again in Cuba. But there’s a new agent with the 007 mantle, and British Intelligence do not want Bond to get involved...

No Time To Die gets a 2.39:1 widescreen 1080p transfer, with the choice between Dolby Atmos English, Dolby Digital Plus 7.1 Italian, and DD 2.0 Stereo English Audio Descriptive, with subtitles in English and Italian. Following the yellow stain of Spectre, I was glad to see that No Time To Die had a more subtle approach to its colour grading. It is still heavily post-produced though, with a somewhat de-saturated colour palette to reflect its gritty approach. The image is clear and sharp, and with the film getting a whole dual layer disc to itself, there’s no visible signs of compression or the like. Audio is excellent, a nice immersive and effective surround track, bringing the film’s action sequences to life with vigour. Another modern Bond movie offers a theme song I think very little of, but this film has plenty of call-backs, both in its story, and in terms of its aesthetic, and revisiting Louis Armstrong was a genius choice. The dialogue is clear throughout, even Rami Malek.

Anyway, you get 2 discs in BD Amaray style case, one on a central hinged panel, all wrapped in an o-card slipcover. The cover art is a quick but forgettable Photoshop, which is another disappointment. The disc boots to a static menu, populated by Universal’s standard icons.

Disc 2 has the extra features, and they are.

That was pretty good, a fitting note for Daniel Craig to end his tenure on the Bond films, truly representative of everything the Craig era did to reinvent the franchise. It’s a film packed with the action that you’d expect from the franchise, the kind of doomsday scenario and villain’s lair that the last few films have been rather tentative about, finally embracing what the earlier Bonds did with tedious regularity by the end, yet when it comes to character arcs, this is the most personal story yet.

At just 15 minutes shy of three hours, this is the longest Bond film, but it certainly doesn’t feel that way. The story unfolds at quite a lick, there are plenty of twists and turns in the plot, plenty of globetrotting to do, and a lot of narrative to cover. It is a global threat that the world faces, a stolen bioweapon in very much the wrong hands. But the origin of that weapon lies close to home, and sows an internal conflict within the corridors of MI6. This is amplified when it’s Felix Leiter that first comes to Bond, asking him for a favour on behalf of the CIA. Given that this film was made in the Trump era, it posits a freezing of relations between the global intelligence agencies, which also adds tension between Bond and his former employers.

There’s also a fair bit of detective work to do before Bond finds the true villain behind the plot, although the ‘red herrings’ are quite plausible, and once again build on Bond’s character, what he’s been through in his career. The strength of the story is that this time, when it comes down to it, it’s not about Queen and country, it’s not just about saving the world, it’s actually a personal mission for Bond, to protect people that he cares about, and to save his own future.

One dead end in the film, which isn’t really a criticism, is the new 007, who is now a skilled and capable woman. Indeed she isn’t alone, as the female characters in the film are just as capable as the men, and the film proves that the world of women secret agents is just as action packed and thrilling as the world of James Bond. I say it’s a dead end though, as the producers have made it clear that James Bond is, and always will be male; no Doctor Who like regeneration here. But I wouldn’t be averse to a Nomi or Paloma spin-off franchise.

What Daniel Craig’s reinvention did was to create a very human and vulnerable James Bond, a Bond that suffers, that ages, that grows, and in his five films he gave Bond a beginning and an end, from recruitment to retirement. In another review, I noted that we never get to see Craig’s Bond in his prime, doing the nine-to-five as a secret agent, and by Skyfall we were looking at Bond ready to quit his career. I now don’t see that as relevant, as all of the other Bond movies before this actually did show the Bond character in his prime. The character arc that Craig created is new, and that’s reflected in the continuity between the films. The story that begun all those years ago in Casino Royale reaches its natural conclusion here, and in that way No Time To Die may be the most satisfying of the Craig Bond movies.

Also, the 25th Bond movie, the last of the Craig era takes the time to celebrate the franchise, with plenty of touches to earlier films, from the Dr No style opening title, to the obvious allusions to On Her Majesty’s Secret Service. There are plenty of gifts to Bond fans, including one moment that made me genuinely whoop at the screen; rather embarrassing when I was the only one in the room. All of this is deftly done, no sign of the crassness of Die Another Day.

There is a criticism though, and you knew there was going to be one. It’s the villain, the daftly named Lyutsifer Safin, played by Rami Malek. I though Christophe Waltz was a wet fish as Blofeld in Spectre, but he’s a Hans Gruber of a villain compared to Rami Malek in this film. Safin is a wilted lettuce of a villain, about as menacing as Walter the Softy, more of a child that never stopped sulking rather than a man who holds the fate of the world in his hands. Despite the film’s process in establishing his back story in the opening scene, his motives never really quite make sense; certainly feeling a little too comic book for the more realistic take that the Craig films have chosen.

There’s a sense of that in the Maguffin as well, a little too far-fetched, approaching the campness, and sci-fantasy shenanigans of films like Moonraker and The Spy Who Loved Me, where films like Spectre and Skyfall had more plausible motives for their respective villains. In fact I remember this particular Maguffin employed in an episode of the BBC’s fantasy tech-thriller Bugs way back in the nineties.

In a lesser film, these issues could have been fatal, but because No Time To Die is more about the characters, about Bond in particular, characters that the film has taken pains to get the audience invested in, that it’s possible to dismiss the film’s flaws and just revel in what it gets right, which it does so for most of its runtime. No Time To Die is a fitting swansong for Daniel Craig and his five film run really comes together as a cohesive whole. The Bond producers now have a bigger problem. They can’t do this approach again, and will have to reinvent the character from the ground up once more, and more importantly, they can’t go back to how Bond was made in the Brosnan era and before, as audiences have seen that they can do better. The next Bond will have some really big shoes to fill.

The presentation of the film on disc is just what you’d hope for from a high profile cinema blockbuster, but the extras really aren’t worth mentioning.