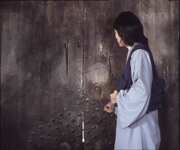 Promises should always be kept. That was rickshaw puller Ling Feng’s intention when he promised his wife that he would never fight again, and he had good reason to make and keep that promise. The problem is that there are two rickshaw companies in this town, and the rivalry is far from friendly, especially with Cui Bao of the opposing company an obnoxious bully. And that company has some influential backers, as well as access to some ‘hired guns’ to throw their weight around. Ling breaks his vow when he sees Cui Bao almost beating a defenceless child to death, but by raising his fist, Ling has opened a can of worms that will wreck his world.

Shaolin Kung Fu gets a 2.35:1 widescreen 1080p transfer with the choice between PCM 1.0 Mono Mandarin and English with optional English subtitles and signs. This is an older film, and that does tell in the transfer, although it is pretty clean, free of print damage and signs of age. Focus appears to stay steady throughout, and detail levels are good. However there is a slight softness and a couple of frame jumps. It just feels like a seventies movie, which is a purely subjective statement. There is a slight spaghetti western aesthetic to the direction, and indeed the music. The audio is fine, not too marred by distortion as some of the other films are, while the dialogue is clear throughout, the subtitles free of typos and accurately timed.

Shaolin Kung Fu gets a commentary from Mike Leeder and Arne Venema.

It’s a trope almost as old as the rival kung-fu schools cliché in martial arts movies. The guy that promises never to fight again, following a traumatic incident, then goes on this journey of ultimate provocation before he snaps and unleashes an arse-kicking the likes of which the world has never seen. What this has to do with Shaolin is unclear, but there was a period when the marketing gurus knew which side their bread was buttered, and every kung fu movie had Shaolin in the title. It got to the point where the Shaolin monastery finally sued and got back the rights to their IP. And while Shaolin Kung Fu might not be that Bruce Lee movie that you’re all thinking of right now, it’s not bad. In fact, I actually got quite into it before the end credits rolled.

Ling the rickshaw driver looks like a wimp at first glance. That’s because he keeps his head down and refuses to be provoked, especially by the rival rickshaw company who steal all their fares, and take pleasure in kicking dirt in their faces. They are an obnoxious bunch, and you wonder just why the star of the movie is so timid. He has to act when it’s a child being attacked though, and we learn something of the steel within him when he refuses to yield to the bully that he has thus far capitulated to. It’s when we meet his blind wife that we finally learn of his background, and the incident that drove him to renounce violence.

By defending that child, he has kicked off a vendetta that just goes on escalating. The rival rickshaw company owner wants to fight back, so he pays some thugs to attack Ling. And when that doesn’t work, he goes to the town bully, son of a local boss. The bully goes looking for Ling, and instead finds his blind wife, and being the kind of misogynistic pervert that he is, the bully’s about to have his way when Ling walks in on him and his henchman, and reacts the only way a clandestine kung fu master would react. And now he has a vengeful father looking for his head on a plate, and willing to do whatever it takes to get him, including hurting the people that he cares about.

The kung fu action is good, choreographed adequately, but without any sense of the spectacular, or relying on any impressive stunts. Where it does work is that the fight sequences have the emotional impact that drives the story, even if they don’t look all that polished. As the end credits roll, you might be left with the lingering impression that Ling might have been better off if had just kept his promise to his wife. But you do invest in his struggle, and certainly the vicarious triumph you feel as he bests his foes is palpable. This is a film that rewards the viewer in that way at least, even if it does take a good half of the film to get to that point. Shaolin Kung Fu is better than I expected.