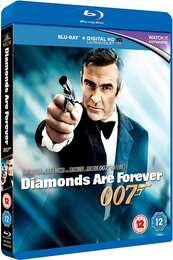 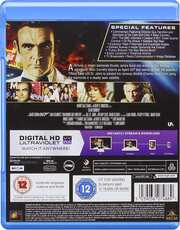 Review for Diamonds Are Forever

It’s funny how the passage of time changes perceptions. When I was a kid, On Her Majesty’s Secret Service was an interminable bore, with a horribly miscast James Bond. And now, it turns out that while George Lazenby wasn’t ideal in the role, he wasn’t that bad, while the movie itself is one of the better entries in the franchise. Negotiations and relationships soured after that film, and the producers found themselves in the position of having to find a new Bond all over again. For some, the risk was excessive, so the decision was made to just open a wallet, and let Sean Connery take what he wanted in order to come back to the role. Given what he had said about the franchise after You Only Live Twice, they needed a big wallet. When I was a kid, I absolutely loved Diamonds are Forever; after all, it had a giant fricken space laser!

James Bond has finally managed to track down and eliminate his arch-enemy, Blofeld... in a plastic surgery clinic. Now he has to go back to work, although he isn’t initially impressed with the mission, infiltrate and investigate a diamond smuggling ring. Large quantities of the gems are being stolen from South Africa’s mines and diverted elsewhere. The trail begins in Amsterdam, where he meets contact Tiffany Case, the American woman who has the diamonds. He’s supposed to help her get them to the US, and Las Vegas, where the leads point to wealthy recluse, Willard Whyte. But all isn’t as it seems, while a couple of assassins, Mr Wynt and Mr Kidd are also following the smuggling ring, and eliminating everyone in it.

Diamonds Are Forever is presented with a 2.35:1 widescreen 1080p transfer with DTS-HD MA 5.1 Surround English, Dolby Digital 1.0 Mono English, Dolby Digital 5.1 Surround Spanish and Portuguese, and DTS 5.1 Surround German and French, with subtitles in these languages and Dutch, Danish, Finnish, Norwegian and Swedish. This is one of those good 4k restorations from Lowry Digital, with excellent clarity and rich and consistent colour, while remaining naturalistic, especially when it comes to skin tones. Grain is managed to an extent while contrast levels are fair. I stuck with the mono English for the duration. I gave the surround track a try, and found it to be a little forced, especially with the way the music is buried in the mix. The mono balances the dialogue, action and music as you would expect, without showing any sign of age. It’s rich and resonant, and makes the most of Shirley Bassey’s finest Bond theme song.

You get one disc in a BD Amaray case with a UV code. The disc boots to an animated menu. There are a fair number of extras on the disc.

The MI6 Commentary features director Guy Hamilton and members of the Cast and Crew.

There are 13 categories of image in the Image Database.

It turns out that Diamonds Aren’t Forever. You were expecting that one, weren’t you? This film hasn’t aged well at all, and it’s not the dubiousness of Wynt and Kidd, or Bond and his gender politics which most 21st Century critics seem to pick up on, although sharing a Maguffin with Dire Another Day might be considered a post-modern criticism. You can see in the extras how Diamonds was initially intended to be a sequel to Goldfinger, and you can see that template still in the narrative, although the conclusion owes a little more to Dr. No. But tonally, this film is all over the place, which I find to its detriment now.

Dr. No came out in 1962, and Diamonds Are Forever was released in 1971, yet Sean Connery looks as if he aged 20 years between the two films. Actually he looks as if he aged 20 years between this and You Only Live Twice, and the character doesn’t seem at home in the 1970s. The film begins with a degree of promise, with Bond at his most brutal to date at this point in the franchise. He pursues Blofeld with such a lethal intensity that he almost seems nasty. The filmmakers also tease us with a character reveal following the ‘diversion’ of Lazenby in On Her Majesty’s Secret Service.

From gold to diamonds, as Bond is assigned another, seemingly tedious case but quickly gets sucked into a world threatening plot that goes way beyond diamond smuggling. He approaches the case with the same intensity and brutality as when he sought Blofeld, with a notable claustrophobic elevator fight sequence an impactful example. But against this is the film’s tone, which presages Roger Moore’s era with some really out of place comedy, with Wynt and Kidd getting into the post death quip habit, and taking it to Austin Powers levels of overuse. Once the daft moon buggy appears, I was looking for a pigeon doing a double take.

There are also issues with the film’s editing, making the story feel bitty and inconsistent. The way Tiffany Case drops in and out of the plot leaves glaring holes. At no point in a film should you be wondering what an absent character is doing, but it really feels as if she’s in suspended animation when she’s not on the screen. That’s nothing compared to the unfortunate case of Plenty O’Toole, the other Bond girl in this movie, who after a brief, and memorable appearance, only returns as a corpse. The Deleted Scenes reveal a whole missing plot line which offers some explanation, but what’s left in the film doesn’t justify Lana Wood’s placing in the credits. I also find a weakness in the villain of the piece, and Charles Gray makes for the least threatening Blofeld in the franchise, made more obvious as the actor played a different part in Connery’s previous Bond movie, You Only Live Twice.

Sean Connery made a Roger Moore Bond movie, and my brain can no longer handle the cognitive disconnect. I didn’t know what a cognitive disconnect was when I was a kid, which explains why I once thought that Diamonds Are Forever was my favourite Connery Bond. I still like it more than Thunderball though. It does get great treatment on Blu-ray however.