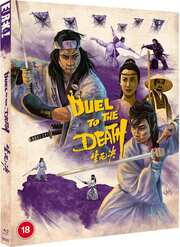 Duel To The Death (Blu-ray Details)

Review for Duel To The Death

Autocorrect wants this movie to be called Due to the Death. There’s a fifty-fifty chance that I’ll have a meltdown before I finish writing this review. I do like martial arts movies, but they are martial arts movies from a specific era, featuring certain actors and focusing more on the physical, hand to hand combat type of thing. I’m less enthused about weapons, especially swords. While I do like a good Highlander movie (there was only one), and have a lot of time for lightsabers in cinema, in Hong Kong action films, sword fights are usually lightning fast, with plenty of wirework, overly flashy and with a whole lot of clangy noises. They always felt like they were trying really hard to hit the other guy’s sword, not hit the other guy. So I didn’t request a check disc for Duel to the Death. But Eureka Entertainment sent me a check disc anyway, on the off chance that I might get curious. “Often hailed by critics as the best swordplay movie ever!” at the head of the blurb sheet certainly did get me curious.

For generations, the best swordsman in China faces off against the best Japanese swordsman to see who is best, and for honour. Currently, the best Chinese swordsman is Bo Ching-wan, student of the Shaolin School, a more contemplative discipline, which sets up a philosophical clash as well against Japan’s Miyamoto Ichiro, who has been taught to seek victory at all costs. They will meet at the House of the Holy Sword for this year’s duel. But there are those who have other plans for this duel, and the purity of the competition has already been tainted.

Duel to the Death gets a 2.35:1 widescreen 1080p transfer on this disc, with the choice between PCM 2.0 Mono Cantonese and English, with optional English subtitles. The image is pretty decent for this film, clean and sharp, with strong consistent colours, and an absence of print damage or signs of age. Grain is more apparent in darker scenes, and black levels and contrast might not be too strong at those points, but brighter scenes are rich with detail. Otherwise problems might be apparent in the source; the odd scene that drifts out of focus. My biggest take from this is that some hairpieces aren’t blended well enough into the make-up, for HD presentation. The audio is adequate. The Cantonese track that I listened to was fine, if a little distorted and harsh at higher volume levels; just as you’d expect from a mono tape source of this era. The subtitles are accurately timed and free of typos, and there are a few translation notes as well, especially when it comes to Buddhism.

The first run release of Duel to the Death will come with a 32 page booklet with writing on the film from James Oliver, and the original laserdisc liner notes written by Frank Djeng. There are plenty of production and promotional images as well.

The disc boots to an animated menu, and on it you’ll find the following extras.

Gravity defying, sword fighting martial arts is never going to be my genre of choice, but there was something about Duel to the Death that won me over. The instant that I saw that this duel would be China versus Japan, my expectations became more certain, given the controversial history between the two countries. Yet in the end, while in some ways the film delivered on those stereotypes, it defied them in even more ways.

This isn’t your typical ‘Chinese martial arts hero gets downtrodden by arrogant Japanese until he takes a stand and defeats the aggressor’ movie. In reality, Duel to the Death could be almost as Japanese a film as it is a Hong Kong feature, with a more brutal take on the clash of swords, and a storyline which is just as dependent on knowing Japanese cultural archetypes as it is on knowing the Chinese ones, like the philosophy of the Shaolin Temple. Certainly the anime fan in me was being triggered by mentions of the Yagyu, and the big part the Iga ninja play in the story.

For while the duel takes centre stage, with the contemplative student of Shaolin destined to face the Japanese samurai dedicated to victory, there’s a whole other story unfolding in the background, an insidious plot where the Japanese seek to steal all of China’s martial arts secrets and styles and take them back to Japan. The first scene kicks off the film with a band of ninja breaking into a library to copy a rare scroll, and those ninja pop up time and again to harry the protagonists. These ninja are full of tricks, and armed with special abilities and devastating skills, and could come straight out of Ninja Scroll.

Miyamoto Ichiro sees his loyalties put to the test by this. For him the priority has to be his skill, his sword, and the honour that comes with it. The Shogun himself gave him the sword to use in the duel, but then it transpires that the Shogun has other plans... Miyamoto has to decide between his honour and his loyalty. For Bo Ching-wan there doesn’t seem to be much to contemplate with regards to this at first, but the duel is supposed to take place at The House of the Holy Sword, a family that used to be the champions in this regular duel, but who have now been left with the ‘ignominy’ of hosting it instead. Bo Ching-wan falls for the daughter, herself a notable swordswoman, but her father has other ideas.

Despite all that they go through, how the protagonists' preconceptions are challenged, the film would be accused of false advertising if it didn’t culminate in a duel. But far from the elegant, genteel wire-fu of something like Crouching Tiger, this duel wouldn’t be out of place in Shigurui Death Frenzy. The difference is that the two combatants have a mutual respect and admiration rather than an intense hatred. But they still wind up doing the kind of damage to each other that makes you lament the waste of life, rather than revel vicariously in some cool kung-fu action delivered by a deserving victor over an utter cad of a foe. In that respect, Duel to the Death is a most atypical martial arts movie. Once again, Eureka Entertainment’s presentation can’t be faulted. Duel to the Death is well worth a watch.