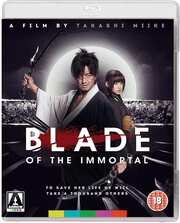 Blade Of The Immortal (Blu-ray Details)

Blu-ray
The Happiness of the Katakuris
Related Articles

Review for Blade Of The Immortal

When I reviewed the DVD release of the Blade of the Immortal live action feature 3 years ago, I was comparing it to the anime series, released here by MVM, and found it to be vastly superior when it comes to pace, characterisation and drama. It was certainly good enough for me to make a mental note to upgrade to Blu-ray at my earliest convenience, and this time that mental note didn’t get erased in the interim. What did happen in the interim though was that another studio took a crack at adapting the story to anime form, and while I have yet to see it, by all accounts LIDEN Films’ 24 episode adaptation has had a better reception than the BEETRAIN original. Still, Takashi Miike set a high bar with this film for that second series to aim at.

Manji’s life was cursed before he became immortal. His superior was corrupt, and expected Manji to go along with the corruption. He didn’t, turning on his superior instead, and failing to give his own life in repentance, he slew the six men sent to capture him, including his sister’s husband, an act that drove her insane. She was killed by the bounty hunters who came looking for his head, and in his last act, he slew the bounty hunters, a hundred of them. Only for an ancient crone named Yaobikuni to infect him with the bloodworms that healed his mortal wounds and left him immortal.

50 years later, a young girl named Rin has an incongruous ambition to succeed in her family’s sword dojo. Not that she has the chance, as the wind of change is passing through the nation. The Itto-Ryu group led by Kagehisa Anotsu wants to be the definitive sword-style in the country, and is assimilating or destroying all other sword dojos. They murder Rin’s father, take her mother and destroy the dojo completely. Rin wants revenge, and when Yaobikuni suggests the immortal Manji as her bodyguard, it looks like Rin will have her chance.

The DVD had its weaknesses, especially when it came to the audio, which was the first reason why I went straight for the double dip. The Blu-ray gives a 2.35:1 widescreen 1080p transfer, and the choice between a full-throated DTS-HD MA 5.1 Surround Japanese track, and a PCM 2.0 Stereo English audio descriptive track with optional English subtitles. It’s almost a tale of two movies with Blade of the Immortal, as the monochrome flashback prologue looks exquisite on the Blu-ray, with excellent detail and vivid contrast. Compared to that, the main thrust of the film, set in colour is merely good. Detail levels are still spot on, but contrast isn’t quite as vivid, and dark detail can fade into grey. The audio is excellent, immersive and vibrant, while keeping the dialogue clear throughout. The subtitles are accurately timed and free of typos.

You get one disc in a BD Amaray case with a reversible sleeve. Inside you’ll find a 24-page booklet on the film, with writing from Anton Bitel that focuses more on the Miike side of things than the source material, interspersed with plenty of production imagery and stills. The disc boots to an animated menu.

Blu-ray exclusive extras include the following

These take behind the scenes looks at the opening and closing fight sequences respectively.

There’s no way these would have squeezed onto the DVD, and there’s plenty to appreciate here.

Now this is what I wanted from that first anime series all those years ago! The Blade of the Immortal movie has the same strong story, the same interesting characters, but the writing is sharper and less self-indulgent, building on the relationships between the characters, and the story flows much better too, really filling the 2 hour 20 minute runtime. It also goes without saying that the action is stupendous, brilliantly choreographed and executed. 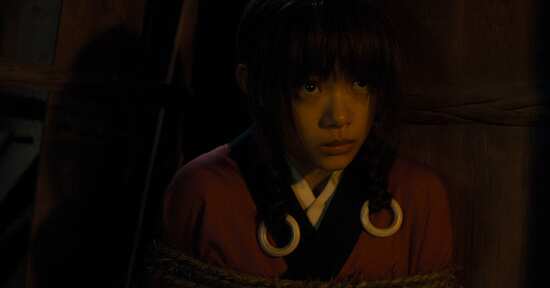 The story unfolds the same way, up to a point. There’s no mention at all of the 1000 deaths required for Manji’s redemption, which was far beyond the scope of a 13 episode adaption of an ongoing manga, and quite clearly can’t be resolved in a feature film runtime. But in all other respects, the film unfolds in the same way, showing Manji’s back-story, as well as the destruction of Rin’s family. The first few encounters with the Itto-Ryu also unfold the same way, the ‘three headed’ Sabato, the ninja Taito Magatsu, the monk Eiku Shizuma, and Makie, but from that point Miike constructs an original conclusion worthy of the storyline, but which can be told in the film’s runtime.

At the heart of the film is the relationship that develops between Manji and Rin. When Rin first meets Manji, he’s been immortal for 50 years, and hating every minute of it, burdened by the guilt of what he had done, and what subsequently happened to his sister Machi. It’s Rin’s resemblance to Machi that gets him to re-engage with the world, and despite himself he develops an affection for Rin. Rin on the other hand has nothing but revenge on her mind, to find and kill the murderers of her father, and Manji is just a means to an end. As he’s immortal, his limbs re-attachable, he’s a more useful means to an end than anyone else, but as she gets to know him, learn from him, she begins to see him as a surrogate father, and illogically even becomes protective of him.

While Rin’s vengeance is small-scale and personal, she and Manji find herself in a bigger situation, as national politics threaten to overwhelm them. The whole point of the Itto-Ryu rampage through the sword dojos has been to reshape the country, to assume a position of power and influence. The Itto-Ryu’s ambition has been to be the official sword instructors to the shogunate, and it turns out that there are factions who oppose this ambition with lethal intent. Rin and Manji aren’t the only ones looking to kill Anotsu Kagehisa, and they wind up caught in the middle of a bigger battle.

When Rin does confront Kagehisa, she also learns an important lesson that revenge begets revenge, that his actions against her father were partly motivated by a slight that her ancestors inflicted on his generations back. In what could be a simple hack and slash Samurai movie, the depth and complexity of the story makes it far more compelling.

Blade of the Immortal is a splendid, blood-drenched action movie, but there is enough going on under the surface in terms of character and story, that make it a potential future classic of the genre. I am so glad to have upgraded the film to HD. The obvious upgrade in audio, from 320kbps lossy Dolby Digital to lossless DTS-HD is a given, but the visuals are delightfully crisp as well. I wasn’t expecting all those extra features though, practically an entire movie worth of cast interviews isn’t to be sniffed at. I really have to see how that newer anime adaptation fares now.