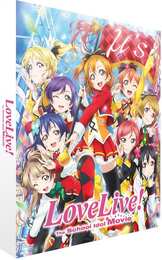 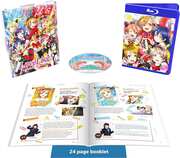 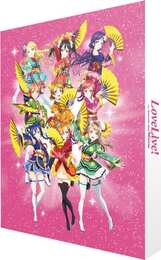 I watched Love Live once, and didn’t think much of it. Quite frankly, I wouldn’t have bothered watching it again, but MVM went and re-released it within six months, as they suddenly had access to the dub (the collector’s edition DVD was subtitle only). A second viewing and I was hooked, and when MVM got the Blu-rays as well, I was watching the show for a third time. When Love Live Sunshine came out, this time via All the Anime, I had no qualms about watching the first instalment, but got so impatient for the second set, I went and imported it from Australia when All the Anime had one of their ‘epic delays’. But the two things missing from the UK until now were the Love Live feature film spin-offs, although I seem to recall that All the Anime did bring over a Bandai limited import version of the Love Live Sunshine movie a couple of years ago. But this year, they are releasing both of the Love Live movies in the UK on the Anime Limited label, and first up is Love Live! The School Idol Movie Collector’s Edition. We’ve had to wait quite a while for this one... NISA released it in the US way back in 2015. 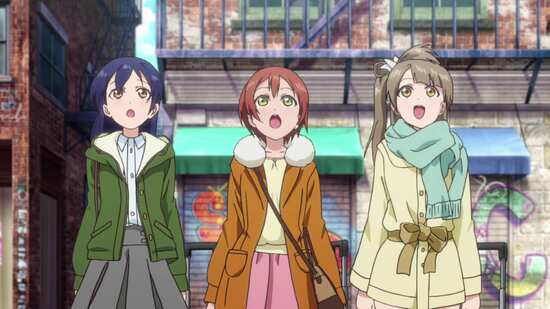 Honoka Kosaka was driven to start a girl group when she learned that her school would be closing, due to the lack of new students applying. The school idol phenomenon gave her the idea, to garner enough publicity to prevent the school’s closure, by winning the Love Live! School Idol contest, held regularly in Japan. To that end, she gathered eight more, like minded girls from the school, and created the group, μ’s, pronounced “muse”. Together, the nine of them succeeded in reprieving the school, and they won Love Live! too. But the school year came to an end, with three of their members graduating, ending μ’s as a group. 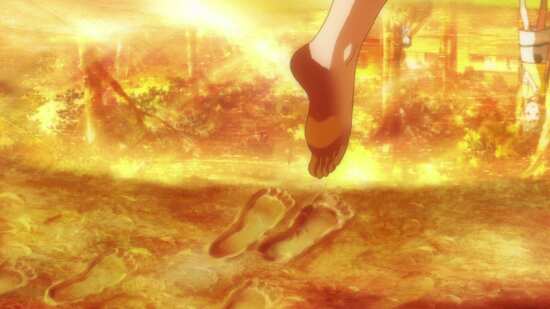 Only at the last minute, the phone rang. It turns out that the next Love Live! contest is just a month away, and it will be held in the largest location yet, the Akiba Dome. There’s no guarantee that they will even be able to fill the arena, and to get the word out, the promoters want the previous winners to bring the contest to the world. They may have graduated, but the school year isn’t over yet, and μ’s still have a few performances left in them, even if it means going halfway around the world for maximum publicity. When they come back, they learn that they’ve really hit the big time, which begs the question, should μ’s continue, even after the end of high school? 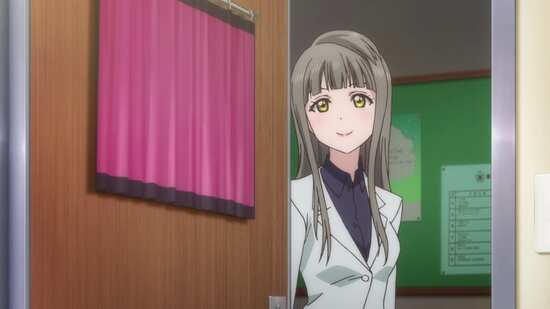 This is the NISA release, authored by MediaOCD, reworked for Region B. The 1.78:1 widescreen 1080p transfer is accompanied by DTS-HD MA 5.1 Surround and PCM 2.0 Stereo English and Japanese with optional subtitles and a signs only track, although the language select menus are a little kludgy. The image is clear, sharp and very colourful, bringing the bright and vivid animation across with few if any issues. About the only thing I can point to is some rare and very light banding. If there was one thing that stuck out to me in the TV series, it was the jarring transition between traditional 2D and 3D CGI during the song sequences, but in the movie, the transitions are a lot more nuanced. The audio is fine, nice and immersive, with a fair bit of use for the surrounds. The character voices come across well, and the all important music impresses. The subtitles are timed accurately, and are free of typos. 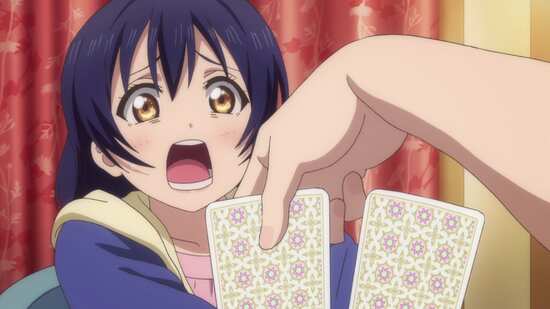 You get one disc in a BD Amaray case, with the sleeve replete with art, unmarred by text, both inside and out. The text is on the thick artcase, along with more art, and on the blurb sheet that you can store inside with the Amaray. 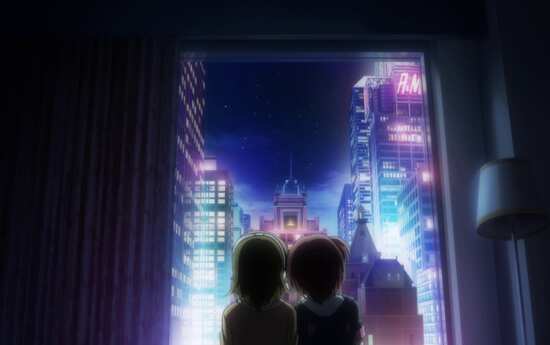 There is also a Collector’s Edition Booklet, 24 pages with a synopsis for the film, character profiles and cast interviews and plenty of character art.

The disc offers 7 Japanese promos for the film, and the Textless Ending. 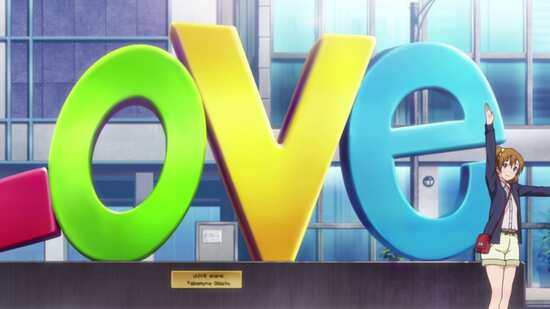 I have been torn trying to rate this film. For me, it’s a 7, 8, or 9, depending on how you look at it. There’s a part of me that is quite disappointed by it, and there is a part of me that really loves it. And all of this is happening simultaneously. It’s a rather cynical remake of a far better film, while at the same time it’s the send-off that the μ’s girls so richly deserve. Once you get past the obvious criticism, it’s a thoroughly entertaining and well put together piece of delightful fluffiness, and I’d defy anyone not to be fulfilled by watching the School Idol Movie. 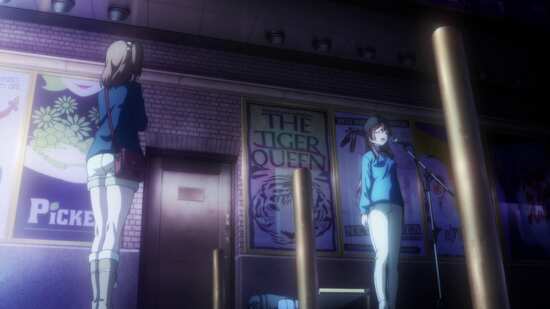 So let’s pick up our crowbars and get the elephant out of the room first. It’s the K-On! Movie warmed over. In the K-On! feature film spin-off, Hokago Teatime were facing graduation, and the realisation that they would be separated from their youngest member. To offset that ambivalence, the girls went on a trip to London, where they had plenty of opportunities to perform, and there was a delightful anime travelogue, with cute girls doing cute things. In the School Idol Movie, μ’s are facing the breakup of the group following graduation, but they get to go to New York, where an anime travelogue ensues, with cute girls doing cute things, and there are more than a few songs as well. When it comes to Kyoto Anime’s quality animation, and the richness of the characters and storytelling, it’s obvious that the K-On! movie is in a different league. And comparing the two is not a good idea. 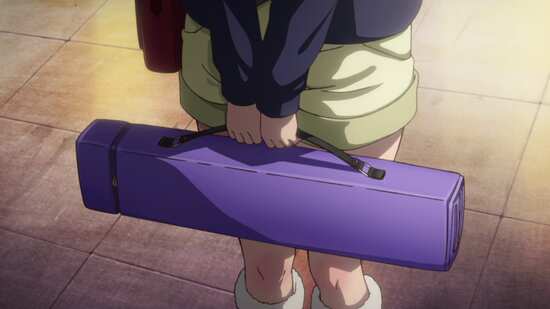 But if you are a fan of Love Live!, if you’ve invested in, and come to love these particular characters and their story, then this film will more than satisfy. The bittersweet emotions that come with graduation, with change, and with the realisation that the group, the music that the nine friends have invested in, and worked together for has to end, is what drives the film, and takes the girls, and Honoka in particular on a very personal journey. The question of what happens to μ’s after graduation, especially when they see just how much their fans appreciate them, makes the story very meaningful. The film keeps things light, and entertaining, while at no point diminishing the emotion. 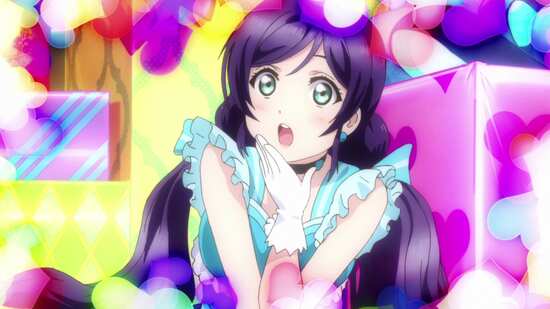 One thing to note is that The School Idol Movie is a musical. More than a show about music, where the performances are confined to stage appearances that are inherent in the story, this is a film where characters can burst into song at the drop of a hat, at the mere spike of an emotion. The stage performances are still there, but it allows for a lot more variety in animation, and in choreography if the songs can happen regardless of context. The Love Live series did this once or twice in the run, but not to the same degree as the movie, which really makes it deserve the Musical descriptor. 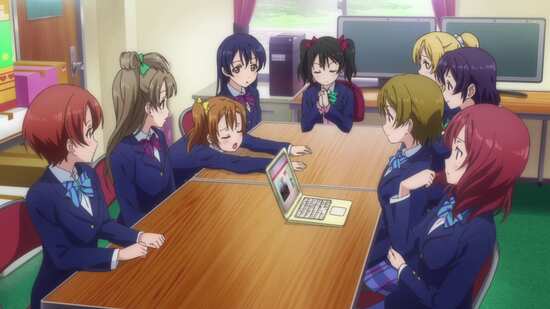 I know that the Love Live franchise isn’t the greatest out there. It’s very obviously a tie-in anime, designed to push music, games, and merchandising, and the archetypal characters, the rather predictable narratives, and sense that it’s all put together by committee should deserve more criticism. But if you let yourself fall in love with the franchise, you tend to the put the criticisms to one side and just revel in the feelgood nature of the enterprise. At this point I love Love Live! And the film doesn’t disappoint.