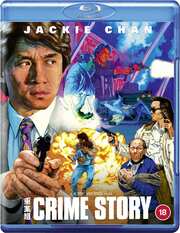 88 Films have been top tier of late when it comes to giving the true, ultimate edition treatment to classic Hong Kong cinema, and with Eureka Entertainment have formed an unbeatable tag team, which makes the kind of thing Hong Kong Legends were doing once upon a time, seem like the work of mere dabblers in comparison. But it’s been a steep learning curve, and I’ve shied away from some of their earlier titles. Crime Story was the fifth Jackie Chan film they released on Blu-ray, after Dragon Fist, To Kill With Intrigue, Battle Creek Brawl, and Snake and Crane Arts of Shaolin. 1970s Jackie Chan has never really appealed to me in the way that his eighties movies did, but from the nineties, Crime Story is where he really tried something different. 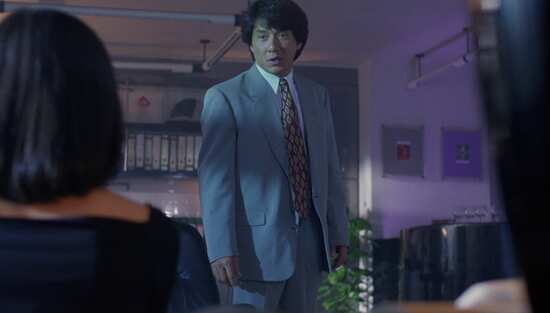 Eddie Chan is a hard working cop, who recently faced a traumatic experience whilst on duty. Yet he has no time for the attentions of the mandated psychological evaluation, and even less time when unpopular businessman Wong Yat-Fei comes to the police for help, convinced that he has become the target of kidnappers. Given that he has already faced such an ordeal once, it’s a threat the Hong Kong police have to take seriously. Sure enough, kidnappers strike, and Wong is taken for ransom, and in the process two motorcycle cops are grievously injured. As the police rush to catch up, Eddie Chan gets a new partner. Inspector Hung was the officer that broke the first kidnapping case, and he brings his insights and informants to the new situation. But it quickly becomes clear that the kidnappers have a man inside the police force, as they continue to stay one step ahead. 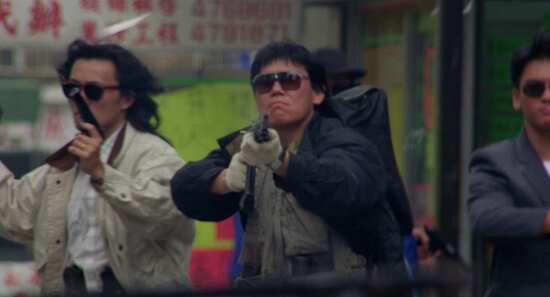 Crime Story gets a 1.85:1 widescreen 1080p transfer, and you have the choice between DTS-HD MA 5.1 Surround and PCM 2.0 Mono in both Cantonese and English, with the choice between translated subtitles, hard of hearing subtitles (dubtitles), and I assume there is a sign translation track as well. I tried the surround track first, and the experience wasn’t too bad, the action getting some decent placement, with the dialogue clear enough. But I have to say that the mono track felt a lot brighter and crisper. The subtitles are accurately timed, but there is the odd typo, and some of the translation choices might make you skip back and read twice. The image is clear and sharp for the most part, with only a smidge of black crush to complain about. The film dates from 1993, and the film stock of the period displays its usual muted colour palette, and a degree of softness. There’s only so much a 2k restoration can do with source material like that, but it’s a big upgrade over the old HKL DVD. 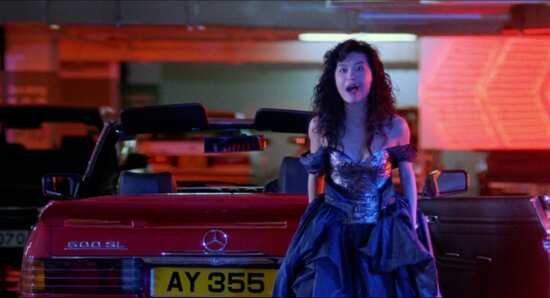 You get one disc in a BD Amaray, with a reversible sleeve. The disc boots to a static menu. 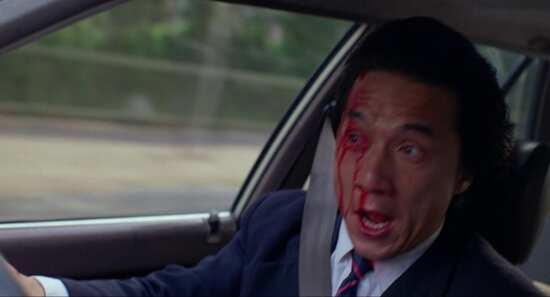 Those are the new extras on this disc; the vintage extras are as follows. 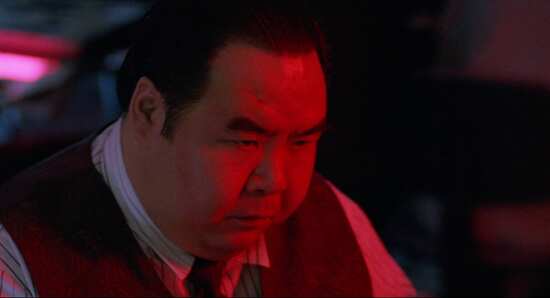 Take Police Story and take out all of the comedy, every bit of it, and what you’re left over with are the bones of Crime Story. The flesh on those bones comprise a conflicted main character, a villainous partner, amped up action, violence with consequences, and the kind of edgy content that means that Crime Story deserves its 18 rating from the BBFC. The end result is really good, one of Jackie Chan’s best films from the 1990s. It’s also based on a true story, if that sort of endorsement entices you. What boggles the mind is that Crime Story could have been even better. 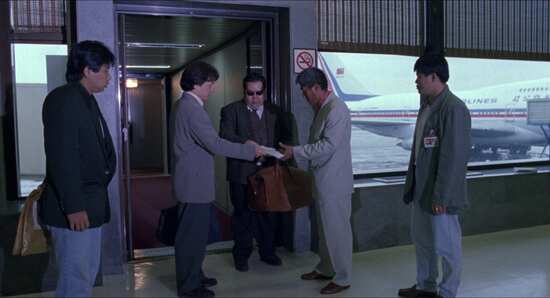 It’s all laid out in the extras, how Kirk Wong’s vision of Crime Story was so much darker than what we get here. It was initially a Jet Li vehicle, but he dropped out after his agent was assassinated! Then Jackie Chan came on board, and while initially the original script was followed, Golden Harvest in particular became nervous about subverting Jackie Chan’s screen persona to such a degree. It goes someway to explaining why the psychologist plot arc really just fizzles out in the middle of the film. Somewhere there exists an original cut of Crime Story... 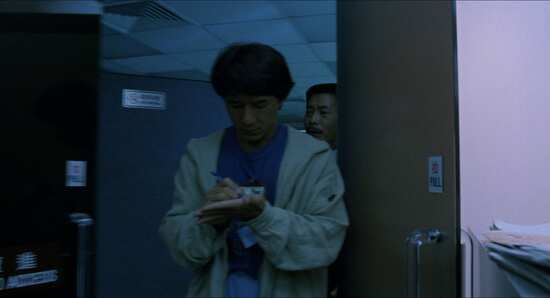 This could have been a blend of Heat, Ransom, and Mad Detective (or Lethal Weapon), but in the final analysis, the touchstones here are Heat and Ransom, as Eddie Chan quickly proves by his actions and dedication that whatever trauma he felt, he certainly isn’t affected by it. He quickly puts the psychologist in her place with his furious dedication to duty. We get a dry run of the kidnapping at the start of the film, but the first real action sequence is the flashback to that trauma, a gunfight powered by automatic weapons in the Hong Kong streets, taking a page straight out of Heat’s book. 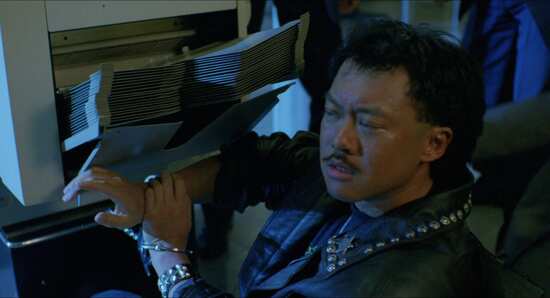 The film also isn’t shy about getting its twist out there right at the start, when one of the kidnappers on that dry run, after having a bit of raunchy sex with a prostitute in a lift, walks into the police station. He’s a cop! Eddie Chan is angry and frustrated to begin with, affronted at the idea of having to protect the kind of businessman who won’t pay his employees, and is happy to use the police to stop them from demonstrating, under the pretext that they might be the potential kidnappers. So when the kidnapping happens, the investigation kicks off, and Chan finds that he’s constantly being frustrated by the mole in the force, as well as his lackadaisical new partner, the slow burn to his inevitable explosion is palpable. It’s a great performance from Jackie Chan, far removed from his loveable underdog character, even if it’s nowhere near as dark as originally intended. 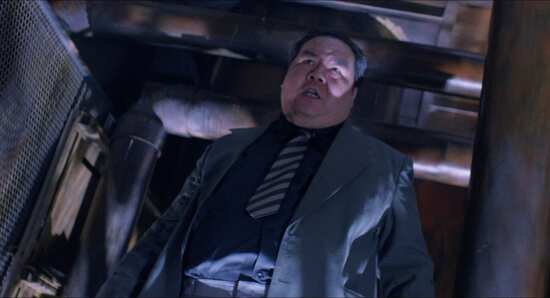 There’s also a fair bit of political comment, with the Hong Kong Police having to liaise with the police in Taiwan, and the police in mainland China. The film’s set in 1990, although filmed in 1993, but already it’s clear the filmmakers can see the direction of travel in the local political situation. Crime Story is Police Story without the yuks, but what’s surprising is that it’s still almost as good. The Blu-ray from 88 Films is pretty good when it comes to image and audio, but there are a couple of niggles in presentation that would quickly get ironed out over the next two years, to the point that they’re giving us brilliance like the Young Master Collector’s Edition.