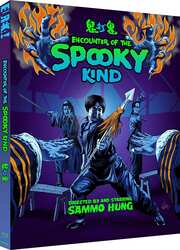 Review for Encounter Of The Spooky Kind

I may not be the biggest fan of horror, but I do appreciate the odd horror genre mash-up. I do still shy away from such films by force of habit, so it wasn’t until last year that I finally got to see the kung-fu-horror-comedy collision that was Mr Vampire from 1985. It was surprisingly entertaining, getting the balance between its constituent parts just right. It certainly made me open my mind a tad with respect to other films in this multi-genre. So you can understand why I paid attention when Eureka Entertainment announced Encounter of the Spooky Kind. From 1980, it’s touted as the film that actually kicked off the jiangshi Chinese Vampire genre of which Mr Vampire is perhaps the best known example. It’s also one of the first films that Sammo Hung directed for Golden Harvest, certainly the first from his own production company.

Big Guts Cheung drives a cab for a living, but he thinks he’s got a good life, happily married, and with a bunch of friends who like pulling the odd prank on each other, especially spooky pranks. But Cheung’s life is going to take a turn for the worse. Master Tam is a big man about town, and he’s having an affair with Cheung’s wife, and when he realises that Cheung is liable to find out, he decides to pay a sorcerer to put a fatal curse on Cheung.

Encounter of the Spooky Kind gets a 2.39:1 widescreen 1080p transfer. In a nice indication that boutique labels pick up on feedback, this is the first disc I’ve seen that adds details with regards to the audio options available. You get the original theatrical Cantonese audio, and I discovered this time that the Alternate Cantonese audio is the sound that the film would get on the video release (I’ve recently learned that these VHS remixes are usually of better quality than the theatrical audio). The original English dub from the VHS is here, and all three soundtracks are in PCM 1.0 mono format. There is also an Alternate English dub, given the DTS-HD MA 5.1 Surround treatment, and you have the option of translated English subtitles and a signs only track.

Another back catalogue martial arts title gets a stunning presentation on Blu-ray. The image is clear and sharp, it gets a proper filmic presentation with a nice layer of grain. The film gets rich and vivid, yet naturalistic colour reproduction while detail levels are excellent. The audio works well enough, and I find that the theatrical audio is just a tad harsher than the alternate Cantonese track. The action comes across well enough, with the jumping vampires hitting the ground with some serious low end (it would have been epic if this had a 1.1 mono track with subwoofer support). I’m being a little facetious, but you will feel the bass if your speakers are good enough. The dialogue is clear and the subtitles are free of typos and accurately timed. If there are nits to pick, it will be with the original source and not the transfer, and other than the odd moment of softness, the film has had an impressive restoration.

The disc boots quickly to a static menu.

The first run release of the film will get a 24 page booklet with writing on the film from James Oliver alongside stills and production art.

The following extras are on the disc.

I have to make a few allowances for Sammo Hung movies, especially those from the eighties; films like the Lucky Stars trilogy and so on. The issue is that of comedy misogyny; there’s always some moment in a film where a woman is comically objectified. At these points in the film, I have to figuratively press pause, to remind myself that they are from a different time and place, and a society with different mores. It’s the Benny Hill reset that I have to do watching a lot of content from times past, and it’s usually not a big deal. But Encounter of the Spooky Kind is a film too far, it’s the point where I just go, “No man, that’s just too much”. It’s also not too great a film, the failed prototype to Mr Vampire’s production release model.

For me, Encounter of the Spooky Kind just doesn’t get its blend quite right. It kicks off as it means to go on, with a couple of ghosts having a disembodied conversation about who their next victim is going to be, and then poor Sammo comes walking by. It’s a nightmare of course, and he wakes to the less than loving attentions of his wife. We then get a picture of his daily life, pulling a cab for a living, and we meet some of his friends, where we see the kind of pranks they pull on each other. Their first challenge to Sammo is to recreate an urban legend in front of a mirror in an abandoned building, at which point his friends will try to scare him. Of course no one realises that the mirror is actually haunted. This sets up some idea of this film’s world before the story begins, and we meet Master Tam, the official that is having an affair with Cheung’s wife.

It’s when Cheung suspects that affair that Tam acts, paying a Daoist Sorcerer to curse Cheung. The sorcerer’s scheme is to get Cheung with another bet, to spend another night in a different haunted building, only this one is resident to a hopping vampire that the sorcerer controls by remote. The plan is to kill Cheung with the vampire. Fortunately for Cheung, the sorcerer’s fellow clansman is offended by this fall to evil, and he helps Cheung deal with the vampire with some words of advice. So Tam and the sorcerer turn to plan B, framing Cheung for the apparent murder of his wife, when he returns to a blood spattered home to be arrested by a conveniently placed policeman.

The comedy does work at first, but it loses its effectiveness with the spookiness. There’s a sense of mild gore and nastiness that increases as the film unfolds. It’s not so funny once people start dying, while the goofy sorcerer and Cheung’s saviour don’t help. The saving grace to the film is the kung-fu action sequences, which as choreographed by Sammo Hung are as inventive and energetic as you might hope for, although it’s not quite as emotionally effective in a climax where the participants are being possessed by various spirits to wield different styles of kung-fu. But in the final analysis, it’s the misogyny in this film that puts the final nail in the coffin in my estimation. Cheung’s wife doesn’t even warrant a name in the film, and when the ‘adulterous harpy’ gets her comeuppance at the end of the film, it leaves a sour taste.

Eureka Entertainment’s presentation of Encounter of the Spooky Kind is up to their customary standard, with excellent video, solid audio, and their usual well curated extra features, but when it comes to Sammo Hung kung fu movies, Millionaire’s Express couldn’t come fast enough to wash the aftertaste of this film out of my mouth.