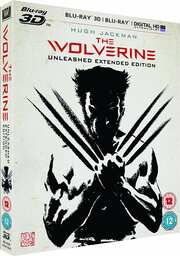 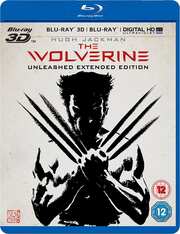 Review for The Wolverine 3D

This is going to be a quickie review, after all, I reviewed The Wolverine Blu-ray a few years ago when I picked up the standard release from a bargain bucket in a supermarket. But I did come away from that impulse purchase with a regret at not having done my usual reading around before committing my wallet. I subsequently learned that for a few pounds more, I could have had the Unleashed Extended Edition, which not only had the theatrical version on one disc, but the extended version on a second disc, and a 3D presentation of the theatrical version on a third. I wasn’t going to spend that much on an average film, and gave up on the idea. But since then, Disney has bought out Twentieth Century Fox, have obviously decided to move away from the idea of keeping a large catalogue of titles on manufactured discs when they can stream them online instead, and have also decided to end the Fox name. That means they’ve effectively dumped all of their Fox stock on the market, and now these films are almost being given away. I found the Unleashed Extended Edition of The Wolverine in a pound store, for less the difference between the two bargain bucket versions from five years ago. Seriously, if you’re into the X-Men franchise on Blu-ray, go pound store hunting!

Following the events of The Last Stand, Logan has disassociated himself from the Wolverine moniker, indeed has disassociated himself from civilisation, preferring the solitude of the wilderness to better wallow in his guilt, following what he had to do to Jean Grey. But life has a way of calling people back, as happens when a Japanese girl named Yukio comes looking for him. A man from his past wants to see him. Logan first met Yashida during the bombing of Nagasaki, and saved his life. Now Yashida is dying, and wants to say his goodbyes. As Yukio reminds Logan, refusing a dying man would be dishonourable.

But the fact of the matter is that Yashida wants to see Logan for one last chance at immortality, offering him the gift of mortality in return. It isn’t to be, as Yashida dies soon after, while in his will he’s left his fortune and business empire to his granddaughter Mariko, shunning his son Shingen. Pretty soon, the Yakuza are after Mariko, even attacking at Yashida’s funeral. In the mayhem, Logan grabs Mariko and they go on the run. But keeping Mariko safe might just be impossible. Yashida failed to become immortal, but Logan somehow received his ‘gift’ anyway. Logan’s mortal now, and his wounds aren’t healing.

This time around, I’m finally getting a look at the extended edition.

There’s not a lot I can really say here when a film gets a pixel perfect 2.40:1 widescreen transfer and an absolutely thumping DTS-HD MA 7.1 Surround English track. You also get DD 2.0 English, and DD 5.1 Surround Spanish, French, and Portuguese, with subtitles in English, Spanish, and Portuguese. It’s a faithful representation of the film, with excellent detail, great contrast, and faithful colours, while the dialogue is clear even when the action threatens to overwhelm the speakers, and the unmemorable music drives the pace of the film. It’s all down to what you think of the source material, whether the fact it’s another teal and orange action movie will make your head sink in disbelief, whether you roll your eyes at some occasional unpolished CGI, or some poorly considered action sequences. There are flaws in The Wolverine, but not in its transfer to disc.

You get three discs in a BD Amaray with an o-card slipcover, two discs on a central hinged panel. There is also a code for a digital download, if it hasn’t expired yet, basically everything but the kitchen sink. Following an antipiracy thank you, the Extended Version disc boots to an animated menu.

There are two extras on this disc, although I wouldn’t get too excited about a Second Screen App.

That leaves a commentary from the director James Mangold, which is pretty standard for such things.

The Theatrical Version is the same disc as before, and contains the following.

The big extra on the disc is The Path of a Ronin, a collection of featurettes which in total run to 53:54 courtesy of a play all option. They look at adapting this particular comic book story, filming in Japan and building sets, casting the film, and training up for the action sequences. It’s a nice, in depth documentary with input from all the key players behind the film.

And this is why I have written a quickie review. This isn’t like the Theatrical Version and Director’s Cut of Daredevil. There’s not a lot of difference between the Theatrical and Extended Versions of The Wolverine, and I may as well link to my original review at this point if you want to know my opinion of the film in all its detail.

The Extended Version adds a few more character beats, but really makes the most of its room for two more action sequences, one in the middle of the film, and one at the climax, but it does nothing to address my initial criticisms of the film, that of the daft bullet train sequence, and the ultimate conclusion of the film, which both tend to detract from a story that is otherwise smarter and has more of its own voice compared to the average comic book adaptation. Mangold and Jackman would finally get the right balance at the third time of asking with Wolverine spin-offs when it came to Logan, which makes The Wolverine something of a halfway house between that and the Origins movie.

Still, I did enjoy it a little more the second time around, although that is more likely down to familiarity with the material rather than finding anything new in the Extended Version. Certainly there were no new plot arcs, no new revelations, and no structural or pacing differences. It’s a solid Blu-ray presentation, and well worth getting if you pay what I did for it... in a pound store!