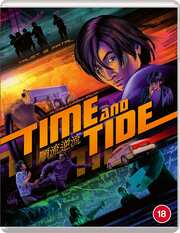 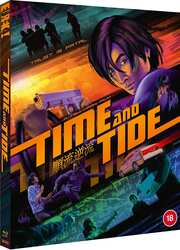 Blu-ray
The Bride with White Hair

Review for Time And Tide

I didn’t have too much joy with the first of Eureka’s unsolicited discs this month, or if there was joy to be had with One Armed Boxer, it was totally unintentional; one of those films which are good because they are bad. The second unsolicited disc looks a lot more promising though, a Tsui Hark action thriller made in the year 2000, when creative freedom was yet to be stifled in Hong Kong. You can tell from which period it comes as one of the taglines listed on IMDB is “No tigers, no dragons... just a hell of a lot of bullets.” With the Columbia logo at the head of the movie, you can tell that Hollywood were poised for a Chinese invasion on the back of the insane success of Crouching Tiger, Hidden Dragon. As it is, I had never even heard of Time and Tide until the check disc dropped into my in-tray.

There are moments that can change the entire course of your life. For barman Tyler, it was getting drunk and then having a one-night stand with an undercover cop. Nine months later, he’s about to become a father, although the mother loathes him, and he’s in mind of making some quick money and jetting off to a beach somewhere in South America. To that end, he’s now got a job working as a bodyguard in a rather sketchy security firm. His friend Jack is an ex-mercenary trying to make a new life with a wife who is also expecting, and one of the jobs that Tyler has is to provide security for Jack’s father-in-law on his birthday, although Jack isn’t exactly welcome at the party.

Speaking of South America, Jack’s former mercenary team has just scored big in a brutal armed robbery there, and they’re now looking to head to Hong Kong for new investment opportunities, and they want Jack back on the team, whether he wants to rejoin or not.

You have the choice between DTS-HD MA 5.1 Surround Cantonese and English and with translated subtitles, HOH subtitles for the English audio, and a signs only track. Actually, in the original Cantonese version that I watched, there is also plenty of Spanish dialogue, and a bit of English as well, although the English accents could also use some subtitles. They are accurately timed and free of typos, although one of the songs within lacks lyric translations. The image is clear and sharp, and there are no issues with compression or the like. The transfer is really quite good, with excellent detail and rich colours, bringing across the stylised action cinematography. About the only nit to pick might be some dodgy looking special effects, but the story is good enough to let you suspend your disbelief.

The disc boots to a static menu, which reproduces the film’s striking, comic-book style cover art.

From the Setup menu, you get the two audio commentaries, one from director Tsui Hark, and once from Asian Film Expert Frank Djeng.

The first run release will also get a 20 page booklet with writing from Stephen Teo alongside stills and promotional imagery.

There’s a scene in Tyler’s apartment where you can make out a Trainspotting poster on a door. That image stayed with me through the film, as with the opening voice-over, freewheeling and philosophising its way into the film, and the narration continuing through, introducing a colourful cast of characters and an intertwined and surprising narrative that often seems out of control, it feels like Time and Tide very much wants to be a Hong Kong Trainspotting, in tone and style if not in content.

Time and Tide is a fast paced action crime thriller, so breakneck that I had a hard time keeping up with the narrative. It doesn’t help that the film isn’t too bothered with remaining coherent, really more intent on delivering the action sequences with breathtaking style and energy. This is a case of style over substance, but saying that, there is still a lot more substance in Time and Tide than most of the films that I usually accuse of being pretty but vacant.

Tyler seems to be a happy-go-lucky guy, but a drunken one night stand with a lesbian undercover cop leads to him having to live up to his responsibilities. She gets dumped by her girlfriend, gets sacked from the force, and yet decides to keep the pregnancy, although she isn’t too keen on Tyler sticking around. He states that he wants to make some money quick and escape to a beach somewhere, but it turns out that the money that he makes in his bodyguard job, he sticks under her door to support her.

At the same time Tyler’s friend Jack is an ex-mercenary who is married to a mob-boss’s daughter. She’s estranged from her family as a result of her choice of husband, but they try to build bridges by attending her father’s birthday party, a party where Tyler is working security. It doesn’t go well.

That’s nothing compared to what happens when Jack’s teammates show up in Hong Kong, having just committed an armed robbery in South America. They want to go into business in Hong Kong, and they want Jack back, and they’ll do whatever it takes to get him back, including attacking his in-laws and his wife. So Jack decides to pre-empt them by attacking them instead, and taking their South American loot to get his family a comfortable life. By this point Tyler’s company has been hired to ‘protect’ the mercenaries, and the two friends wind up on opposite sides, the mercenaries’ boss is killed, the money goes missing, and both Tyler and Jack are being hunted by the mercenaries as well as the police investigating the assassination.

It’s a barely controlled mayhem of a story, but it’s utterly compelling, and wonderfully stylish. You might not know what’s going on, but you’ll stick with it to see what will happen next, and hope that it will all make sense by the end. It might not make sense when the end credits roll, but it’s the kind of puzzlement that will make you want to watch the film again. The action sequences are intense and energetic, brilliantly choreographed and wonderfully inventive. The characters are rich and compelling, with great dialogue and plenty of depth, despite the light, comedic tone to their interactions. Bullets fly, and the gunplay is extensive, but it’s a curious joy to have a protagonist who makes his way through the movie, armed only with an Airsoft gun, a toy he bought solely to look the part as a bodyguard, as he couldn’t be trusted with the real thing. Time and Tide gets an excellent presentation on this Blu-ray, although it looks deceptively light on extra features until you look in the Setup menu.