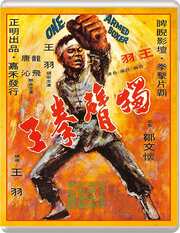 Review for One Armed Boxer

For obvious reasons this past year, I’m not approaching unsolicited review discs with my usual weary sigh of resignation, and putting them to the bottom of the pile, where some discs still reside even to this day (maybe one day I will get around to watching Norwegian Ninja). I’m actually looking forward to the odd lucky disc that arrives, courtesy of a hopeful distributor or speculative PR company. I’m being challenged once more, made to step out of my comfort zone, although not too far outside when it comes to One Armed Boxer from Eureka Entertainment. It is after all, a kung-fu movie, and I watch plenty of those. But I haven’t seen too many from the early seventies, and I haven’t seen too many that don’t have some element of comedy to them. This one’s from the era of Bruce Lee (one of those gaping holes in my film education), although One Armed Boxer stars Jimmy Wang Yu.

Two rival groups are at loggerheads. The Zhengde School represents the town’s workers, with interests in the local factories, while the Hook Gang are more of a criminal organisation, dealing in drugs and prostitution, and throwing their weight around. When their bullies raise a ruckus in a tea room, Yu Tien Lung, 2nd brother of the Zhengde steps up to defend the innocent. It’s the escalation of a feud that sees things turn lethal, when the leader of the Hook Gang enlists some foreign fighters to bring some martial arts to break the Zhengde’s kung fu. With the master and the 1st Brother killed, and Yu Tien Lung horribly maimed, his only hope for revenge is to learn the Crippled Fist kung-fu style.

One Armed Boxer gets a 2.39:1 widescreen 1080p transfer, with the choice between PCM 2.0 Mono Mandarin, Alternative Mandarin, and English dub, with optional translated subtitles and a signs only track. The image is really quite good, getting the kind of restoration that you’d wish certain back catalogue Hollywood titles would get. It’s clear and sharp, with rich colours and fine detail. Contrast is good, and if you do see any issues, most likely they will be in the original source, misjudged focus and extreme anamorphic effects and the like. The audio is adequate, the dialogue is clear and the action comes across well, although there is that harshness I’ve come to expect from older tape audio. This is also another movie where you’re trying to place the original films that the soundtrack is lifted from. The main theme to One Armed Boxer has a whole lot of Shaft to it.

The disc boots straight to a static menu.

The first run release will also get a 20 page booklet in the case, with an essay from James Oliver, and the appropriate excerpt from The Ultimate Guide to the Martial Arts Movies of the 1970s by Dr Craig D. Reid reproduced.

I should have read the booklet before I watched the film, as it addresses many of my questions and criticisms. Given my history with the genre, you can understand why I would compare One Armed Boxer to the majority of the kung fu films I have seen, most of them from the eighties. It turns out that One Armed Boxer comes from the start of a period that was the genre’s renaissance, and its director/star Jimmy Wang Yu was apparently leading this new wave, even though he wasn’t actually trained in martial arts himself. That goes a good way to explaining why I didn’t appreciate One Armed Boxer, found it somewhat weak and unimpressive. When you’re used to seeing martial arts cinema from the likes of Jackie Chan, Yuen Biao, Jet Li, and Donnie Yen, the simple and lightweight choreography of One Armed Boxer, and the lacking skill of its star really doesn’t bear close scrutiny.

You get a different perspective though, when you think that One Armed Boxer was blazing a trail in its own way. Maybe the rivalry between two kung-fu schools wasn’t the cliché in 1971 that it would become in subsequent years, and maybe the idea of the film’s hero learning a new form of fighting to avenge a fallen master was a fresh idea, although I’m cynical enough to doubt this. One thing that does quickly become apparent in a film that is absent of any sort of deliberate comedy or wit, is that this is a far more brutal and bloody affair compared to the kung-fu that I’m used to. Broken limbs, gouged out eyes, multiple fatalities and buckets of blood are present in this film, even before the titular loss of limb.

Yet when you see how that limb is lost, you won’t be able to take One Armed Boxer seriously; I certainly couldn’t. It’s deadly serious in its own story, without a hint of irony, but its deadpan nature slowly starts to remind you more of Leslie Nielsen than anything approaching a serious drama. The plot is formulaic to be sure, but at one point I was certain that Eureka had received half a print, and had to patch together what they could to make the film work. Once the protagonist has suffered his loss, he finds himself in the capable hands of someone who can heal his wounds, and can teach him the Crippled Fist that can help him with his revenge. He also meets a girl too. And rather than waste our time with a fast-edited montage, they actually just show a photo slideshow of these events. Were it not for the unbroken soundtrack, I’d suspect that someone had indeed lost the film.

The antagonists that are introduced, are supposed to be fighters from around South East Asia and Japan, masters in karate, kung-fu, taekwondo and kick-boxing, but these seem to have been researched with the same detail that Ian Fleming anecdotally applied to sumo wrestlers (and their retractable testicles). Certainly the Indian yoga expert, a Chinese actor in obvious blackface has daft fighting skills that will make you double take. These caricatures are designed to get the appropriate responses from the, I assume insular domestic audiences of the early seventies in Hong Kong, but for a more cosmopolitan era, it’s just something else to laugh at.

And One Armed Boxer really is an object of ridicule once you take it out of its context in Hong Kong film history. Seen today with its ridiculous characters, a fanged villain from Okinawa, inflatable Tibetan monks, the stop motion Indian, it becomes a film to laugh at following a night out, lubricated with lager and flirting with death with a questionable kebab. It’s the kind of movie that Clive James would have had a field day with. But don’t try to take One Armed Boxer seriously, or you’ll never enjoy it.