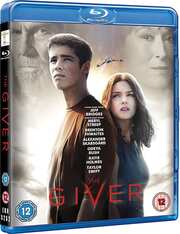 Review for The Giver

I’ve managed to avoid the young adult movie phenomenon thus far, although you could argue that the final few Harry Potter films fall into that bracket. And when you consider the time I’ve spent on shows like Buffy the Vampire Slayer, Roswell, and Smallville, you could say that I got my young adult fill on the small screen long before it occurred to filmmakers to turn a buck in that genre as well. But when it comes to the big names like Twilight, The Hunger Games, Maze Runner, Divergent and so on, I’ve managed to make it this far without having seen even one, at least to my knowledge. That changes now, as I take a look at The Giver, very much fitting into that genre given its cast, but offering the kind of sci-fi story that usually appeals to me. Incidentally, this is another film where you have to swallow the Weinstein logo before getting to watch it.

The world fell to ruin, and from the ashes of that ruin, the communities arose. Protected by a boundary, humanity now lives in enclaves where their lives are ordered and regulated, where from birth children are educated to be good citizens, are given rules to follow, and must take medication to conform to society. Even memories of the past have been erased, to keep the communities placid and pure.

At age 18, Jonas is coming up to graduation, where it will be determined what his future career will be, and like all of his friends and peers, he’s understandably anxious. But that anxiety turns out to be justified when he isn’t placed into a career at the ceremony, instead left standing when it’s all over. It’s then that he is called, and told that he will be the next Receiver of Memory. While the past is denied all other citizens, it is required that one person holds onto the memories of the past, to be able to advise the elders when needed. The previous Receiver becomes the Giver, passing on humanity’s collected wisdom, and memories of joys and of grief, now denied to society. But what Jonas learns of the past will change the world forever.

The Giver gets a 2.40:1 widescreen 1080p transfer with a DTS-HD MA 5.1 Surround English track and optional English subtitles. With a recent film, you’re left looking for flaws in the transfer rather than the original source, and The Giver looks pristine on this disc, while the audio is nice and immersive, putting you in the middle of the action, while keeping the dialogue clear. The Giver takes a page from Pleasantville’s book, initially presenting its world in monochrome, reflecting the controlled and emotionless world of the Community, but as Jonas learns more of the past, his worldview starts to change, and colour starts seeping back into the world. The monochrome imagery is clear and sharp, with excellent contrast, while the coloured sequences vary depending on the scene, subtle hints of colour in some scenes, outright Technicolor vistas in others depending on where we are in the narrative.

You get one disc in a BD Amaray case. The disc plays trailers for Transcendence, St. Vincent, and Big Eyes before booting to an animated menu. The following extras are on the disc.

Sometimes it’s useful to spot a nice touchstone and reference in a film; it gives a sense of comfort and familiarity. But sometimes, touchstones and references turn into downright remake territory. Logan’s Run presented a future dystopia where humanity’s wellbeing and prosperity was maintained due to strict population control. The Giver adds psychological control and behaviour modification to that mix, to deepen the sense of the dystopia, and once again it falls to one erstwhile rebel to uncover the truth in the past, and in the process restore his world from its off-kilter path to something that we would consider more normal.

I can’t be the first person to make this connection; it’s bloody obvious, but The Giver has been required reading in schools for twenty-five years now (American schools at any rate according to the extras), and it’s been a passion project for Jeff Bridges for almost as long. Once again, you can see that in the extras on this disc, with a reading of the first script featuring his parents, Lloyd and Dorothy Bridges, obviously filmed in the mid-nineties. It took him over twenty years to finally get the film made, finally taking the role that his father read in that video. The Giver is obviously a big deal.

The film establishes its future world really quite effectively, with a quick prologue setting the scene, before introducing the Community, where rules are strict, demanding honesty at all times, precise language, and civility to all. The people dress alike, look alike, and have their lives directed from cradle to the grave, assigned their perfect jobs, given the perfect education. It quickly starts to feel like a cult, reinforced by the medication that everyone takes, ostensibly for their health, yet it quickly becomes clear that the people are docile and unquestioning. And for all their insistence on precise language, that language is overflowing with euphemisms to keep people from questioning their leaders.

When Jonas is selected to be the next Receiver of Memory, an essential role if a society is supposed to learn from the mistakes of history and not repeat them, he becomes exempt from the rules. People can’t know what his role entails, and they can’t ever learn what he will learn, so he has to lie to begin with. And weaning off the mandated medication allows him to feel and to express his emotions, and start to see the colour in the world. He learns what humans have lost to create the communities, both good and bad, and he soon wants to bring the good back into the world. This threatens the authorities who believe that with the good of joy and love, there will also come the evils of hate and envy. The previous Receiver, now the Giver also has reason to want the status quo upturned, and so their quiet rebellion begins.

The Giver is a good film. It’s well made with strong performances, and the world design is really well accomplished. The story flows well, the characters are developed in interesting ways, and there is a degree of investment in the story that will gradually move you closer to the edge of your seat as the film unfolds. And it’s all utterly pointless if you’ve seen Logan’s Run (bonus pointless if you’ve seen Pleasantville).