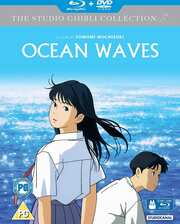 “Why did I buy this?” is not the question that I wanted to ask when Ocean Waves finally arrived, but I have to be honest and say that buyer’s remorse hit me when I opened the package, and has lingered with me ever since. The reason I bought it, of course is that this film fills that last gap that was gnawing at me in my Ghibli collection. I’m not too keen on the later films from the studio, and their output like Ponyo and The Wind Rises tends to leave me cold. But Ocean Waves is a comparatively early film, and I recall really enjoying it when I saw it on Film 4 several years ago now. 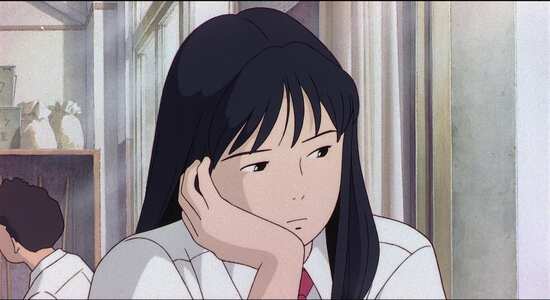 But the Studiocanal Ghibli collection rarely goes on sale, so I paid a little more than I was comfortable with, especially given that unlike the other films, Studiocanal have sourced no extra features for this release. Also, Ocean Waves is Ghibli’s shortest film, at just 72 minutes in length. Made in 1993, it was an experiment for the studio, the idea being that while Hayao Miyazaki and Isao Takahata made the big theatrical features, the younger generation of animators would turn out films more quickly and with a lower budget. When Ocean Waves took even longer to make, and cost almost just as much, with less than theatrical quality animation, that experiment died a quick death. Also, this is the one Ghibli feature film that didn’t make it to cinema, it premiered on television. No one in the West has even bothered dubbing it. And Studiocanal charges just as much for this title as they do for something like Spirited Away. As I said, buyer’s remorse... 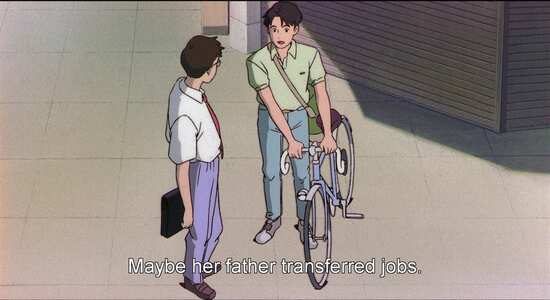 It’s a bittersweet return home for Taku Morisaki, as he boards a flight from Tokyo. The flight gives him time to reflect on events two years ago, when he was in high school, and a girl from Tokyo transferred in. His best friend Matsuno was immediately smitten by the cosmopolitan Rikako, but she had a hard time fitting in to a small town school, especially given the circumstances that led to her mother dragging her and her little brother away from the city. And when Rikako started spending more time with Taku, the strain started to show in his friendship with Matsuno. 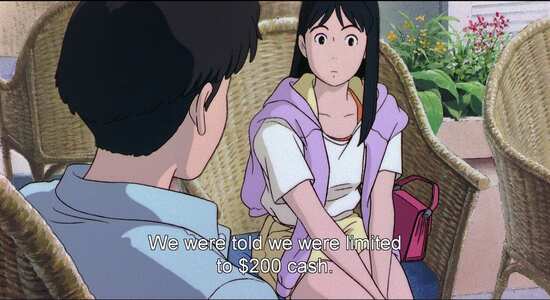 Ocean Waves gets a 1.85:1 widescreen 1080p transfer, with PCM 2.0 Stereo Japanese and with English subtitles burnt into the print (although oddly, they are presented in the usual Blu-ray font that Studiocanal use, suggesting they were at one point player generated). The audio is fine, the dialogue is clear and the music comes across well. I did notice one typo in the subtitles, but other than that they flow naturally and are accurately timed. They also seem to be a UK specific translation (I doubt the US disc would use the word “loo” as a translation for a toilet). The image is clear and sharp, a decent transfer although once again, Studiocanal have given the film a little DNR, which affects the finest of detail, and makes what grain that remains seem rather static. It’s obvious that this film isn’t quite up to Ghibli standards, with the detail in the world design and backgrounds rather average, the character designs, while typical of the studio, aren’t quite animated as fluidly. You might be forgiven for thinking that Ocean Waves was deliberately animated for television. 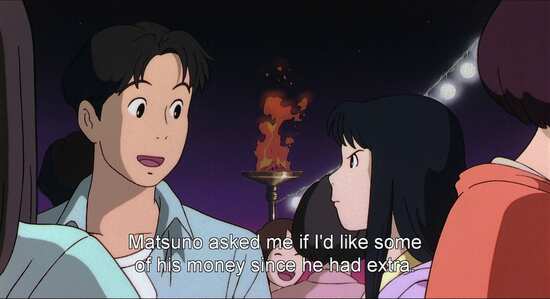 You get two discs in a BD Amaray case, one on each inner face. It’s all wrapped in an o-card slipcover. The Blu-ray boots to an animated menu.

The DVD copy of the film is merely the old Optimum Releasing disc repackaged. They haven’t even bothered to re-author the disc. It gets a 1.85:1 windowboxed transfer with DD 2.0 Stereo Japanese and locked subtitles. The windowboxing is so extreme that when I turn overscan on, it leaves enough of a black border to make wish I could turn it on again once more. The sole extra, the theatrical trailer is on the DVD, not on the Blu-ray. 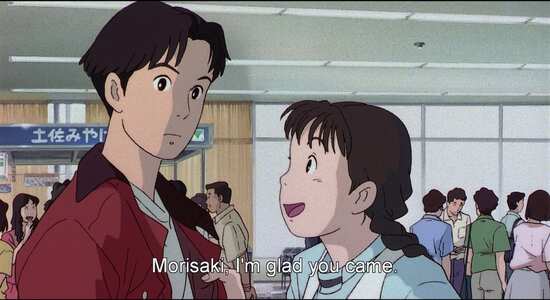 I like Ocean Waves quite a lot. It’s a nice bit of comedy drama, what we would now call slice-of-life even though it was made way back in 1993, when it wasn’t even really a genre. In terms of the runtime, it takes enough space to tell the story that it needs to, and anything else would be padding. It’s a tale of two friends in high school, best friends and the girl that winds up driving the friends apart. It’s hardly the most original of stories, but Ocean Waves manages to tell the tale with a degree of nostalgia and warmth that shifts the balance more to the comic side of things, rather than the drama. 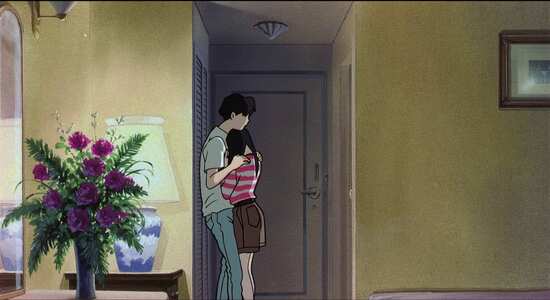 The story is told in flashback, as a college student returns to his seaside home for a high school reunion. Actually, there are flashbacks within flashbacks, as the main storyline is set two years previously, when Rikako transfers in, but we get to see how Taku and Matsuno became friends to begin with, years previously, as they bonded over their mutual rebellion against the school’s trip policy. Their Kyoto trip was cancelled because of low grades, and they were told that henceforth, there would only one trip during a student’s school life. When Rikako transfers in, that trip is pending, to Hawaii of all places, which necessitates Taku’s job to make money for it. 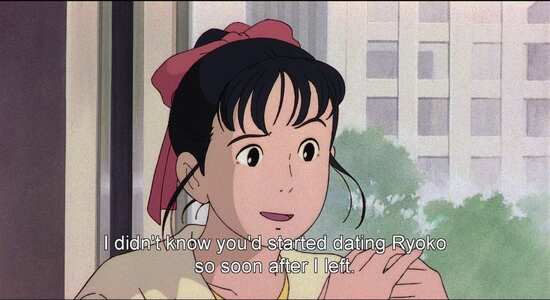 Rikako doesn’t want to be in a small town, and of the class, only Matsuno is friendly towards her, although that is mostly because of his attraction to her. Taku gets introduced as a nice guy to know, but he doesn’t interact with her until the Hawaii trip, when she loses her money, and knowing that Taku has been working, asks him for a loan. It turns out that she has ulterior motives, due to a complicated home life, and as a result, Taku winds up going with her to Tokyo over the next school holiday. 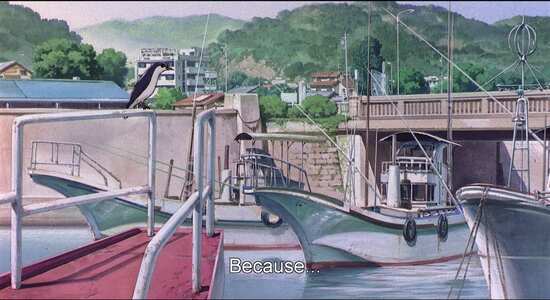 Matsuno was already peeved that she went to Taku for a loan before asking him, but when he learns that they went to the city together, it strains their friendship past breaking point. And this is the situation that Taku returns to two years later, having graduated high school, and started university in Tokyo. 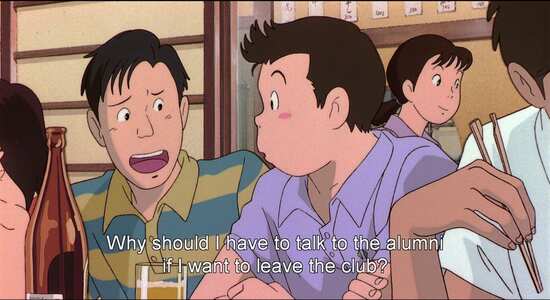 Ocean Waves’ story had the potential to overdo the angst and get overwrought, but it manages to keep the story light and balances the drama with gentle comedy and nostalgia. It never gets too heavy, and the romance manages to hold the attention without being obvious. It’s a feel-good 72 minutes, even if it feels more like an OVA than an actual feature film. What I don’t like is the way that Studiocanal have put it out there like an afterthought, with no effort on the package in terms of extras, yet demanding the same price as the jewels of the Ghibli catalogue. I have to face it, enjoyable though it may be, Ocean Waves is not top tier Ghibli.