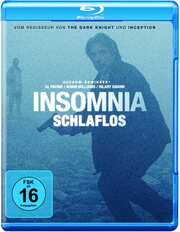 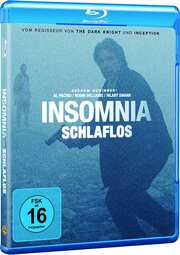 In many ways, the way Warner Brothers treat their back catalogue in high definition is a boon for double-dippers. They’ll give the film the requisite HD treatment, although usually it’s from the same HD master that the original DVD was struck from, and you get proper lossless audio as well. Then they will take the extra features from the previous DVD release, and just plonk them onto the Blu-ray, still in SD format. Usually that means you can get the Warners Blu-ray, and throw out the last DVD release, as there will be no difference between the two, except for resolution. I recently reviewed Seven, which was my old 2 disc DVD SE turned HD, and now I take a look at Christopher Nolan’s Insomnia, and I find that Warners have done the same again. Of course that can be a bit annoying for the film fan that, thanks to boutique labels like Eureka and 88 Films have come to expect great things from back catalogue films on Blu-ray, as they go the extra mile in sourcing new extra features, and 4k restorations. Anyway, I feel more justified than usual in committing the old cut-and-paste approach to reviewing this time.

A particularly brutal and calculated murder of a teenage girl is beyond the capabilities of the law enforcement of a small Alaskan town. To investigate the crime, two LAPD detectives are flown in. There is an ulterior motive though. Internal Affairs is investigating corruption in their department, and it seems politic to have them incommunicado for a few weeks. They arrive during the Alaskan summer, when the sun never sets, but the spectre of the Internal Affairs investigation follows them. Detective Hap Eckhart wants to cut a deal to protect his family, while Detective Will Dormer sees a legacy of high profile arrests about to vanish in smoke.

When a lead opens up in the murder case, the police lay a trap for the killer. However, the fog closes in, and in the mistiness Eckhart is shot when Dormer mistakes him for the killer. Dormer’s first instinct is to cover up the shooting, but then he gets a phone call from the girl’s killer. Now Dormer must keep his own actions quiet, avoid being blackmailed by a murderer, and escape the probing questions of Detective Ellie Burr, who has been assigned to investigate his partner’s shooting. And he hasn’t slept since he got there.

Insomnia gets a 2.40:1 widescreen 1080p transfer, with the choice between DTS-HD MA 5.1 Surround English, Dolby Digital 5.1 Surround German, French and Spanish with subtitles in these languages and Portuguese. The image is excellent, clear and sharp with great detail, and strong and consistent colours. It makes the most of Wally Pfister’s stunning cinematography, although the slight hint of wobble during the opening credits suggests that this is struck from the same source as the original DVD. The surround track too is excellent, really immersive and effective in bringing across the sense of isolation and paranoia, as the main character’s insomnia worsens.

I went and imported the German release last year, simply for the sake of a bargain, but this should be the same disc worldwide. You get one disc in a thin BD eco-case (with bits of plastic cut out), and the disc boots to a static menu. Incidentally, although it’s thematically accurate, the blurred image of a man obscured by mist is probably the worst cover for a release that I have seen.

As mentioned the extras are ported over from the DVD.

All of the extra video content is in SD format, and despite what I said in the opening paragraph, you might want to keep the old DVD for those extras, as the volume level is just too low.

Insomnia is an outstanding film, one worthy of being in any collection. Yet it’s fair to say that as a thriller it’s pretty run of the mill. The murder isn’t too convoluted, the cat and mouse that develops between Dormer and the killer, Finch isn’t particularly original or fresh, and the spectre of the Internal Affair investigation looming over events borders on cliché. All the ingredients of a typical fast food Hollywood thriller are there, but this is one of those rare occasions that the hamburger meat, sesame seed bun, fries, processed cheese and ketchup somehow turn into a gourmet meal.

Insomnia really excels as a character study. It’s watching the disintegration of Will Dormer that is so compelling, and of course it’s Al Pacino’s performance that is at the heart of it. I’m used to the bellicose firebrand Pacino of films like Scarface, Heat and Scent Of A Woman, characters with flashing eyes and bellowing speech, an American Brian Blessed. In Insomnia we find a subdued and understated Pacino. Dormer is a world-weary, beaten man, haunted by his demons, carrying the burden of his guilt. Pacino gives a measured performance that is as mesmerising and as charismatic as anything he has done.

It’s that understatement that infuses the film, which lifts the thriller aspects above the mundane. The IA investigation that drives the wedge between Dormer and his partner could have been clichéd, but it’s played so matter of fact, without excessive drama that it never once feels hackneyed. The shooting of Eckhart, the girl’s murder and the hunt for the killer all feel like subtext, underlying the journey into Dormer’s psyche.

The supporting cast give strong performances. Robin Williams makes for an effective and intelligent villain in Finch, one who avoids the usual formula by just being a normal, ordinary fellow. Of far more interest is Dormer’s relationship with Ellie Burr, as played by Hilary Swank. She is the local detective assigned to the case, and the two develop a mentor student relationship based on mutual respect. It’s interesting to see Dormer’s desire to cover up his actions conflict with his wish that the young detective remain untainted. In fact, it’s easy to see Finch as the devil on Dormer’s shoulder, urging him to do wrong, while Ellie is the angel on the opposite flank advising honesty.

The film is effective in showing Dormer’s state of mind and his dissociation from reality as his insomnia deepens. The constant daylight is unnerving and the cinematography makes the most of that. Night-time is only apparent when the streets are deserted, yet the longer Dormer stays awake, the brighter and more exposed everything seems. Add to that the altered perceptions and hallucinations that come with lack of sleep, which are effectively realised through editing and sound design. This being a Christopher Nolan film, there is a hint of fractured narrative, an unexpected twist and the tendency to play with audience assumptions.

The Blu-ray offers nothing more than the original DVD, other than HD quality picture and lossless audio, but as so often happens, this is more than enough to justify the double dip. This might be Christopher Nolan’s most conventional film when it comes to its narrative, but that’s a comparative statement. It’s still enough of a puzzler to get you contemplating while you watch it, and after the end credits have rolled, but it’s not so esoteric as to get you posting befuddled memes on Twitter.